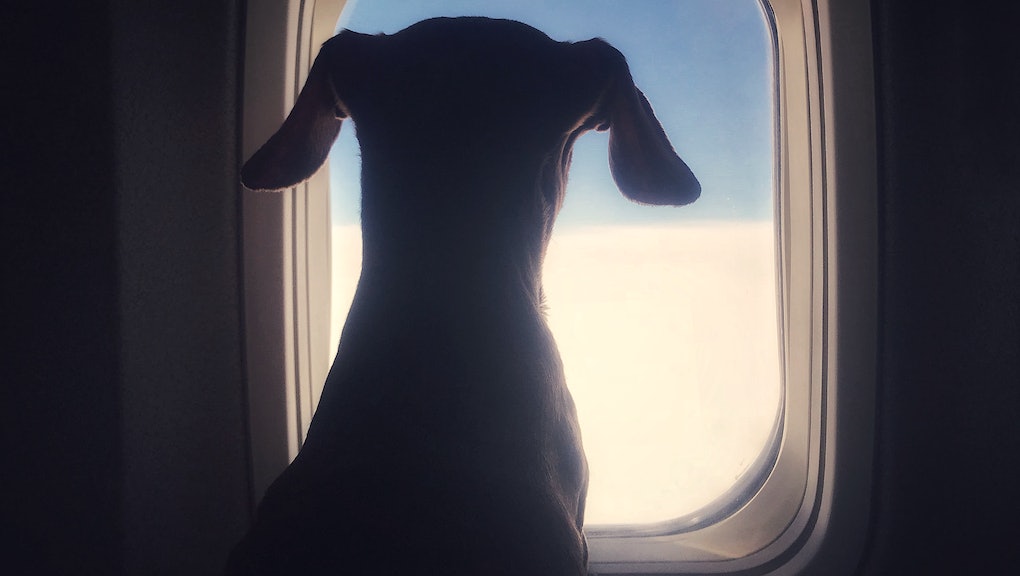 Starting in March, Southwest will no longer allow emotional support animals on its flights, the airlines announced yesterday. Sure, that might seem pretty cold on a first read — I mean, who’d want to ban harmless puppers from a flight? The thing is, emotional support animals aren’t harmless. In fact, they can compromise the capacity of actual, highly trained service animals to protect their humans. Banning them will protect disabled people who heavily rely on their service dogs to stay safe.

Now, Southwest passengers who want to fly with their cat or dog need to keep them in a carrier small enough to slide beneath a seat, as well as pay an additional fee, CBS News reports. Southwest’s announcement makes it the latest of the U.S.’s six largest airlines — including American Airlines and Delta — to ban emotional support animals in the wake of the Department of Transportation’s revision of its animal policy in December. In yet another example of why we can’t have nice things, some passengers took advantage of the old policy to avoid paying extra to fly with their animal, airlines complained.

Over the years, passengers have taken some truly creative liberties in defining “emotional support animal.” In 2018, United Airlines kicked off a passenger who tried to bring her pet peacock, Dexter , per CBS News. Others have brought pigs, turtles, and even a squirrel.

Under the Americans with Disabilities Act, service animals are dogs trained in “work or tasks” that assist a person with a physical or mental disability, such as a psychiatric, intellectual, or sensory disability. For instance, dogs trained to guide people who are blind, recognize the signs of a panic attack or psychiatric episode, or alert someone with autism that they're engaging in repetitive movements, qualify as service animals. Those that provide emotional support through just being with their humans don't.

But the ADA also prohibits asking whether a service animal is legit, Vice reports, making it pretty easy to pass your dog off as a service animal when they're actually an emotional support animal.

No one is arguing that these animals don’t offer much needed comfort to their owners — but this really is a disability rights issue. The service dogs that disabled people depend on undergo years of costly, rigorous training, but you can order a vest labeled “Service Dog” on Amazon and throw it on any dog. Reports abound of poorly trained emotional support dogs lunging and growling at disabled children with service dogs, biting, and peeing. Even a well-trained service dog can find this behavior distracting — and distraction is dangerous. A distracted dog might guide their human into traffic, or miss warning signs of a seizure or PTSD episode.

People also often let others pet their emotional support dogs, which can confuse others when they come across legit service dogs that they can’t pet, again, because doing so would distract them from protecting their humans, Vice adds. And unruly emotional support animals can spur businesses to advocate against ADA rules that safeguard the rights of disabled people.

Basically, banning emotional support animals from airlines is a good thing. The emotional support of our puppers is important, but it shouldn’t come at the expense of disabled people who need their service animals to survive.

Update (February 1, 2021): A clarification has been added to address who has the right to a service animal under the Americans with Disabilities Act, and who does not.

More like this
Remember the vaping crisis? Well, it hasn't gone anywhere
By Melissa Pandika
The CDC just announced the mask era is coming to an end (sort of)
By Rafi Schwartz
Could COVID-19 lead to erectile dysfunction?
By Melissa Pandika
Stay up to date