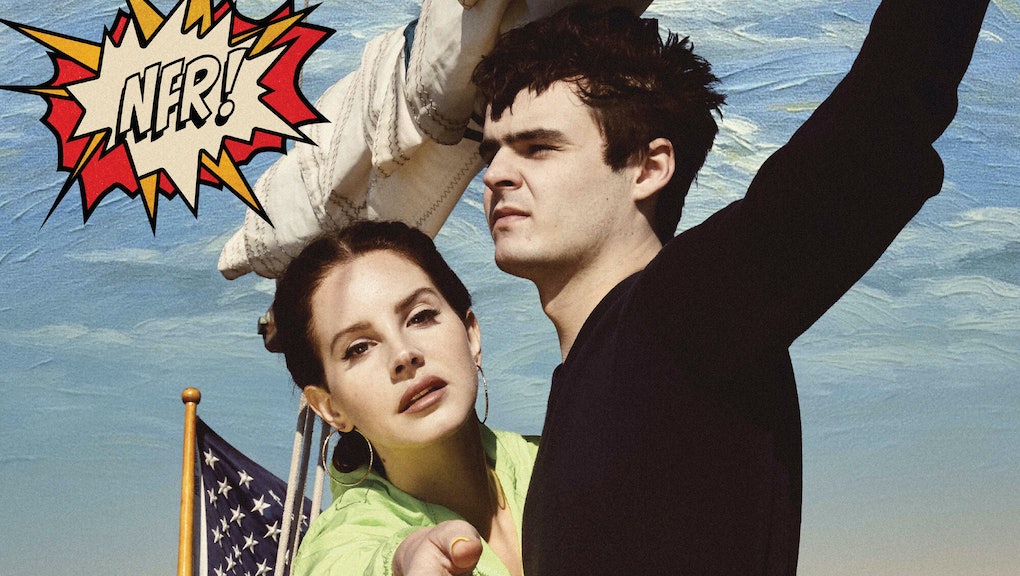 Lana Del Rey has spent a career and five studio albums musing over the promise of the American Dream; her focus is not money or success but romance—the expanse of Western highways, the nostalgia of rock and roll, Malibu’s star-studded beaches. And, being a straight woman, falling in love with emotionally detached men. Men play crucial characters in Del Rey’s stories: there’s Bill, and Joe, and John, motorcycle-riding, guitar-playing, manual laboring men who are interested but aloof, who dance all night but never open up. Her tale is dotted, Odyssey-style, with men she meets on her road to wherever it is she might be going (“The men I met along the road were my only summer,” she sings on “Ride,” from 2012’s Paradise). On the way to true love, maybe.

Because of the misty, fairy-tale nature of her sound, Del Rey’s music is consistently associated with sadness. Sad on the beach, stoned and sad, sad in love. What I hear in Del Rey, though, is more like anger. Frustration with those who’ve hurt her. And on Norman Fucking Rockwell!, this frustration is sharper than ever. But so is Del Rey’s inner power. The album leads with the line, “Goddamn, man-child.” It colors the rest of the record with a knowing eye roll. She positions herself from the jump as more mature, wiser, greater than. In the video for her hazy Sublime cover, “Doin’ Time,” Del Rey appears massive, just like Allison Hayes in Attack of the 50 Foot Woman.

She towers over Los Angeles, and then we’re zoomed out to where a blonde-bobbed Del Rey is watching her giant self projected at a drive-in; blonde Lana discovers that her man has walked away to find someone else to hump in a backseat, and her massive counterpart steps out of the screen to shake things up. The two Lanas share a moment of recognition. What a silly, childish thing for that man to do, to disrespect Del Rey that way, when she’s clearly so full of power.

Duncan Cooper wrote in VICE that Norman Fucking Rockwell!’s titular opener is a nod to “Video Games” from Del Rey’s first record, Born to Die, a song that juxtaposes a man’s immaturity with her complete devotion to him. She’s always been too smart and too sensitive for games. She’s never really had time for scared little boys—and yet. Here is the paradox of being a woman, especially a woman who wants to find love and is, unfortunately, attracted to men. It is so easy to fall in love, and love is amazing. Del Rey knows this. It’s basically all she writes about. But it is often infuriating to be in love with a man because men are so endlessly frustrating. I’ve waited to note that the second line of Norman Fucking Rockwell is “You fucked me so good that I almost said ‘I love you.’” As much as Del Rey may know the dangers of “How to Disappear”’s Joe and John and their stoic, manly ways, sometimes, it just feels too good. Plus, Lana loves danger.

Lana Del Rey’s America is steeped in imagery, in archetypes, which she’s used not only to build her own self-referencing world but to focus a lens on the paradoxes and absurdities of modern life. This nostalgic America never really faded into the past, Del Rey seems to say. It’s alive and well, evidenced, most excruciatingly, by the refusal of men to learn, move on, let go, look outside themselves.

Del Rey has historically made a point to eschew politics in interviews; she’s said she’s not interested in feminism (she’s more concerned with the “future”), and in her recent conversation with the Times she claimed she is in “the middle”— a centrist, ostensibly. That may be true, but she stopped performing in front of the American flag in 2017, and she’s been outspoken about Trump, particularly about his desire to decimate women’s rights and access to healthcare, and Kanye West’s alignment with the president. She’s also concerned about climate change. On the cover of Norman Fucking Rockwell!, Los Angeles burns in the background. Doomsday’s been in the scenery of Del Rey’s music in the past; now it is painfully real. “Hawaii just missed that fireball,” she sings on the outro of “The greatest,” one of many album highlights, referring to the mistaken nuclear missile mobile alert from last January. “L.A. is in flames‚ it's getting hot / Kanye West is blond and gone.” It’s not just a frustration with the lovers who hurt her, leave her, refuse to acknowledge her worth. It’s also with the way that childishness affects everything.

So, what’s a girl to do? Earlier this year, when asked by Harper’s Bazaar what’s giving her hope right now, Del Rey answered: “Things have been confusing for a long time, whether it’s politically, culturally, personally...Any time I get stressed, I just remind myself it’s kind of supposed to be stressful. Life is stressful.” If you’re feeling a type of way, might as well feel that way at the beach, or dancing all night. If the world’s gonna burn, might as well look for love.