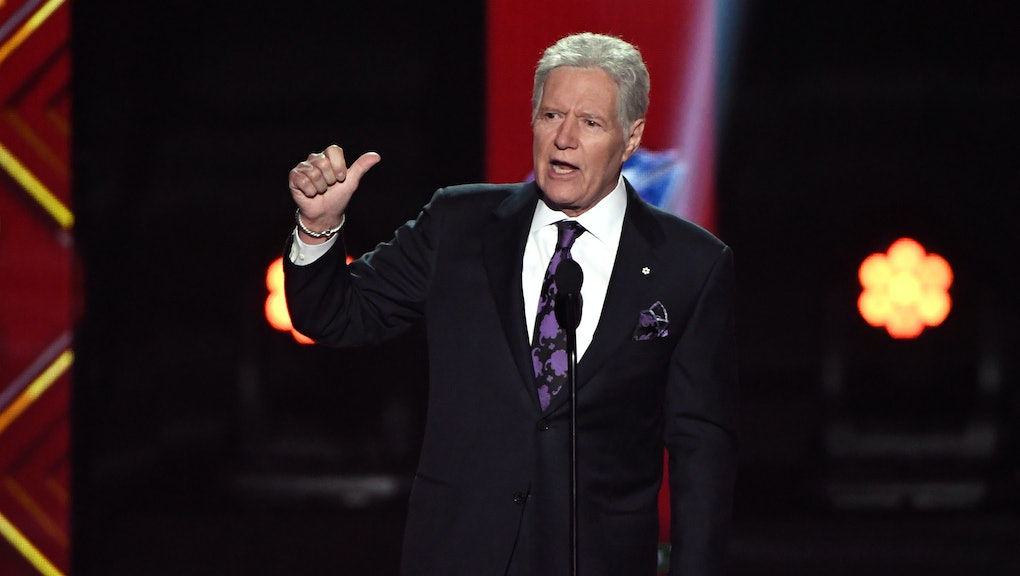 Cancer doesn’t discriminate. It comes for normal folks and famous people with equal aggression. But when a celebrity learns they have a life-threatening illness, unless they keep their diagnosis a secret, they face the complicated prospect of reckoning with their mortality both publicly and privately.

Alex Trebek, the 79-year-old host of Jeopardy, was diagnosed with stage four pancreatic cancer this March. It’s a particularly lethal form, with just a 9% five-year survival rate at that stage. He started chemotherapy treatments immediately to combat the disease, and by May the cancer was in remission. But follow-up immunotherapy treatments did “diddly-squat,” Trebek said.

At the end of the summer he learned he’d need another round of chemo, which he’s now undergoing. He kept taping Jeopardy through it all, even when crippling stomach pain had him literally writhing on the floor between takes, he told CBS Sunday Morning.

Three weeks ago, Trebek sat down with Canadian network CTV News and opened up about his own mortality. “I’m not afraid of dying,” he said. “I’ve lived a good life, a full life, and I’m nearing the end of that life […] if it happens, why should I be afraid of that? One thing they’re not going to say at my funeral as part of the eulogy is, ‘He was taken from us too soon.’”

The Jeopardy host released a public service announcement to raise pancreatic cancer awareness in partnership with the World Pancreatic Cancer Coalition on Wednesday. “I wish I had known sooner that the persistent stomach pain I experienced prior to my diagnosis was a symptom of pancreatic cancer," he says in the video, before outlining other warning signs like mid-back pain, yellowing of the skin or eyes, unexplained weight loss, and new onset diabetes.

Trebek is a familiar, authoritative presence in many homes, and grappling with the likely outcome of his cancer battle hits hard. It feels a little like losing a beloved uncle. The host himself has remained remarkably zen and pragmatic as he counsels America on his impending death. It’s hard to imagine almost anyone facing the twilight of their life as stoically.

A number of other celebrities have chosen to use their personal diagnoses to advocate for awareness and prevention. When Julia Louis-Dreyfus announced she had breast cancer in 2017, she tweeted, “1 in 8 women get breast cancer. Today, I'm the one." After her breast cancer diagnosis in 2004, Melissa Etheridge became a proponent of medical marijuana. Olivia Newton-John has been urging women to do breast self-examinations since her 1992 cancer diagnosis. (She relapsed in 2018.)

Actress Selma Blair was forced to publicly reckon with the effects of multiple sclerosis (MS) when she was diagnosed with the degenerative disease in late 2018. She debuted a diamond-encrusted walking cane at the 2019 Oscars, then two days later, Blair sat down with Good Morning America’s Robin Roberts, a breast cancer survivor herself, to talk about how she found the strength to face the disease publicly.

“I was giving it everything to seem normal,” including self-medicating and drinking, she told Roberts. “I was ashamed.” Then Michael J. Fox, who has Parkinson's disease, reached out and they began chatting regularly. “He really helped me,” Blair said. The actress added that publicly addressing her illness felt empowering. “I was a little scared of talking, and even my neurologist said, 'No, this will bring a lot of awareness, because no one has the energy to talk when they're in a flare-up.' But I do, because I love a camera," she said.

It seems Trebek is making a similar, noble choice to battle pancreatic cancer the most effective way he knows how: by talking about it on camera. He’s also giving America the chance to grapple with the fact that he may not have much time on this Earth, which is an incredibly sad reality for fans to sit with. But it’s also a really brave decision for a celebrity to make, to share their human sorrows along with their glossy public persona.