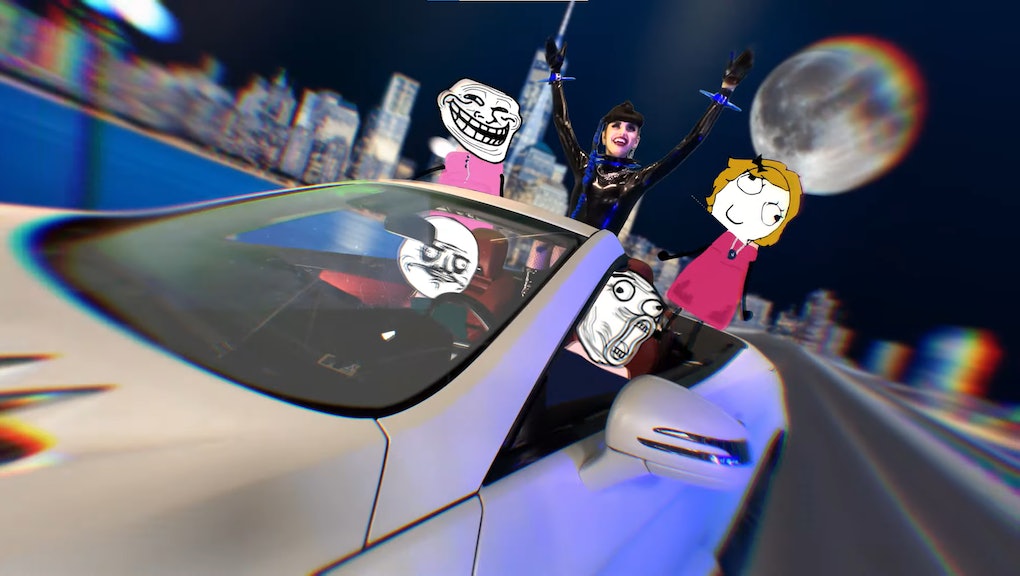 Okay, it’s Wednesday — but it’s also the 10th anniversary of Rebecca Black’s “Friday.” To mark the occasion, the viral star released a brand new remix of the song, featuring Big Freedia, Dorian Electra, and 3OH!3. So if you can just pretend that we’re headed into another weekend of guzzling down the exact same poison as the weeknights, then why don't you give the remix a spin:

“Friday” is one of those songs that feels unmoored from time. I instinctively know where I was at the time of its release — late in high school, where everyone was either leveling barbs in its general direction or spitting lines in a singsongy cadence that verged on earnest appreciation. Ten years feels like both an incredibly long time and a window that could’ve been almost twice as long, given the interceding shifts in pop and the charts.

Black’s big hit felt ubiquitous, but the Billboard charts didn’t quite reflect it. By peaking at No. 58 on the Billboard Hot 100, it never enjoyed the kind of boost from online virality that it might today. (You could argue that the run of “Friday” and “Gangnam Style” in the early 2010s was a primary driver for getting the charts to better reflect the public’s listening habits.) So it existed as a mostly online phenomenon with shorter legs on radio and download charts, but it certainly carved out space in the cultural memory.

Her remix takes the song to its jittery, pitch-shifted logical endpoint. Riding the hyperpop wave with lyrics that could pass muster in a 100 gecs song — with gecs' Dylan Brady on hand to produce — Black recruits a number of pop’s disparate weirdos who’ve brushed against the mainstream since the song premiered. Come for the super catchy update, stay for one of the 3OH!3 guys recreating A Trip to the Moon.

Black’s always seemed like one of the more level-headed young stars to graduate from memedom into something healthier. In an interview with Bustle earlier this month, Black opened up about finding her true identity, after coming out as queer and making music that’s closer aligned to her taste than “Friday.” But the harsh vitriol Black faced after her breakout hit left its mark, and she tells Bustle about how nearly a decade of therapy helped her perspective shift. “I learned that the issue was not, ‘Oh, you did this really bad thing.’ It was all of the conclusions that I [came to about] that experience. Like, 'I’m not talented, I’m ugly, I’m a mess-up, I’m stupid,’” she said of the post-“Friday” life.

Now, with a vibrant new remix and slate of other singles she’s proud of, you can’t help but think she’s carved out a lane all her own, and emerged from young viral stardom in a far stronger place than she began.