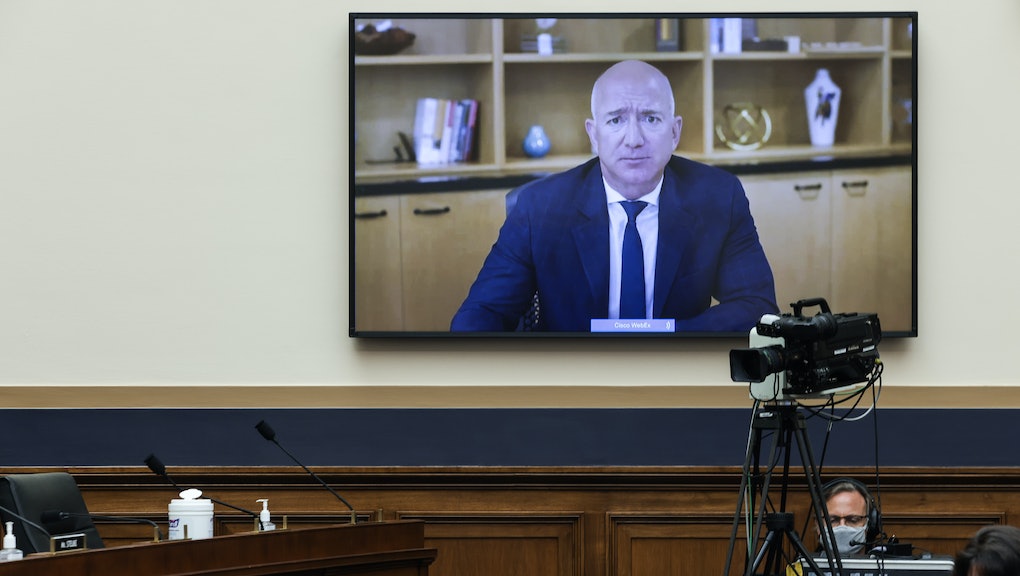 On Wednesday, the heads of the biggest companies in the tech industry appeared on what was likely the tensest Zoom call in history. Amazon CEO Jeff Bezos, Google CEO Sundar Pichai, Apple CEO Tim Cook, and Facebook CEO Mark Zuckerberg all showed up via webcam in front of the House Judiciary Subcommittee on Antitrust, Commercial and Administrative Law to field questions about their companies’ anti-competitive and monopolistic practices.

While tech CEOs typically leave these events relatively unscathed, primarily thanks to members of Congress having little grasp of the technologies they are talking about, things went differently this time. For more than five hours, the top executives of some of the most profitable companies in the world were forced to tackle specific questions about how their companies operate and answer for some of the shady and more questionable actions of their firms. The result was a lot of memory loss. Here are some of the many things that tech CEOs were seemingly unaware of occurring under their watches, suggesting that maybe these companies really are too big after all?

Jeff Bezos "surprised" by a common complaint from third-party sellers

While the vast majority of the hearing was dominated by the voices of members of Congress and the Big Tech CEOs, there was one other voice that made for a noteworthy moment during the hearing. Representative Lucy McBath of Georgia played an audio clip from an Amazon seller who claims to have been "systematically blocked" from selling textbooks on the platform despite never receiving any notice or communication from Amazon explaining why the small business was being effectively delisted.

In response to the audio clip, Bezos said he was "surprised by that" experience. "I don't understand what is going on in that anecdote because we would love for third-party sellers to sell books," he said. Plenty of third-party sellers would likely disagree. On the Amazon Services Seller forum, there are numerous of complaints from merchants who believe they were wrongly blocked from selling items without notice. Likewise, there are plenty of complaints about Seller Support being unresponsive and unhelpful when trying to deal with an issue. It appears to be a relatively common experience for Amazon third-party sellers, but the company's CEO is apparently unaware of it.

Representative Pramila Jayapal of Washington pressed Google's CEO on the company's advertising business and how it affects other sites, particularly news publications that rely on ads to generate revenue. In the course of questioning, the Congresswoman presented Pichai with a chart that showed Google increasingly generates more revenue from ads that appear on its own properties, including in search and on sites like YouTube, than ads that appear on other sites. While the split was close to 50/50 in 2004, the chart showed that nearly 80 percent of Google's ad revenue now comes from advertisements that appear on its own sites and services.

Pichai seemed to know nothing about this and said he'd have to take a closer look at the chart to see what was going on. "I would need to understand more, I just looked at it quickly," he explained. However, in hemming and hawing through an answer, Pichai did explain why Google would want to advertise more on its own platform. "When it comes to non-Google properties, we share the majority of revenue back to publishers, whereas on our properties, we have the inventory." In other words, it's more advantageous for Google to keep people on its sites, where it controls the ads and keeps more of the profit than to have users click through to a link where the ads will be worth less to the company.

While every CEO took their fair share of heat over the course of the hearings, Zuckerberg may have put himself and his company in the toughest position. Early on, Facebook's CEO effectively admitted to acquiring Instagram because he viewed the company as a threat, which is typically a no-no when it comes to antitrust law. Later in the hearing, as Representative Joe Neguse was pressing Zuckerberg of Facebook's acquisition strategy, he presented the company's founder and chief executive with an email exchange he had with an engineer. In the emails, Zuckerberg told his colleague after buying Instagram that the company could "likely buy any competitive startup, but it will be a while before we can buy Google."

Zuckerberg said he didn't "specifically" recall the exchange, but assumed that it was a joke. Representative Neguse wasn't having it. He noted that within the exchange, Zuckerberg referred to the "importance of watching Google" as a competitor and monitoring the different areas of social networking that the company involved itself in. The email exchange happened in 2012, just one year after Google launched its doomed social network Google+, and there were reports that Facebook was concerned Google might be a bidder on Instagram. So whether Zuckerberg really had his eyes on the search giant as an eventual acquisition target or not, he certainly was keeping tabs on the company.

Last year, Apple took flak for removing a number of popular parental control apps from the App Store. The decision to remove the apps came after the company launched its own parental control and screen time management tools. Apple claimed at the time that the decision was done to preserve the security of iPhone users, reasoning that third-party apps were getting control of sensitive user information.

Tim Cook was able to remember this clearly when asked about it by Florida Congresswoman Val Demings. However, when Demings pressed Cook as to why he chose to ban those parental control apps due to security concerns but then failed to ban another app using the exact same tools but just happened to be owned by the government of Saudi Arabia, Cook claimed to have never heard of the app. "I'd like to look into this and get back to your office," he said, before claiming that the company applies the rules of its App Store evenly no matter who might be developing the app.

In recent years, Amazon went from a company that sells everything to a company that does everything, including quite a bit of entertainment. Amazon acquired the massive game streaming platform Twitch in 2014 and has reportedly spent about $7 billion on producing original content for its streaming services like Amazon Prime Video. Yet it appears the company's CEO knows very little about these parts of the business.

Congressman Kelly Armstrong of North Dakota asked Bezos about streaming rights for music used on Twitch, noting that some creators have received DCMA takedown requests for copyrighted music that appears in clips of old streams. While Bezos understandably might not be up on the latest problem plaguing Twitch streamers, one would imagine he'd know if Twitch proactively licenses music so that streamers can use it. "I'm going to have to ask. I can get back to your office with an answer to that question. I don't know," Bezos said.

Likewise, Bezos drew a blank when asked about his company's negotiations with HBO. At issue is the fact that the HBO Max app is not yet available on Amazon Fire devices, a small but important consumer issue for the more than 40 million people who use the systems. Representative Jamie Raskin of Maryland noted that Amazon has allegedly been trying to squeeze WarnerMedia in negotiations, pushing the company to provide content to Amazon in exchange for allowing the company's app to come to the Fire platform. "I'm not familiar with the details of those negotiations," Bezos said, going so far as to call the negotiation with WarnerMedia "normal."

Last year, in the midst of what felt like just one, long, ongoing scandal about how Facebook dealt with user privacy, it was revealed that the company created an app called Facebook Research. Once installed, the app was given root access to a person's device, allowing it to collect a huge amount of data including private messages, emails, web searches, and browsing activity. Since no one would willingly hand over that information to Facebook, the company incentivized people to download the app by paying out $20 a month. As it turns out, about 20 percent of the people Facebook was paying for this research were teenagers.

The situation was a pretty significant scandal. It resulted in Apple pulling Facebook's enterprise certificates for violating the rules of the App Store. Senators pressed Facebook for more details about the app, fearing privacy concerns. This all apparently did not fall into the purview of the company's CEO. When presented with questions about the scandal from Representative Hank Johnson from Georgia, Zuckerberg couldn't remember. "I'm not familiar with that," Zuckerberg said on two separate occasions when asked about the Facebook Research app, suggesting he had never heard of the app and surrounding scandal.

Back in 2015, Amazon launched a program called the Alexa Fund. The idea was relatively simple: the company set aside $100 million that was to be invested into startups and innovative companies making advancements in voice technology and artificial intelligence.

When Representative Neguse raised issue with the Alexa Fund, noting that recent reports have indicated that Amazon used the fund to meet with startups only to then launch competing products, Bezos seemed unaware of what happens in that part of his company. When asked if DefinedCrowd Corporation, a company that Amazon invested in through the Alexa Fund, sounded familiar, Bezos replied, "No sir, I'm afraid it doesn't." After investing in DefinedCrowd and gaining access to its finances and technology, Amazon produced its own version of the technology that offers almost exactly the same service. "I don't know the specifics of that situation," Bezos said.

More like this
For a blessed 11 minutes, Jeff Bezos was not on Earth. Here's what he missed
By AJ Dellinger
QAnon queen Marjorie Taylor Greene got suspended from Twitter for spreading coronavirus misinformation
By AJ Dellinger
Conservative grifters are selling a cheap Chinese smartphone as a solution to Big Tech censorship
By AJ Dellinger
Stay up to date