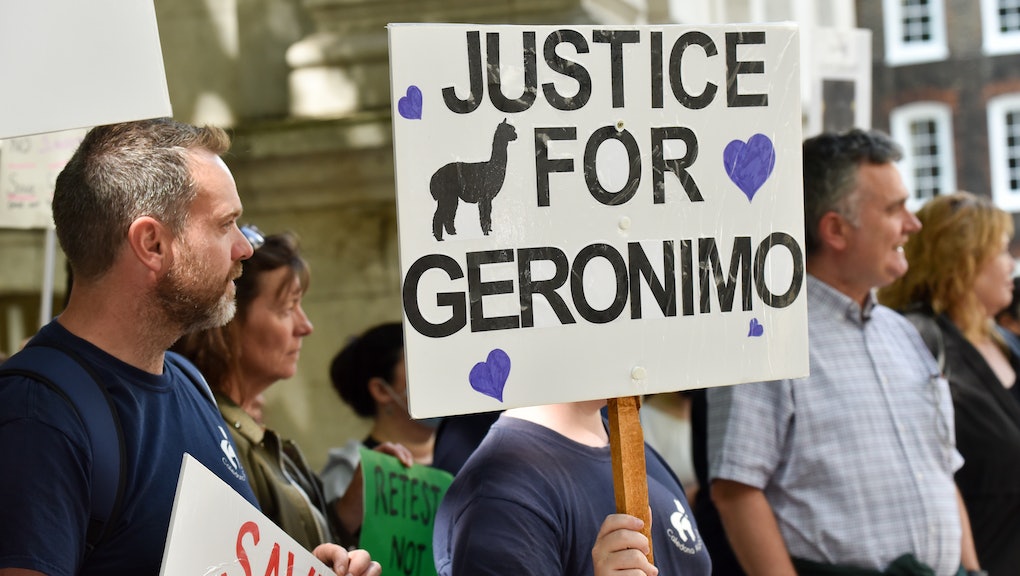 Here are a few things I know about alpacas:

At issue is farmer Helen Macdonald's repeated refusal to put down her pet alpaca, named "Geronimo" despite his having tested positive for bovine tuberculosis nearly five years ago. Macdonald, who lives with Geronimo in Wickwar, South Gloucestershire, had been ordered by the British government to kill the alpaca, after it failed two BT tests when it first arrived to the U.K. from New Zealand in 2017.

"You know, I'm not sleeping very well as you can imagine, and there's so much going that we're struggling to just ... get through the day. ... But I cannot consent to having a healthy animal euthanized," Macdonald told ITV this past Friday, just after the U.K.'s High Court rejected an appeal for the animal's life, clearing the way for agents from the Department of Environmental, Food and Rural Affairs to put Geronimo down. Macdonald has claimed Geronimo was injected with excess tuberculin ahead of being shipped from New Zealand to England.

This is, in all fairness, a situation with some legitimate emotional and public health implications. As Macdonald told ITV, "I don't know whether [DEFRA agents] will give me notice, whether they will turn up when I'm asleep and break into my house, my farm."

But even so, it's impressive to see just how much Geronimo's case has become a major issue in British politics, where leaders of both parties have somehow seen fit to weigh in on the fate of a single alpaca living in a town of around 2,000 people.

"It's obviously difficult because there's a lot of people invested emotionally in a story of an animal," Conservative MP and Business Secretary Kwasi Kwarteng admitted. "But there's a policy, and there's a reason why the policy shouldn't be stopped."

"It's a really sad situation and you can see why emotions are running really high, but farmers around here and across Gloucestershire will be familiar with having to lose their animals because of TB," Labour Party leader Kier Starmer told the press Wednesday. "It's always tragic when it happens. I don't think we can make an exception in this case. Of course it's sad — it's sad for farmers as well when they lose their animals, but we have to keep TB under control."

"I think there's no alternative sadly. I do actually understand why emotions are so high as they would be with farmers as well who on a not irregular basis have to lose animals that are very valuable to them," he added.

Environment Secretary George Eustice also threw his weight behind Geronimo's execution, framing it as part of the broader "arduous but necessary endeavor" to keep England's farm animals disease free, while citing his own "soul-destroying" experience having to put down his own family's beloved cow, Rose.

While Macdonald has unsuccessfully lobbied U.K. Prime Minister Boris Johnson to intercede on Geronimo's behalf, even Johnson's father, Stanley, has weighed in, reportedly telling The Sun that: "I hope and believe his execution can be avoided even at this late stage."

Now you know some things about alpacas. I hope this is useful for you, somehow.

More like this
Biden's new office to fight for environmental justice already faces an uphill battle
By AJ Dellinger
Scientists are potty-training cows in an effort to save the planet
By AJ Dellinger
Oops, the Arizona recount the MAGA crew demanded actually took votes away from Trump
By Rafi Schwartz
Stay up to date