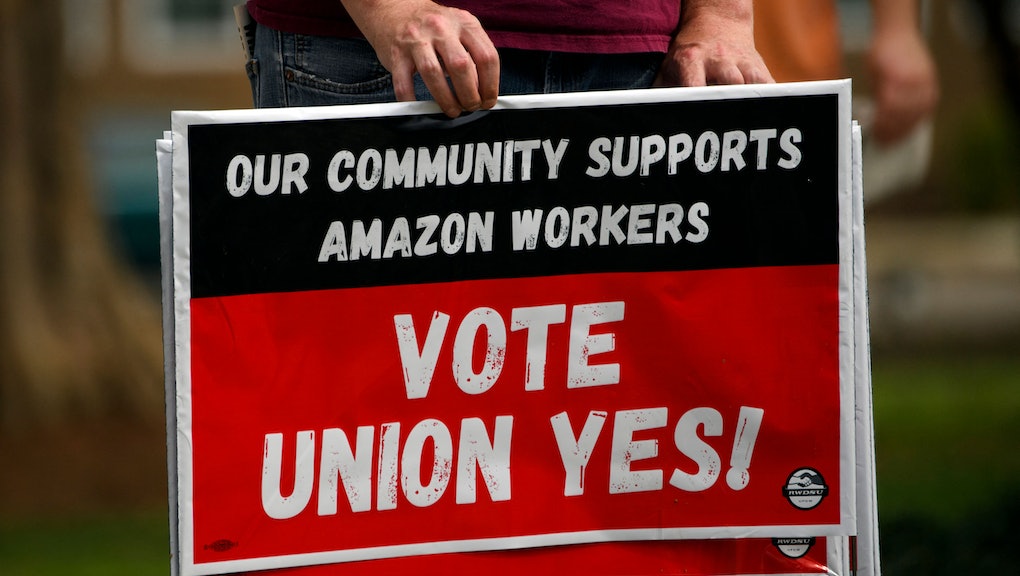 A historic effort by Amazon warehouse workers to unionize the workforce has fallen short. According to the National Labor Relations Board (NLRB), a majority of workers participating in the vote in Bessemer, Alabama, cast their ballots against unionizing — a vote which comes at a time when Amazon's treatment of its warehouse and fulfillment center workers has come under increased scrutiny. The Retail Wholesale and Department Store Union (RWDSU), which helped organize the union drive, says it will file objections regarding Amazon's conduct during the run-up to the election, calling the company's behavior "blatantly illegal."

The NLRB tallied votes Thursday night and Friday morning and reported that 1,798 of the 5,800 employees at the warehouse voted against unionizing, while 738 voted in favor. While there were 505 contested ballots, the gap was large enough that it would not have changed the outcome of the election, which required a simple majority of workers to vote yes on unionizing in order to move forward. The vote has been formalized, and the Bessemer warehouse will continue operating without union representation.

While the vote may be finalized, the fight is far from finished. The RWDSU announced Friday that it will request the NLRB hold a hearing to consider setting aside the results of the vote because of Amazon's conduct during the election. "The employer created an atmosphere of confusion, coercion, and/or fear of reprisals and thus interfered with the employees' freedom of choice,” the organization said in a statement.

Whether Amazon's conduct is illegal, as RWDSU claims, will be up to the NLRB to decide. But if it looks like a duck and quacks like a duck, then it probably is a duck — or, in this case, an illegal effort to squash unionization within the workforce.

Following the filing of an election petition to vote on unionizing the warehouse, Amazon reportedly hired "union-avoidance consultants" that it paid as much as $10,000 a day to muddy the waters and discourage unionizing. The company also flooded its workers with anti-union messaging. Employees at the Bessemer location reported receiving mailers encouraging them to vote against the union, being exposed to anti-union fliers in bathroom stalls, and even being spammed with text messages that encouraged the workers to go without union representation. Amazon also reportedly held "captive audience" meetings where workers were lectured on the downsides of forming a union and had supervisors encourage their workforce to vote against the effort. The company additionally reportedly pressured the U.S. Postal Service to install a postbox on the warehouse premises to collect ballots, a move that was viewed by RWDSU as an intimidation tactic that allowed the company to monitor ballots.

While Amazon appears to have thwarted the Bessemer warehouse's unionization effort for now, it'll likely face more campaigns across the country as employees seek improved working conditions. The company has come under fire for its treatment of workers, including failing to provide adequate protection during the coronavirus pandemic.

Amid all this, warehouse workers across the country have participated in walkouts to demand better conditions. Of course, if Amazon spent nearly as much time and effort meeting those requests as it spends trying to squash unions, it might not be in this situation to begin with.

More like this
There are QAnon NFTs now, because one grift deserves another
By AJ Dellinger
100 years after the country's largest labor war, its dark legacy still looms
By Kim Kelly
Scientists are potty-training cows in an effort to save the planet
By AJ Dellinger
Stay up to date