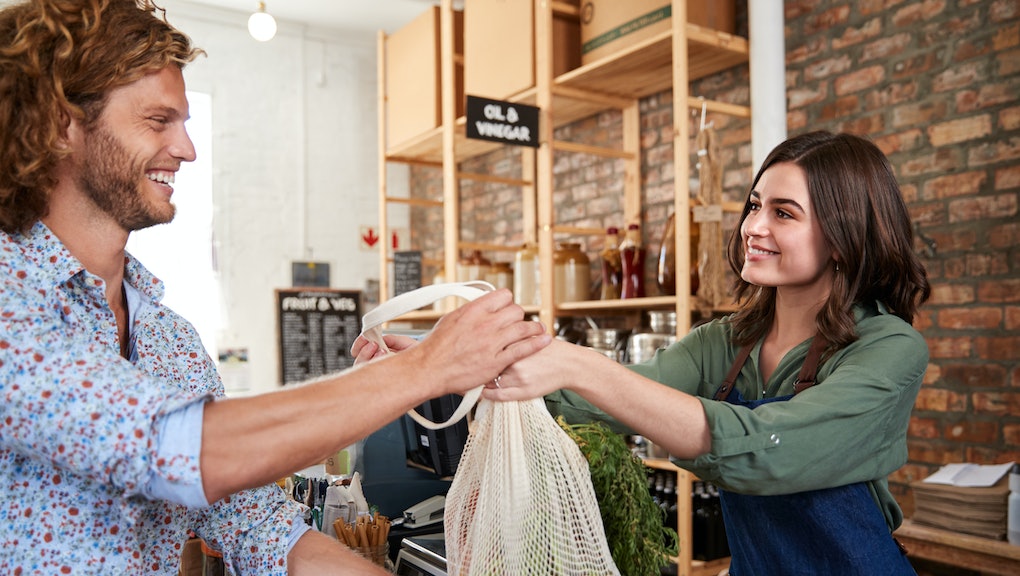 Have you ever fantasized of having the ability to wave your hand and magically have whatever you want appear right in front of you? Well, Amazon is working on making that a reality, though it's certainly not the way you dreamed of. According to a report from the New York Post, Amazon is testing a hand recognition payment method that will allow people to check out at Whole Foods and other Amazon-operated stores simply by showing their hand at checkout.

According to the report, the system will work by setting up high-tech scanners and sensors that will be located at checkout. Users will place their hand over the scanner, where Amazon will deploy computer vision technology to identify details about the hand, including its size, shape, and depth. While the payment is being tested entirely within Amazon's own offices at this point, the project — assigned the code-name Orville — could be rolled out to the public in the coming months, at which point it would be made available to Amazon Prime members. Of course, in order to make this payment method available, those customers will have to go to an Amazon-operated location and have their hand data recorded and linked to their Amazon account before they can start paying by hand. Once that process is done, Amazon will charge the card connected to the associated Amazon Prime account whenever it detects the user's hand at check out. Amazon has not publicly commented on the reported payment system.

The idea of biometric identity checks certainly is not a new one. Your phone likely has one built-in, whether it's identifying you via your fingerprint or by your facial identifiers. Likewise, this concept of using your hand at checkout may sound like a concept from a sci-fi movie but it's been kicked around in reality before. A company called Biyo has been touting a hand-based payment method since 2011, though it's not clear just how many stores actually adopted the technology. The company's social media profiles have been essentially inactive since 2015, and odds are you've never run into the scanner in the wild. The Biyo system utilized a vein scanning technology, which used infrared light to identify the patterns of veins found in your palm as a method of identifying people. There is some merit to that technology. A researcher at Lund University in Sweden highlighted vein scanning as a potential biometric identifier that could be used for making payments in a paper published in 2014. The technology appeared in just over a dozen stores and had more than 1,600 active users at one point, according to Lund University, but didn't see wide adoption. There have also been a number of instances of people installing microchips in their palm in order to tap to pay with their hand, but those methods don't specifically require information about a person's body — it's entirely about the chip, which just happens to be lodged under a person's skin.

So will people actually want to pay with their hand if given the option? CreditCards.com industry analyst Ted Rossman told Mic that while many consumers still experience pain points at check out, finding the process to be too slow at times, Amazon "may be going too far with this one." Rossman noted that about 40 percent of people say that the wait time associated with credit card chip readers is frustrating and a significant number of people opt to pay with cash or debit when making small purchases just to avoid those wait times. "I even think the Amazon Go concept is pretty cool," he says of potential alternatives to standard payment methods, including Amazon's own sensor-laden Amazon Go stores that require no checkout whatsoever. But on Amazon's Orville project, Rossman says, "I think this hand reader is too far. It's more invasive and I see less of a benefit."

While Amazon represents the first possibility of a widespread option for hand scanning, people who have the idea posed to them are not particularly receptive. A 2017 survey conducted by Visa found that while many consumers are open to embracing biometric payments, they are more comfortable with the options they have already interacted with like fingerprints or eyes scans. Just 18 percent of people expressed any sort of interest in having the veins in their hands scanned as a way to identify them — nearly even with the 14 percent of people who said they have zero interest in any sort of biometric payment solution regardless of what part of their body is being used to identify them.

On top of consumer skepticism toward hand scanning, there's also the fact that existing methods like vein authentication have already been cracked, so to speak. Hackers have already developed fake hands that can be used to trick vein scanners, putting a potential dent in the security of the biometric check. To be clear, these types of hacks require a considerable amount of time and effort to execute and likely wouldn't be worth the time of your average hacker, but the fact is the technology has been undermined. Amazon isn't relying on vein scans and its system may prove to be tougher to defeat, but these types of things erode trust in a system, rightfully or not.

In order to get people to get on board with a hand scan, Amazon will likely need to sell people on the convenience of the service — which seems like a bit of an uphill battle given that other, straightforward solutions are available. As Rossman points out, there are already alternatives out there that don't require surrendering your hand impression but can speed up the transaction process. "What I think is a good alternative though is something like Apple Pay, Google Pay, Samsung Pay. Those mobile payment services are super fast, they're even more secure than chip cards," he says. "Contactless cards...are just starting to catch on here. These are some things anyone frustrated with the payment experience should try before we go down this other path."