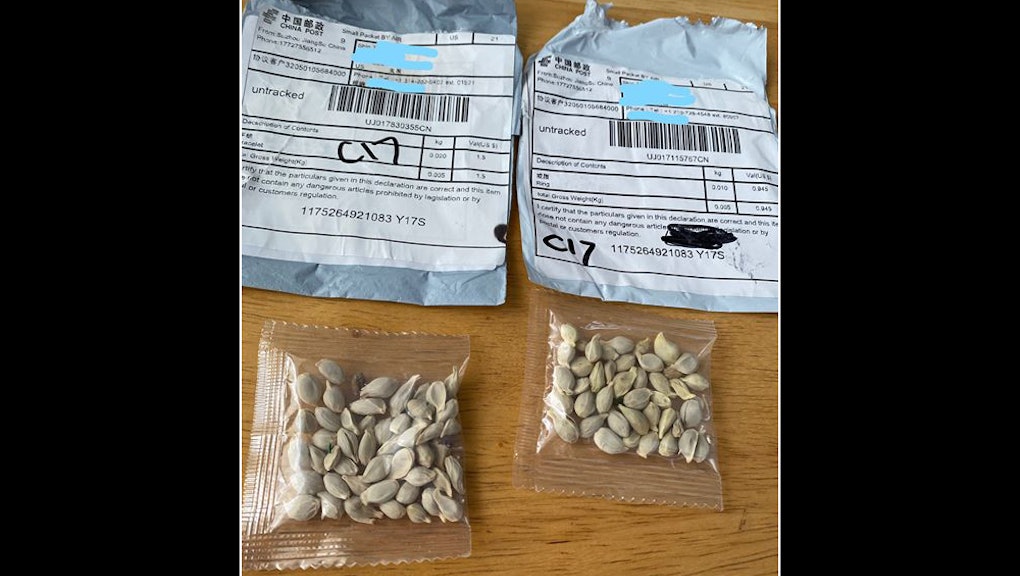 People across the country are receiving packages they did not order containing bags of mysterious seeds. Officials from multiple states are asking folks to let their local agricultural departments know if they've received one of the packages, and for those who have, officials are begging them to please, whatever you do, do NOT plant them. According to the labels, the packages come from China or Uzbekistan and falsely claim to contain lightweight items like earbuds or jewelry.

The motive behind the unsolicited deliveries is still unknown, and an investigation into the situation is ongoing by the U.S. Department of Agriculture (USDA) and the Department of Homeland Security (DHS).

"If they are invasive or contain plant pests or disease, from an agricultural point of view, that is our greatest concern," Dr. Mike Strain, Commissioner of the Louisiana Department of Agriculture and Forestry, told the Wall Street Journal.

Invasive plant species are a huge danger to local habitats, which is why legitimately importing seeds requires going through a tough U.S. Customs process that evaluates whether they come from a federally approved source. Unfortunately, as the Wall Street Journal notes, some people have told officials they've already planted the seeds they got from their surprise gifts.

It's no wonder, then, that some states' press releases have placed so much emphasis on not planting the seeds.

"Do not plant these seeds," warned the Virginia Department of Agriculture. "Invasive species wreak havoc on the environment, displace or destroy native plants and insects and severely damage crops."

Washington State's Department of Agriculture was more firm on their Facebook post. "DO NOT plant them," they wrote, with the emphasis of an exasperated mom.

The USDA has already released an update to their investigation into the seeds, stating that these packages appear to be part of an online "brushing scam" that has been hitting more homes in the U.S. lately. These scams are a way for online stores or third-party Amazon sellers to boost their ratings by creating accounts to purchase items from themselves, shipping it to a random address in the U.S., and then leaving a glowing review as a verified buyer. The recipient gets free (albeit unwanted) products, and the seller gets fake 5-star reviews to attract more buyers.

Although this sort of scam initially seems harmless for the person receiving the packages, officials say the recent shipment of seeds is particularly troubling due to the environmental risk. They've asked that people turn in the seeds to their local agricultural department for proper disposal, lest they end up growing in a landfill somewhere.