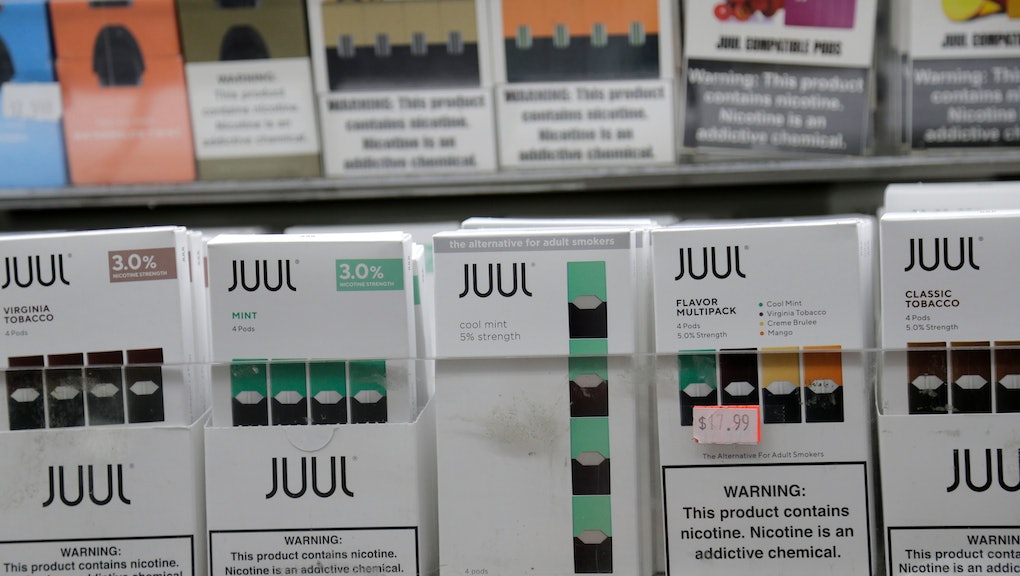 Amid vaping crisis, Juul CEO steps down in favor of Altria replacement

This week, Juul Labs CEO Kevin Burns stepped down amidst growing controversy surrounding the company. He will be replaced by K.C. Crosthwaite, an executive from Altria — the largest cigarette manufacturer in the world. The move comes as Juul has found itself under fire recently — in part for questionable advertising practices and in part because of a national health crisis centered around vaping. But the shake-up has nothing to do with that. It can't. If it did, Juul would have ditched Burns as its CEO long ago, because just about everything the company has come under fire for in recent weeks are things that have been known for years.

Burns took a leadership position at Juul in 2017, shortly after the company was spun off from vape maker PAX Labs. Juul quickly raised $150 million in investments. Less than a year later, it secured a $12 billion investment from Altria, the owner of the notorious cigarette and tobacco firm Phillip Morris. While that money was flowing in, Juul was taking on a considerable amount of heat. In the summer of 2018, the U.S. Food and Drug Administration began an investigation into the company's advertising practices, claiming that it intentionally targeted children in an effort to make "customers for life" out of a younger population that had almost entirely stopped taking up smoking.

Burns responded by shutting down Juul's social media accounts, likely knowing full well that the damage had already been done. By the time Juul accounts disappeared from Instagram, Facebook and Twitter, vaping use among teens skyrocketed to record numbers, with nearly two in five 12th graders reporting trying an e-cigarette at least once. A 2018 advisory from Surgeon General Jerome Adams called teen vaping "an epidemic" and noted that use of the products among high schoolers climbed by more than 900 percent between 2011 and 2015, and another 78 percent between 2017 and 2018. The company also knew full well that eliminating its own accounts wouldn't wipe out its social media presence, since fan posts made up 99 percent of all company mentions online. Of course, not all vapes are Juuls, but the company dominates the market, accounting for 40 percent of the e-cigarette market in 2017, so it is hard to downplay the company's role in the growing use among young people.

Earlier this year, Juul was accused of illegally misleading consumers into believing its products were safer than cigarettes — a claim that Burns essentially admitted there wasn't actually proof to back. In an interview with CNBC, the then-CEO of Juul said, "We have not done the long-term, longitudinal clinical testing that we need to do" to ensure vaping is a safe alternative. Despite this, he allowed his company to run a campaign encouraging people to "make the switch" from cigarettes to vapes with the allegedly implicit promise that doing so would help them quit or would be safer than smoking cigarettes.

Then there is the ongoing public health crisis that has resulted in more than 530 confirmed or probable cases of lung injuries with links to vaping. The Centers for Disease Control and Prevention have identified cases in 37 states so far, and the numbers continue to expand every single week. It's impossible to view the epidemic without considering Juul. Most victims of the current spate of lung disease are young men — a demographic that has been central to Juul's massive growth over the last few years. While the company's products have not been explicitly linked to any of the ongoing health concerns, the company has been a major part of popularizing vaping products. Juul and its marketing team helped to get teens hooked on vaping, and when it attempted to crack down on selling its e-liquids and other products to those young users, they turned to black markets and unregulated products.

Those would all be good reasons to oust an executive. They just probably aren't the reason that Burns is stepping down, because if they were, he would have been out a long time ago, while the controversies were happening.

To the credit of Juul — and this is the faintest praise imaginable — the company didn't even pretend like it was moving on from Burns for negligence or moral failings or anything of the like. In fact, the company celebrated the CEO's reign. In a press release, the company said that Burns "helped provide an alternative to millions of adult smokers around the world and took aggressive actions to combat youth usage," while bragging that he helped to implement "industry-leading manufacturing and quality control standards." The company positioned the move to Crosthwaite as simply a change in leadership, a move to someone with more experience in running a massive enterprise and dealing with regulatory challenges. There is no admission of wrongdoing or missteps along the way even though, given the myriad of controversy currently surrounding the company, it's hard not to process the decision that way.

But the fact is, Burns did exactly what he was supposed to during his time at the head of Juul. He grew the company, and helped to turn Juul into a massive, international corporation that is introducing smoking to young people all over the world. Juul helped to undo the massive strides made by the U.S. government to improve the health of the public and of young people. Now, more kids are likely to vape than ever before — and those kids are more likely to try traditional cigarettes. It makes sense that Altria, a company that made its fortune selling tobacco and nicotine to the masses, would see billions of dollars of potential in the company — and now have their own man in control of the operation.

Juul doesn't have to operate this way. There are legitimate purposes to vapes and e-cigarettes, and there is some evidence to suggest that the products can help some smokers wean themselves off of their nicotine addiction. But without young users — a massive demographic that was largely untouched by the tobacco industry — Juul wouldn't be valued at $38 billion. It wouldn't attract the attention of investors and tobacco makers. It wouldn't have the same potential for growth, because its user base would primarily be people who are trying to quit, not just getting started.

Juul can shut down its advertising, as it announced that it would today. It can stop lobbying for favorable laws and regulations. It can pull flavored juices that appeal to kids and choose not to object to bans implemented by states and the federal government. The company can do all that because it already did its damage. It already hooked a new generation. And the CEO responsible is stepping away not in shame, but with praise. That probably tells you everything you need to know about what Juul really thinks about public health.