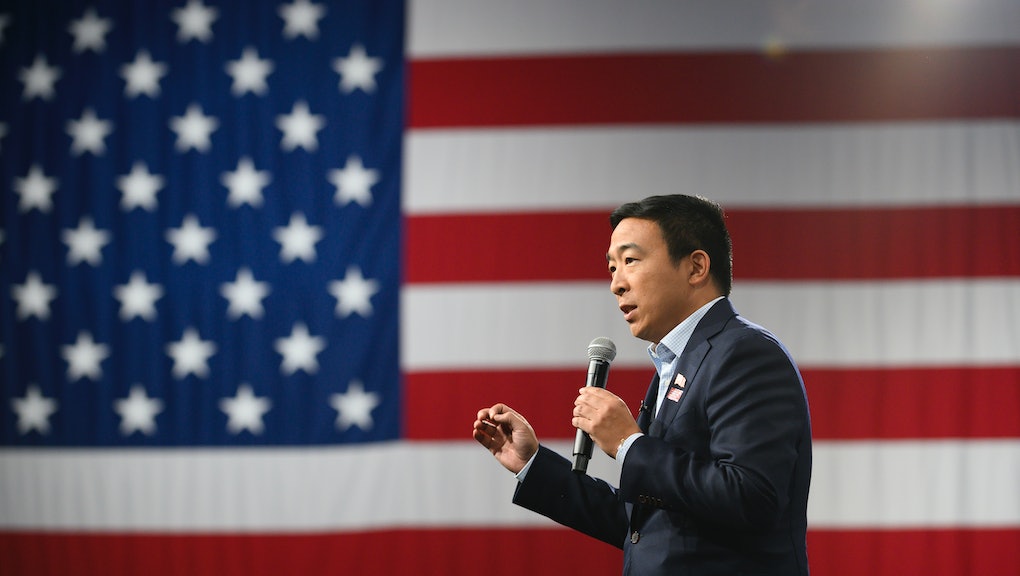 Andrew Yang's 2020 campaign, by the numbers

He's steadily become a household name since the Democratic presidential primaries started, and the statistics about Andrew Yang's 2020 campaign show it. Although he's still behind many of the well-known candidates in polling and fundraising, Yang has soared in the race compared to how he was doing just months ago, when it seemed like much of the United States wasn't taking his candidacy seriously.

Yang has been recently in the news criticizing MSNBC for leaving him out of some coverage of the Democratic primary, despite the fact that he's currently polling sixth out of the 18 Democrats who are still in the race. According to Politico's sources, the network apologized and invited him to come on shows for interviews, but Yang claimed the apology didn't happen. MSNBC also once misnamed him as "John Yang," and while the network did apologize for that, Yang said in a tweet that along with omitting him from promotional graphics and giving him less speaking time in debates, "at some point you have to call it."

There's a lot to know when it comes to the numbers of Yang's campaign — beyond that $1,000 he wants to give every American each month as part of his universal basic income plan. Here's a look at how his candidacy stacks up.

According to OpenSecrets, which uses data from the Federal Election Commission (FEC), Yang has raised $15,020,173. The majority of that money — nearly $10 million — has come in just during the third quarter of 2019, and is mostly from small contributions of less than $200. Sanders has also touted the strength of his small dollar donors.

The Vermont senator's coffers are the fullest in the race, at $73 million. Next is Warren's $60 million, followed by Buttigieg's $51 million, Biden's $37 million, Harris's $36 million, New Jersey Sen. Cory Booker's $18 million, and Klobuchar's $17 million.

Because President Trump declared his 2020 re-election bid years ago, he has about $165 million on hand.

As of late November, Yang has been in all five of the Democratic primary debates. Many of the top candidates, including Warren, Sanders, Biden, Harris, Booker, Buttigieg, and Klobuchar have been in all of the debates. Those who are still in the primary race but have not qualified for all of the debates are former Housing and Urban Development Secretary Julián Castro and Hawaii Rep. Tulsi Gabbard. Former Texas Rep. Beto O'Rourke was in every debate until he dropped out of the race at the beginning of November.

Yang spoke for 6 minutes and 48 seconds at the Democratic primary debate on Nov. 20. This was the least of any candidates on the stage. According to Politico, Yang wasn't asked a direct question until 32 minutes into the debate.

A New York Times analysis revealed that billionaire Tom Steyer, who has only been invited to two most recent debates, spoke for 8 minutes and 24 seconds, while Biden, Buttigieg, and Warren all spoke for more than 12 minutes each. Sanders, Booker, and Harris spoke for over 11 minutes each.

Time in the presidential race: 107 weeks

Yang filed to run for president with the FEC on Nov. 6, 2017. That's approximately two years and three weeks ago. He was one of the earliest candidates to announce, only after former Maryland Rep. John Delaney, who announced on June 28, 2017.

Most candidates waited much later. Warren announced on New Year's Eve in 2018, and many people declared this January. Sanders said he'd run in February, and Biden didn't join until late April.

Forbes estimates that Yang, who worked in various startups and founded the nonprofit Venture For America, has a net worth of about $1 million. This puts him about on par with Booker, whose net worth is around $1.5 million. Other candidates have a fair amount more. Warren is worth $12 million, Biden is worth $9 million, and Sanders is worth $2.5 million, according to Forbes.

This article was originally published on November 29, 2019