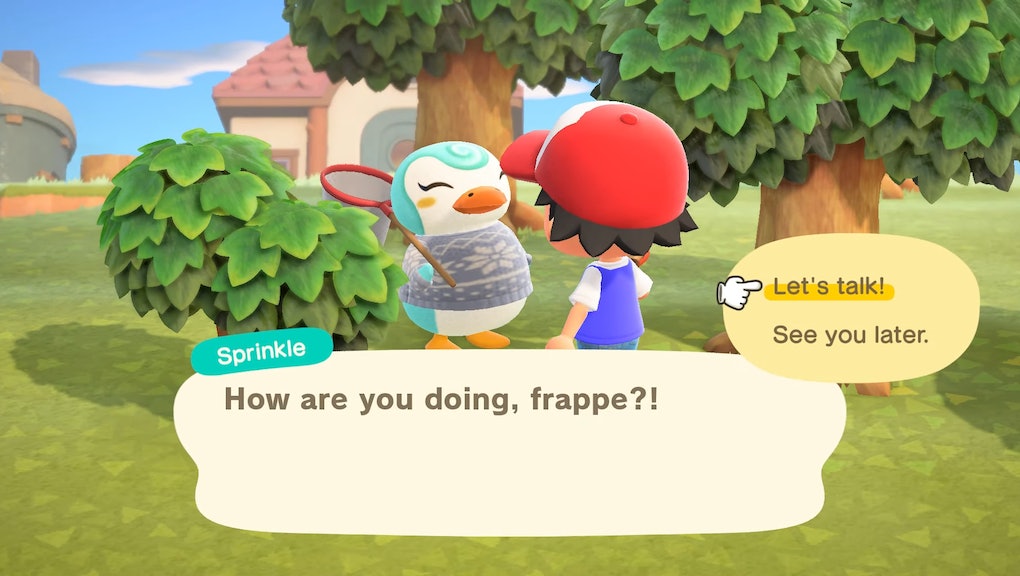 'Animal Crossing: New Horizons': How to interact with villagers

Animal Crossing: New Horizons has a seemingly endless amount of things to do. There are enough tasks to complete and goals to achieve to keep you busy for weeks, if not years. But while you've had your head down tidying your home, running a small business, and collecting bells for Tom Nook, have you bothered to chat with your cute little animal neighbors? Just like in real life, it's easy to become distracted by the rat race, but it's important to make time to get to know your neighbors.

The characters in Animal Crossing are also part of what make your island a unique paradise. They're another aspect of the game you can customize, just like everything else, though it can take quite some effort.

There are currently about 400 villagers available for you to recruit, with more expected to come in future updates. Each character has a personality type that falls into one of eight categories and shapes how they interact with others, what they wear, and how they talk.

Thankfully, it's pretty easy to tell what kind of personality a villager has based on their distinct characteristics.

The game will help players get three new villagers, as an addition to the two you started with, once you've progressed to the point where you can build a bridge. Around then, Tom Nook will ask you for a favor: He'll request that you pick out three plots of land to put housing kits on. These three plots require a bunch of crafting ingredients so folks can start moving in. Peek at Mic's sister site, Inverse, for a detailed guide on how to get all the materials you need to make three homes in New Horizons.

Once you've made the three houses, the process of attracting villagers to your island is way easier — as long as you have the cash. After upgrading Residential Services, you can pay 10,000 bells to pick a plot of land where a new resident can stay. Use Nook Miles to buy a Nook Miles Ticket that can take you to random islands (which usually have random villagers). Talk to anyone you find twice to invite them to check out your sweet island. If you've got plots of land available for them to buy, they might pick one and move in.

Another way to get new residents is through the campsite. If there's a random villager visiting the campground, you can talk to them to convince them to build a house on the island. You can also use real life money to buy Amiibo cards that will bring specific villagers to the camp for you to invite.

New Horizons allows up to 10 villagers to join your island. Note that this doesn't count other player characters you're sharing the game with, limited to eight, meaning you could potentially have up to 18 residents on your island in total.

What if you didn't like the villagers you started with? Or maybe one of the villagers you invited ended up being really annoying or unpleasant to be around. Don't worry, there's a way to 'convince' them to leave.

First, channel your inner teenage 'mean girl' and start shunning the villager. Outcast them. Ignore them. Pretend they don't exist. Don't give them a single speck of attention — not even to hit them with a bug net. According to IGN, even repeatedly whacking a villager still counts as a form of attention, which can make the removal process slower.

To speed things up, some players have gone as far as to build a fence around the unwanted villager so they can completely avoid all contact.

The neglected villager will eventually start to feel lonely and unwanted on the island. When you finally see this villager with a thought bubble above their head, talk to them. There's a chance they're thinking about leaving the island, which is when you can 'encourage' them to move out.

Sometimes a villager you like will have a thought bubble over their heads. If you talk to them and they mention moving, just encourage them to stay with you so they won't leave. They'll carry on as if they never had the idea in the first place.

The 'good vibes only' club

The method of recruiting characters is the same no matter the personality type, so picking a villager you want on the island is really a matter of personal choice. Once you've got your crew assembled, you can increase your friendship with each other by greeting them every day, chatting with them, writing them letters, running errands for them, and offering small gifts. Celebrating their birthday with a gift is another surefire way to become fast friends.

Getting along with your neighbors comes with its own perks as well. They're more likely to give you rare items, reactions, and DIY recipes as gifts in return. You'll know when you've reached peak BFF status with a resident when they give you a portrait of themselves to hang on the wall of your home. Just what you always wanted, right?

This article was originally published on May 7, 2020