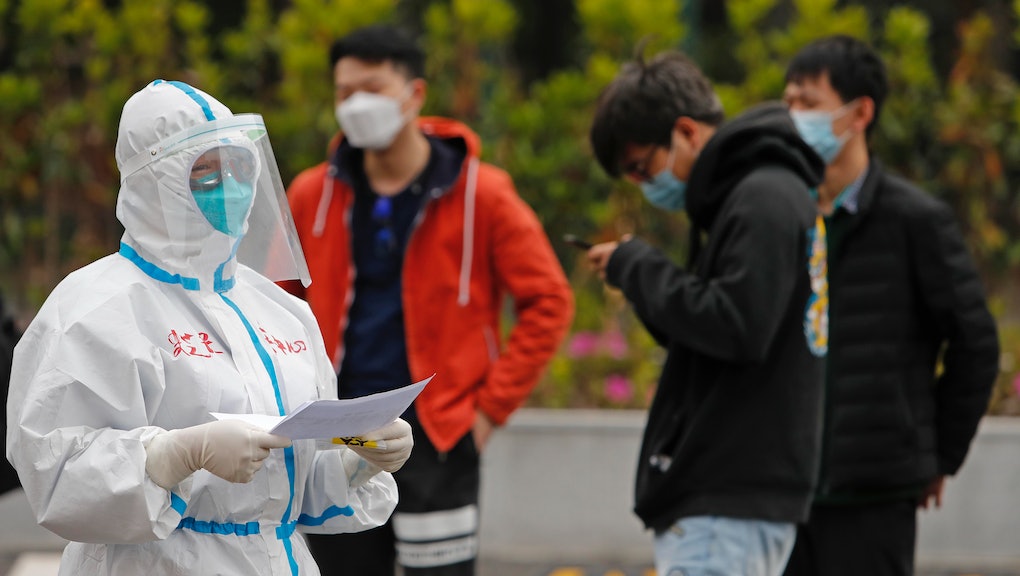 Africans living in China are reportedly being evicted from their homes, subjected to compulsory coronavirus testing, and forced to quarantine — not because they tested positive for coronavirus, but apparently only because of the color of their skin. Amid claims of police targeting and being denied service at restaurants, the anti-African sentiment is forcing people out of their homes and onto the streets. One student from Uganda said, "I’ve been sleeping under the bridge for four days with no food to eat … I cannot buy food anywhere. No shops or restaurants will serve me."

The treatment has drawn international attention as the Chinese government is now lifting its mandatory coronavirus lockdown. The ease-up doesn't appear to apply to Africans living in China, who report that they're facing abuse and harassment. According to the Los Angeles Times, in April, local government officials started to test and track cases of coronavirus originating outside the country, and Africans quickly became the scapegoat for these cases. Xenophobic rumors about those living in the city of Guangzhou began to spread on Weibo, a social media platform, and the racism snowballed from there.

The Chinese government appears to be dragging its feet on protecting African immigrants and nationals living in China. African governments are in turn demanding answers from local and national Chinese officials, saying that the harassment and discriminatory treatment is rooted in racism and serves no public health purpose. Many African ambassadors have sent letters on behalf of their constituents, demanding that the "inhumane" treatment stops.

Kenyan officials who wrote to the Chinese government were told by the Chinese Embassy in Nairobi that "the government of China takes a serious view of the situation, and that the local authorities in Guangzhou have been tasked to take immediate action to safeguard the legitimate rights of Africans."

It's not just state government officials who want answers; a hashtag emerged on Twitter demanding that #ChinaMustExplain. The African Diaspora Congress, a coalition that advocates for Africans living around the world, started a petition directed to Chinese President Xi Jinping that declares that the "abuse of Black people by the Chinese citizens will no longer be tolerated."

A spokesperson for the Chinese Foreign Ministry has stated that the government rejects "differential treatment, and we have zero tolerance for discrimination. Since the outbreak, the authorities in Guangdong [Province] attach high importance to the treatment of foreign patients, including African nationals." The Chinese embassy in Zimbabwe has called the claims of mistreatment sensationalistic.

The treatment has been worst in Guangzhou, the most populous city in Guangdong Province, where the greatest number of African nationals reside. Over the weekend, a tweet went viral that depicted a sign at a local McDonald's barring "black people" from the restaurant. It reads: "For the sake of your health consciously notify the local police for medical isolation." The company has since apologized for the sign.

"We've seen a number of reports from social media from members of the African community in Guangzhou making complaints of mistreatment, arrests, eviction, and being denied access to restaurants and hotels, and some students are even claiming to be living on the streets and being denied food," an Al Jazeera reporter based in Hong Kong said.

The treatment toward Africans in China is not new. African people, because of racist and xenophobic belief about those with dark skin, are sometimes treated as inherent carriers of the novel coronavirus. Even in 2017, a government official sought to sow fear and hatred of African people in Guangdong, and Chinese media is known to parrot these racist beliefs. Even the heavily censored media doesn't take down social media posts laden with bigotry.

For decades, though, Africa and China have been building up their partnership. China is responsible for a number of infrastructure projects in Africa and participates in more trade with the region than any other country. China's economic influence spans the continent: It owns most of Nigeria's debt and more than half of Ethiopia's foreign investment comes from China.

"The impacts on relationships between China and African countries are a bit ambiguous because on one hand, China is a major donor to Africa and provides a wide array of medical and technical expertise," Samuel Myers Jr., a professor of economics and social policy at the University of Minnesota, tells Mic. "On the other hand, the continuing interpersonal conflicts between African students studying in China and local Chinese populations will likely have long term impacts on African perceptions about the benefits of Chinese generosity."

The China Africa Project, an independent media organization, says that the treatment of Africans in the wake of the coronavirus outbreak jeopardizes the relationship between the two regions. "Without an apology or some other expression of regret from Chinese officials, African presidents and prime ministers will find it very difficult to simply move on to other issues like debt relief and cooperation with China on COVID-19 prevention."

If the baseline expectation that other humans should be treated with respect and dignity isn't enough — a problem in itself — then it remains to be seen whether possible economic consequences could persuade Chinese officials to act to protect Africans in the country. For a notoriously proud country experiencing economic shrinkage for the first time in decades, it's a possibility.

More like this
"Our society is really totally nuts": Newly revealed emails show how Fauci really felt during the pandemic
By Rafi Schwartz
West Virginia is offering guns to incentivize people to get vaccinated
By Rafi Schwartz
A Hot Vax Summer is impossible when my family in India is still struggling
By Angel Kumari
Stay up to date