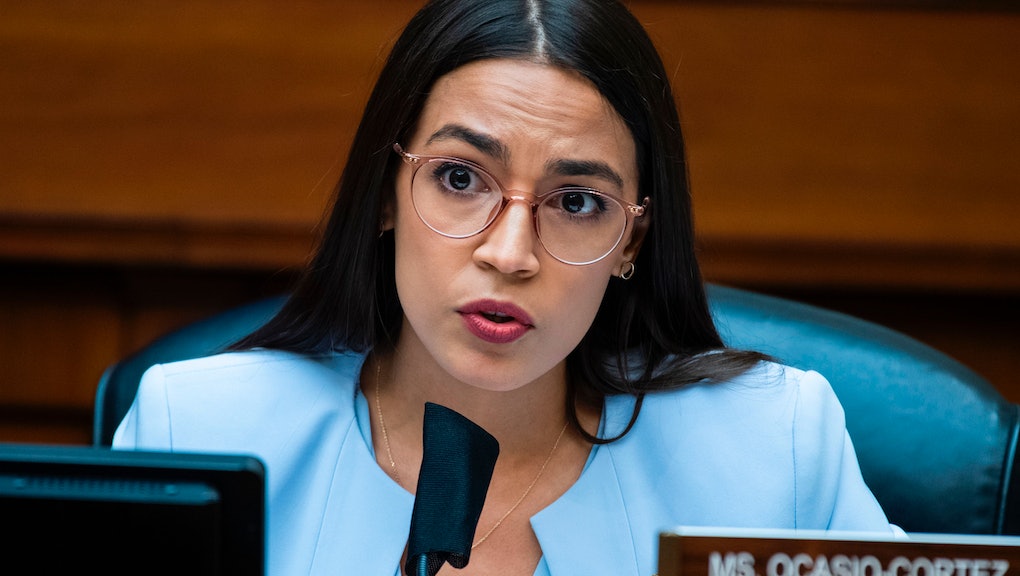 AOC introduced another climate emergency bill because “we are out of time and excuses.”

Two years ago, when Rep. Alexandria Ocasio-Cortez (D-N.Y.) introduced the landmark Green New Deal legislation, many members of Congress had yet to acknowledge that climate change is indeed an existential threat. Washington looks a bit different now, with Democrats enjoying leadership in the White House, House of Representatives, and Senate — a shift that means they might actually be able to pass legislation that never would have been possible during the Donald Trump/Mitch McConnell leadership years.

Ocasio-Cortez doesn't want to squander that chance. On Thursday, the AOC, along with Rep. Earl Blumenauer (D-Ore.) and Sen. Bernie Sanders (I-Vt.), introduced legislation that would require President Biden to declare a climate emergency under the National Emergencies Act. If passed, the National Climate Emergency Act, would allow Biden to use presidential powers to address the many impacts of climate change.

If you're experiencing déjá vu, it's probably because Ocasio-Cortez and Sanders introduced similar legislation in 2019, but that one didn't even make it to a House vote, despite the Democratic control. Now, though, there is real political momentum to act on climate change — not just from grassroots organizations (which have pushed the federal government to move on the issue for decades), but also from politicos who were previously reluctant to heed calls for climate action.

In a promising sign for the bill, Senate Majority Leader Chuck Schumer (D-N.Y.) recently told MSNBC's Rachel Maddow that "if there ever was an emergency, climate is one ... After all, it's a crisis." Plus, it certainly helps that, as Data for Progress reported last year, climate change is a winnable issue for Democrats.

"We've made a lot of progress since we introduced this resolution two years ago, but now we have to meet the moment," Ocasio-Cortez said in a statement released by Blumenauer. "We are out of time and excuses. Our country is in crisis and, to address it, we will have to mobilize our social and economic resources on a massive scale."

Declaring a climate emergency would allow the government to substantively address the impacts of climate change, redirecting resources to (among other things) modernize infrastructure to curb pollution, restore public lands, and invest in a clean energy economy that would offer relief to communities most impacted by the climate crisis. People who experience systemic disenfranchisement and disinvestment, particularly communities of color and poor communities, "are often the first exposed to the impacts of climate change," the legislation reads. These communities then experience "outsized risk because of the close proximity of the community to environmental hazards and stressors...and have the fewest resources to mitigate those impacts or to relocate, which will exacerbate preexisting challenges."

Whether the legislation is brought for a vote is largely dependent on the Democratic party's legislative priorities for the first year of the Biden administration, but environmental groups and activists are hopeful. In a statement accompanying Blumenauer's announcement, Sunrise Movement Executive Director Varshini Prakesh said, "This bill is a good sign that our leaders are finally understanding what young people and climate activists have been shouting from the rooftops for years — that the fires that burned our homes to rubble, the floods that took our family and friends with them, are a climate emergency, and bold action must be done."

More like this
Biden's pledges aren't enough to avoid the worst effects of climate change, new study says
By AJ Dellinger
Marjorie Taylor Greene and her team are just openly accosting people in Congress now
By Rafi Schwartz
Buckle up: The investigation into the Jan. 6 insurrection is just getting started
By Rafi Schwartz
Stay up to date