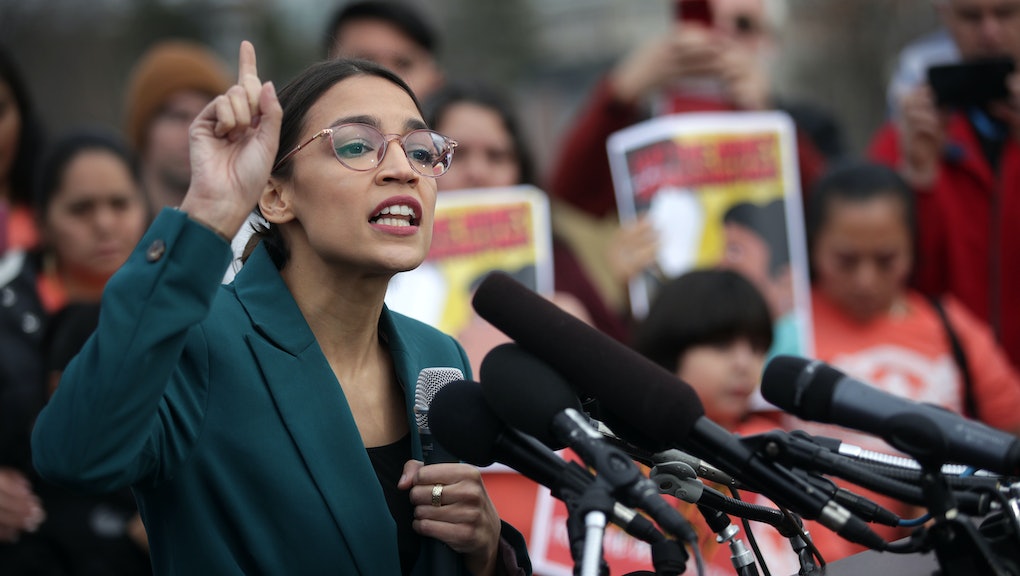 Here’s a word salad that’d never make sense outside of 2021: AOC did a Twitch stream about GameStop stonks on Thursday night. The beginning of the livestream was plagued with technical issues ("This is an ASMR channel now," the Congresswoman joked, filling airtime) but that didn’t stop 300,000 people from tuning in to hear her thoughts on Reddit’s proletariat coup on Wall Street.

Rep. Alexandria Ocasio-Cortez (D-NY) is not just a fiercely progressive politician, she’s also an avid gamer. Back in October, she played Among Us with her colleague Rep. Ilhan Omar (D-MN) and several prominent Twitch influencers on a livestream that drew around 400,000 viewers — the third-highest ever on the platform.

One of the youngest and hippest members of Congress, Ocasio-Cortez often takes to social media to talk about current events with her constituents and followers. She harshly rebuked Republicans during a raw and furious Instagram Live on January 12, in the wake of the Capitol riots. Before taking questions, AOC told viewers she "thought [she] was going to die" when a MAGA mob stormed the halls of government.

But back to AOC’s take on the GameStop stock drama: unsurprisingly, she’s pretty excited about Reddit’s collective economic power. “People were really feeling like everyday people were finally able to collectively organize and get back at the folks who have historically had all the marbles on Wall Street and force one hedge fund into an existential crisis,” she said on Twitch.

The Congresswoman also chatted with Reddit co-founder Alexis Ohanian, who countered Wall Street’s whining about market manipulation with the argument that the GameStop short squeeze leveled the playing field for regular people. The vulnerabilities in the GameStop short scheme were uncovered by a random YouTuber; all he did was encourage others to vote with their dollars. “Hedge funds do this all the time,” Ohanian told AOC. “Literally the same thing that these funds do behind closed doors in cigar-filled rooms, they did out in public.”

AOC concurred, and offered some context about trading tools like Robinhood: “Everyday people were starting to be able to identify and exploit vulnerabilities in the system that has traditionally been cordoned off,” she noted.

Earlier in the day Thursday, Robinhood announced it was restricting trading of GameStop and other popular “meme stocks” like AMC Entertainment, Blackberry, Tootsie Roll, and others. The move drew swift condemnation from politicians on both sides of the aisle, including AOC. "This is unacceptable," she tweeted. "We now need to know more about @RobinhoodApp's decision to block retail investors from purchasing stock while hedge funds are freely able to trade the stock as they see fit."

In the ultimate male-colleague-piggybacking-off-what-she-said move, Republican Senator Ted Cruz retweeted AOC, commenting “fully agree.” Ocasio-Cortez had no time for that malarkey, however: "I am happy to work with Republicans on this issue where there's common ground, but you almost had me murdered 3 weeks ago so you can sit this one out," she wrote.

More like this
The NFT gold rush, explained by the world's first meme manager
By Kara Weisenstein
The real reasons employees aren't rushing back to work
By Noah Berlatsky
Universal basic income: Why doesn't the United States have it yet?
By Rafi Schwartz
Stay up to date