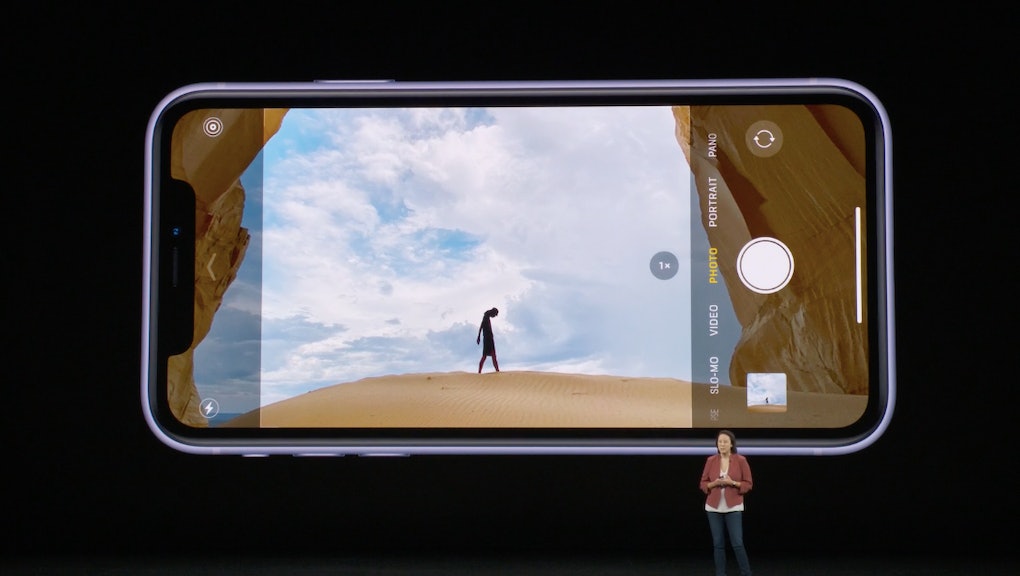 Today, at the annual Apple Special Event held at Steve Jobs Theater, the company revealed an improved camera for its next line of smartphone models — the iPhone 11, iPhone 11 Pro, and the iPhone 11 Pro Max. The successors to the iPhone XR and iPhone XS and XS Max, respectively, come with a whole slew of new features, as usual. But perhaps none more important than the new iPhone 11 and 11 Pro cameras.

The iPhone 11 (starting at $699) features dual-cameras on the back that can switch between a wide camera and an ultra-wide shot. This transition between the cameras is seamless, allowing users to switch with a tap of a button without moving back or twisting yourself into positions to get those dynamic angles.

The two cameras also address a complaint Apple users had about the XR: The inability to take good photos of non-human subjects, even in Portrait Mode. Your pets, in other words. Before, Apple users needed an app when taking pics of their pets. Thanks to the two new cameras, the iPhones now have the ability to use stereoscopic depth and make Fido's pics Instagram perfect.

Apple has also improved the Night Mode in the new iPhone 11 line (maybe to be more competitive with Google Pixel's Night Sight?). The company boasts that the phone's sensors deliver "huge improvements to photos captured in indoor and outdoor low-light environments, resulting in brighter images with natural colors and reduced noise."

Also announced during the iPhone 11 rundown is a silly little camera feature that should make you channel your inner superstar — a slo-mo mode for selfies. With this feature, you can use the front-facing camera to create a slo-mo clip of your glamorous, windswept self to, presumably, post online. Apple is calling them "slofies," a portmanteau of 'selfies' and 'slo-mo' that is currently hit-or-miss with audiences on social media.

The iPhone 11 Pro (starting at $999) and iPhone 11 Pro Max (starting at $1,099) stepped out of the gate to up the ante with three cameras on the back. Each camera supports a different level of zoom that is meant to elevate a user's photos to a more "professional" level. Hence the name. (The presenter even commented, "That is so pro." Which, frankly, came off as a very 'dad, no' moment.)

The first camera is a telephoto camera that captures 40 percent more light compared to the iPhone Xs. If you zoom out one level, you'll hit the wide camera that functions similarly to the iPhone 11's camera. Zoom out one more time will get the ultra-wide camera which, like the iPhone 11, offers a 120 degree field of view. This gives the phone a 4x optical zoom range (zoom in 2x and zoom out 2x) without moving for a single spot. The three cameras can also film in 4k for videos.

With Apple finally stepping into two/three-camera territory with their flagship smartphones, they appear to be offering an incentive for the chronic smartphone photographer to take a look at their options. Interested users will be able to do just that beginning September 20.