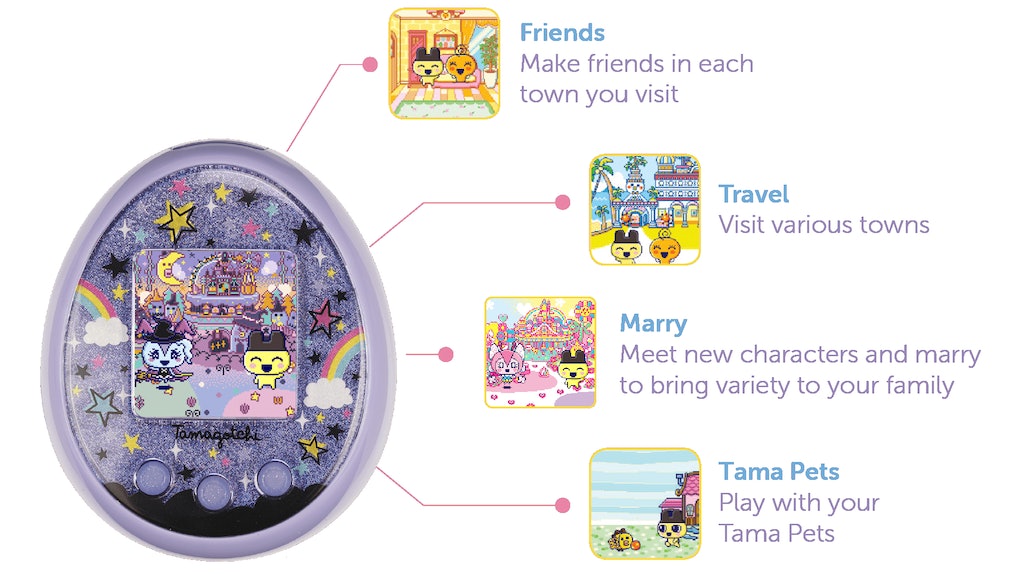 Are Tamagotchis coming back? The '90s fad is getting modern features and an updated look

The one and only Tamagotchi has returned with an updated look and familiar features that only '90s kids are sure to remember. First released in 1996, the Tamagotchi was a tiny device that allowed children to care and play for a virtual pet throughout the day with a chain for easy backpack attachment. Now, Tamagotchis are coming back with the new Tamagotchi On that targets a new generation of children with a colorful screen, new activities, and a mobile app to toy around with.

The new Tamagotchi On takes what made the first edition so addicting and expands on it with a colorful, more detailed screen that can display other characters and environments. There are also more activities for your Tamagotchi, such as traveling and shopping, and mini-games to play for in-game currency. Players and their digital pets can also hook up with other Tamagotchi to go on play dates and, eventually, get married. This can be done either in-person, with the infrared sensor on the devices, or via the Tamagotchi On app for mobile. With the new device, you can send your pet to the app for more activities, events, and opportunities to meet other pets before returning home.

The game's basic controls still reflect the original version with only three buttons on the front of the device. Additionally, in delightfully '90s fashion, the new Tamagotchi doesn't need WiFi or microtransactions to play. According to its Amazon listing, it only needs two AAA batteries to work.

Now for the big question: How much does it beep?

Anyone who used to own a Tamagotchi will probably remember the regular and frequent beeping that came from their little pets. The first generation of digital pets required near constant attention and care or else your pet would die (or return to their home planet) within the day. The distraction was so great that schools banned the Tamagotchi from classrooms to restore order and reduce disruption.

Engadget received a Tamagotchi On early to review and reported that the beeping is not as bad as it used to be. It certainly still beeps, of course, but there are alternatives for your pet so it won't become a constant distraction. One option is sending your pet to a hotel for a while. Tara Badie, the director of marketing for Bandai America, explained the usefulness of this function to Wired. “You can send them to the Tama hotel for 10 Gatchi points an hour,” she said. “I had to do that the other day when I was taking care of mine at a conference. I couldn’t have it beeping all day.”

All these new features come at a price. Gizmodo noted the device is much larger than it used to be in order to fit in the larger, modern screen, leaving it to compete "for pocket space against a smartphone." The cost of the device has also increased to a startling $60 — much higher than the previous versions that retailed for about $15 to $30. Tamagotchi On is also facing a market with more competition thanks to the availability of mobile games and apps. Whether the newest version of our alien-like digital pets will make a comeback will be seen by its release date on August 15. For anyone who can't wait, Tamagotchi On is available for pre-order on Amazon.