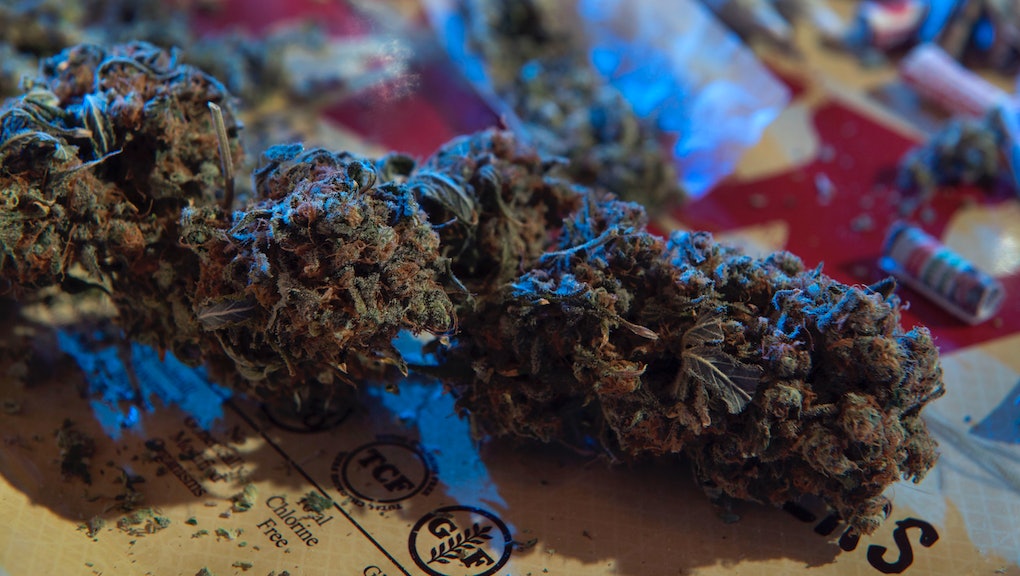 Are you smoking bad weed?

While many Americans can now buy and grow marijuana legally — choosing from an endlessly varied selection of premium bud — some still have to take it wherever they can find it. Even U.S. government researchers are forced to work with what most experienced cannabis users would deem pretty bad weed.

You don't want to get ripped off and smoke an inferior product, of course. So how can you tell if your flower isn't up to snuff (or puff)? Believe it or not, you don't need a doctorate in botany or chromatography instruments to tell whether your stash is shit. Read on, esteemed stoner, and learn some simple warning signs.

It's full of stems and seeds

A good rule of thumb in buying weed is that you want weed you can actually, uh, smoke. The stems of cannabis plants — though they may count toward the weight of your gram or eighth — are pretty much useless in that regard, so the less there are, the better. Seeds are even worse; they'll literally explode when set on fire, potentially blowing out an entire bowl or ruining your joint. Even sellers of low-grade ganja usually won't sell you stuff with seeds in it, but if you're continually finding a few in each bag, it's time to find a new source.

Its color, scent, texture and flavor seem off

In this sense, marijuana is like any produce you might buy at the grocery store: You can just tell when it's healthy and ripe for consumption. Good weed has more vibrant color, like a thriving plant. It has a heady, pungent aroma and taste. It's somewhat springy, dense and coated with sticky, frosty, crystalline trichomes — tiny glands packed with THC, the psychoactive cannabinoid that gets you high. Bad weed, by comparison, looks like some junk you yanked out from underneath your lawnmower.

It's paler or duller in color, sometimes brown or yellowish. It's often dry or more crumbly, and it lacks a distinctive smell (although sometimes it smells like hay or grass). It's also sure to taste terrible. In certain cases, this kind of marijuana may have been "blasted," or entirely stripped of its cannabinoids to make butane hash oil. Either way, avoid it.

It doesn't get you high. Or worse, it makes you feel ill

Arguably the worst thing about bad pot is that it's not very potent — which means you have to smoke a ton of it to feel anything like the high you're after. In that case, you're liable to get a headache before you're even halfway stoned. Some users have encountered weed so crummy that it doesn't seem to work at all. If you wind up with bud that only produces noxious smoke and induces a general nausea or cranial pain, what's the point? Ditch that garbage and find out where the dank nugs are at — because you deserve better.

It's moldy, rotting or poorly cultivated

As with the food in your pantry or refrigerator, you've got to keep an eye out for mold and rot. These can afflict even decent marijuana, and they look like the mold and rot you're used to finding on bread or cheese — furry discolorations on the surface. Packing this crap in your bong can make you seriously sick, don't risk it.

Another visual red flag would be larger marijuana leaves attached to your nugs, which indicates a sloppy "trim" when the buds were separated from the plant. Cannabis that gets trimmed by machines (as opposed to carefully trimmed by hand) might have diminished potency, and the leaves themselves don't offer much of the cannabinoid compounds that people prize in marijuana.

It's not actually cannabis

Almost every stoner of experience you'll meet has a story about the time they bought weed that turned out to be anything but. It could be anything from crushed oregano to sage to basil to a wad of old, dried-out lettuce balled up in some cling wrap. Catnip is another popular pot substitute.

If it doesn't look like marijuana buds, well, it's probably not, so keep your wits about you. The best way to avoid this scam is to get your weed from someone you trust — and never, ever that friend who runs a YouTube prank channel. If he really insists it's the good stuff, then he should have no trouble taking the first hit, right?

More like this
Meet the weed activists giving fat joints to vaccinated New Yorkers
By Rajul Punjabi
Choosing the right weed strain for your vibe
By Melissa Pandika
Breaking into the weed industry: A guide from the BIPOC who have done it
By Melissa Pandika
Stay up to date