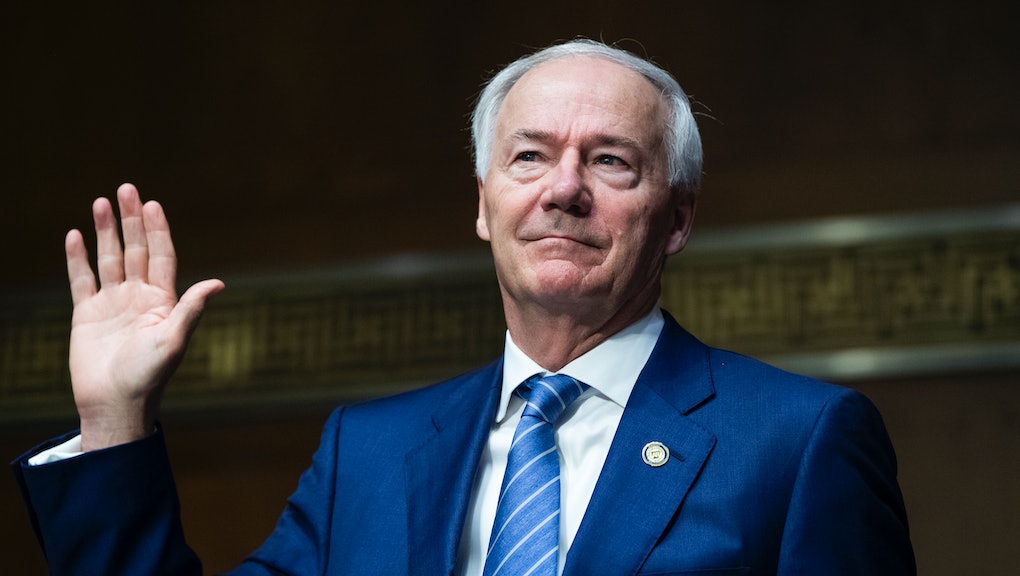 I don’t know if Arkansas Gov. Asa Hutchinson is a Sinatra fan, but if I had to guess, I’d say he probably has the second verse of “My Way” running through his head these days.

As COVID-19 cases — fueled in no small part by the highly infectious Delta variant — skyrocket across his state, Hutchinson offered a belated mea culpa on Tuesday, admitting that perhaps that bill he signed past spring to ban mask mandates wasn't the best idea, after all.

"In hindsight, I wish that it had not become law," Hutchinson confessed during a press conference in which he announced a new push to "create an exception" in Act 1002, the state's anti-mask mandate. Specifically, Hutchinson has called for Arkansas lawmakers to return for an "Extraordinary Session" to grant local school boards the authority to require masks for school children currently ineligible for COVID-19 vaccinations — authority he'd previously denied them.

"I understand that some legislators are reluctant to allow school boards this freedom, even in this limited way,” Hutchinson said in a press release that accompanied the conference. "But the exceptions for which I am asking are true to the conservative principle that puts control in the hands of local government."

“I am asking lawmakers to simply allow public school boards and open enrollment charter schools to make their own decision to implement masking protocols to protect children younger than 12 in a school building, school bus, or other educational setting where several students are in close proximity," he added.

Despite Hutchinson's belated realization that maybe, just maybe, blanket bans on mask-wearing are not the best way to address an ongoing pandemic, state lawmakers aren't exactly leaping to answer his call.

"As of right now I don't see us getting it this week," Republican Senate President Pro-Tempore Jimmy Hickey told the Arkansas Democrat Gazette on Wednesday.

Senate Republican leader Scott Flippo agreed, telling the paper that there's no real motivation among his caucus to change the ban, and that "I don't see that changing."

Meanwhile, as Hutchinson works to smooth over his abrupt about face at home, his fellow Republican governors are doing everything they can to duplicate his initial mistake, by banning local mask mandates in their home states, even while Delta variant cases surge among the unvaccinated.

"Why would we have the government force masks on our kids when many of these kids are already immune through prior infection, they’re at virtually zero risk of significant illness and when virtually every school personnel had access to vaccines for months and months?" Florida Gov. Ron DeSantis asked after signing a bill to withhold funds from local communities that chose to institute mandatory masking for school children ineligible for COVID-19 vaccination. His state just broke its own record for COVID-19 hospitalizations for the second day in a row.

In Texas, meanwhile, Gov. Greg Abbott recently issued an executive order that would fine local governments that instate mask mandates up to $1,000, saying that "Texans, not government, should decide their best health practices, which is why masks will not be mandated by public school districts or government entities."

While neither Abbott nor DeSantis has experienced the same sort of epiphany that their colleague in Arkansas has, they have drawn the ire of President Joe Biden, who targeted local governments that have actively worked to counteract the various tried and true methods used to mitigate the ongoing COVID-19 surge.

"I say to these governors: Please help. But if you aren’t going to help, at least get out of the way,” Biden said during a Tuesday press conference. “The people are trying to do the right thing. Use your power to save lives."

Whether DeSantis, Abbott, and the other conservative lawmakers intent on defending the abstract idea of "freedom" at the expense of the concrete concept of "not dropping dead" will actually listen remains unclear.