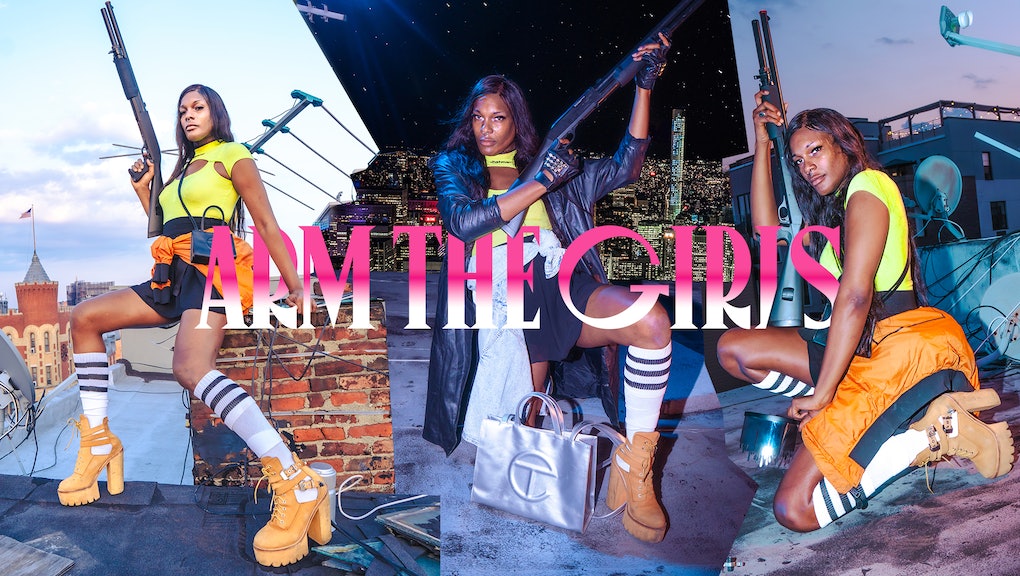 To reimagine what safety and protection looks like for Black, Indigenous queer and trans femmes of color, Davis and other members of We are the Ones We’ve Been Waiting For — the Oakland-based mutual aid collective of creatives he co-founded — started the Arm the Girls initiative. They shot a fashion editorial-style photo series of trans people armed with guns, and distributed free self-defense kits: a designer bag holding a stun gun, a pocket knife, pepper gel spray outfitted with a seatbelt cutter and window smasher, a personal sound alarm, emergency mutual aid, and paid self-defense classes.

Due to the logistical challenges of navigating weapons laws, which vary state by state, We are the Ones now hands out individual self-defense tools at their events instead. On June 19, they threw a pepper spray distribution party in New York City with all-trans DJ collective New World Dysorder and Strategic Transgender Alliance for Radical Reform (STARR), founded by Marsha P. Johnson and Sylvia Rivera, the trans women credited with starting the Stonewall Riots that launched the LGBTQ+ rights movement.

The focus on arming oneself might strike some as radical, but it's an understandable response to the current reality for BIPOC queer and trans femmes: Since they're often threatened with violence, peaceful negotation is rarely an option for them. Arm the Girls sends a larger message that these communities are mobilizing in a world that has victimized them long enough.

Arm the Girls is one of a number of mutual aid efforts that have cropped up around the country to equip Black and brown trans femmes with self-defense tools, such as STB (Secure the Bag) Safety in New York City, Defense Fund ATL in Atlanta, and Trans Self Defense Fund Los Angeles. While each of these groups seek to meet the unique needs of the communities they serve, all of them empower trans people to physically protect themselves in a society they can’t rely on to keep them safe.

Davis, who uses he/him and they/them pronouns, co-founded We are the Ones with Adonis Emory, a stylist, art director, and set director, who also happened to be his neighbor in East Oakland. They started collaborating on photoshoots, and in 2018, a mutual friend invited them to host an art show as part of a larger pop-up market and benefit for VisibiliT, an organization that works with asylum seekers and migrants in the San Francisco Bay Area. The proceeds from Davis and Emory’s show went to a coalition that had been providing sanctuary housing and legal support for queer and trans asylees, and funded their commissary payments, legal fees, and medical expenses.

A series of photoshoots of trans people armed with guns. The point wouldn’t be to glorify gun violence — Davis doesn’t advocate gun ownership — but to start a larger conversation about who we believe is allowed to protect themselves, and who isn’t.

As the art show came together, Davis and Emory talked about how their community of queer and trans people of color had always shown up for them. “We want to hold our community down, too, and we literally can’t wait for the government, or for the system, or for anyone to do what’s right,” Davis says. “We have to do it ourselves.” The duo landed on We are the Ones We’ve Been Waiting For as the name of their show and mutual aid collective. They later realized, to their delight, that Obama had uttered the phrase in a 2008 speech, while June Jordan had written it in “Poem for South African Women.”

We are the Ones continued to organize local mutual aid funds through art, music, and parties. Back in 2019, they threw a party to fundraise for new DJ and sound equipment for New World Dysorder. Last June, another mutual aid project they organized covered the paint, supplies, and fees needed to create a giant mural near Oakland’s Lake Merritt that says, “All Black trans + queer + nonbinary + women's + disabled + imprisoned lives matter.”

In response to feedback from their community during quarantine, they started doing more livestreams and mutual aid funds for queer and trans people, sex workers, and others who couldn’t access pandemic assistance, health care, or other resources. As the Black Lives Matter Movement swept across the country last summer, they also organized protests. “Being out in the street and involved in the movement, we realized that there wasn’t a lot of inclusion for queer and trans people at protests,” Davis says. “There weren’t even many women on microphones.”

An incident involving a nonbinary trans femme friend at one such protest threw this marginalization into harsh relief. As she spoke into the microphone about how movements need to include everyone — because otherwise, they’d amount to a fight for privilege, not liberation — some in the crowd booed and spat on her, Davis says. He also recalls a group of men arguing with her.

And while the Lake Merritt mural We are the Ones painted with other Black and brown queer and trans artists, as well as community volunteers, received a ton of press, it also made them targets. People posted anti-Black, transphobic comments in response to the coverage. Davis notes that many media outlets neglected to mention We are the Ones and the other artists involved, further erasing them. Meanwhile, the number of trans deaths continued to climb.

“We just got kind of fed up with the narrative of queer and trans people being victims and people who can be disproportionately murdered, and then also scrutinized when we speak up about it,” Davis says.

As he mulled over how to change the narrative about trans death, he had an idea: a series of photoshoots of trans people armed with guns. The point wouldn’t be to glorify gun violence — Davis doesn’t advocate gun ownership — but to start a larger conversation about who we believe is allowed to protect themselves, and who isn’t. He points out that people rarely bat an eye when they see the police or military carrying guns. “That is so normalized in our culture,” he says. “But when you see a Black person with a gun, automatically, they’re a criminal, and when you see a queer or trans person with a gun — oh wait, you never see that.”

Besides creating a photo campaign, We are the Ones wanted to empower BIPOC queer and trans femmes of color in the Bay Area to defend themselves in a tangible way through Arm the Girls, which they organized with Join The Movement Coalition and VisibiliT. They used the self-defense kits that Chicago-based group THORN distributes to Black and brown trans people as a model for their own project, and consulted with Trans Self Defense Fund Los Angeles.

Arm the Girls launched on Instagram late last year with posts that included photos of armed trans people, as well as information on the self-defense kits and how to help fund them. Telfar Clemens, who designed the bag containing the self-defense items, took note and donated 50 bags to Arm the Girls.

Davis says the response to the campaign was generally positive, with a few exceptions. Some saw the Telfar tote the kits came in as excessive, pointing out that the cost of the bags could’ve gone toward more self-defense tools. But Davis believes queer and trans people’s existence shouldn’t be limited to their protection: “Why can’t we have a nice bag?”

In the same vein, he sees the aesthetic of Arm the Girls — like the haute vibe of the photo campaign — as more than ornamental. “I feel like the visibility, to see ourselves as powerful, strong people is really important,” says Davis, who used to organize photoshoots at a streetwear company. He adds that packaging mutual aid in a way that’s tasteful and culturally relevant to the people it’s serving also entices them to be a part of it.

The parents of one of the models in the photo campaign were mad at what they saw as a glamorization of gun violence — which, for Davis, only affirmed that the images had fulfilled their purpose. “That’s exactly why we're doing this, so that we can have these kinds of conversations about why this is angering to you, but on the flip side, white people with guns aren’t,” he says.

If you’re a Black, Indigenous queer or trans femme of color in the San Francisco Bay Area in need of self-defense tools, he suggests following We are the Ones on Instagram and staying tuned for future distribution events. You can still contact them if you’re outside the Bay, but because of their hyperlocal focus, they’ll try to identify another group in your region doing similar work.

You can donate to Arm the Girls via Venmo (@wearetheones) or Cashapp ($waitingforUS) — just remember to include a note indicating that it's for Arm the Girls. Besides pooling their diverse skills as creatives to organize fundraisers for community members in need, We are the Ones also posts their mutual aid requests on Instagram, with information on how to donate to them directly. “When people talk about destroying capitalism and destroying the patriarchy, that’s a great idea but what does that actually look like?” Davis says. “I feel like mutual aid is the answer."

In other words, mutual aid allows Black and brown queer and trans femmes to keep each other safe, rather than rely on a society that constantly challenges their right to even exist. “We want to see ourselves as beautiful, strong, resilient people who don’t take shit,” Davis says, “as people who have self-love, and the power and love of a community that's down for the cause and down to support.”