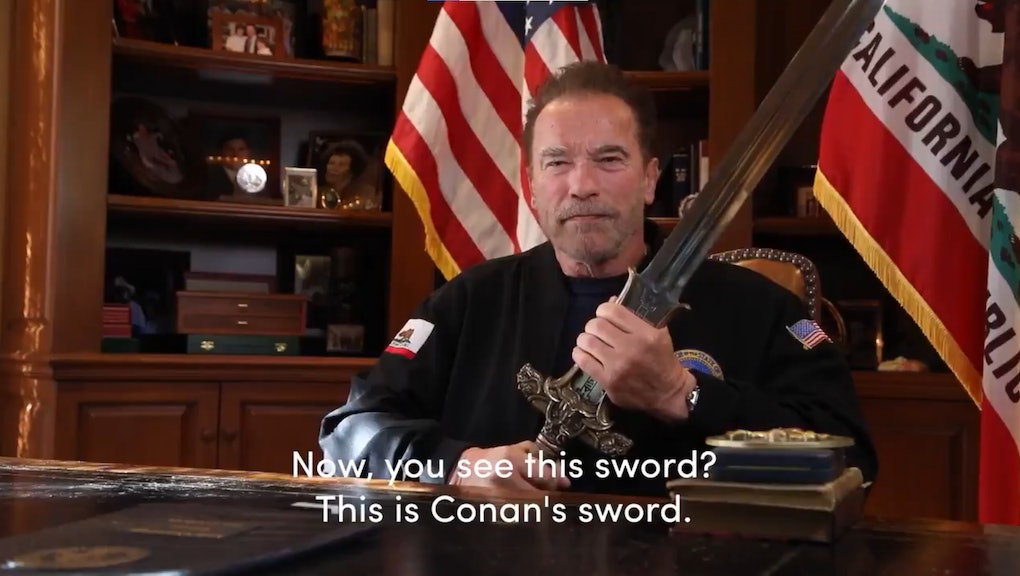 In the immediate aftermath of something like last week’s Capitol siege, polling isn’t always a helpful indicator, but of course there was still polling. Nearly one fifth of Republican voters approved of the attack as of Friday, but 88 percent of all Americans were either opposed or strongly opposed to the rioters. Given how inflamed the discourse around this has been — and is likely to be further inflamed by the full thrust of the right-wing media apparatus, the social media ban of President Trump, and impending impeachment vote — Americans could use something to unify the overwhelming majority who weren’t into what happened on a basic level. So here's Arnold Schwarzenegger with his best shot.

The former Governor of California, star of action classics like The Terminator, True Lies, and Predator, and father of a housebroken pet donkey and miniature pony, posted a seven-minute video to Twitter on Sunday, addressing the fraught moment. While there’s ample debate to be had over whether now is the time for coming together with the side that widely hasn't abandoned the rhetoric that led to Wednesday’s riot, Schwarzenegger nearly took that exact approach — but didn’t let routine cruelty off the hook.

Schwarzenegger began by describing Kristallnacht, the violent anti-Semitic rampage that consumed Nazi Germany in 1938, leaving 91 Jews dead and thousands more in concentration camps. Although the scale is immeasurably greater and more significant, he takes the questionable leap of comparing this event to what happened at the Capitol last week:

“Wednesday was the day of broken glass right here in the United States... The broken glass was in the windows of the United States Capitol. But the mob did not just shatter the windows of the Capitol. They shattered the ideals we took for granted. They did not just break down the doors of the building that housed American democracy. They trampled the very principles on which our country was founded."

The action hero spoke movingly about growing up in a post-WWII Austria, and how his father and other adult men in the neighborhood who were in league with the Nazi party, would return home and inflict drunken abuse and rage on their families. Schwarzenegger claims that not all of these men were virulent anti-Semites or even especially zealous in their politics, but were nonetheless strung along down a remarkably destructive path.

Schwarzenegger extolls the “public servant’s heart,” and talks of healing and great American comebacks from this dark era that seems without end. Then, somewhat abruptly, he picks up his sword from Conan the Barbarian that’s been sitting on his desk, out of frame, this whole time:

Anyway, a king of the theatrics and hefty metaphors, Schwarzenegger ultimately resolves on uniting behind President-elect Biden and the long healing ahead after the “failed leader” currently occupying the White House. We’ll see how that works out!

You may recall, back in the early days of the pandemic, Schwarzenegger was holed up at home with his miniature pony and donkey. Gliding above the dumb culture war bullshit to come, he just told people to stay home and fight the virus responsibly, with some incredibly cute fellas by his side. The guy’s provided as clear a blueprint as anyone for how to thrive out of office: allow your pet donkey and miniature pony to roam free indoors, try best not to alienate anyone, and just ride out the twilight years of your career.

More like this
Caitlyn Jenner is reportedly filming a new reality show instead of campaigning for governor of California
By Rafi Schwartz
The Trump/O'Reilly fashapalooza is putting up some sad ticket sales numbers
By Rafi Schwartz
Why do we give a shit about Tucker Carlson?
By Rafi Schwartz
Stay up to date