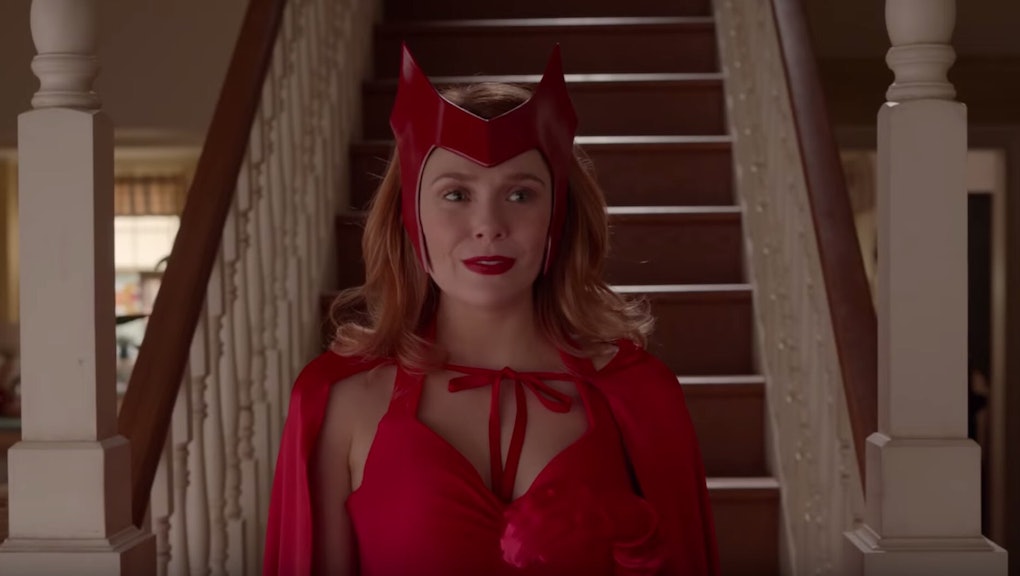 As a Romani witch, I can't stand 'WandaVision'

In a recent episode of WandaVision, “All-New Halloween Spooktacular!” the titular superhero Wanda Maximoff a.k.a. the Scarlet Witch (played by Elizabeth Olsen) appears in her retro costume — red headband, leotard, tights, and cape — announcing that she’s a “Sokovian fortune teller.” The reference is a sidelong nod to the comic-book character Wanda’s part-Romani ethnicity that Olsen, a white actress, says she fought for.

But it should be painfully obvious that neither the Scarlet Witch’s headband nor leotard is part of our culture — it is not, as Olsen offensively claimed, "a gypsy thing" — and passing it off as such only layers on the misrepresentation. Many Roma like myself are frustrated that a rare opportunity for mainstream representation character boils down to a white lady in cosplay, especially when so many talented Roma actresses abound.

While the Scarlet Witch has plenty of magic, she does not need to fall into the stereotype, nor have her identity erased.

Set in the Marvel Cinematic Universe, WandaVision presents a vintage sitcom world in which Wanda is suddenly reunited with her husband, the android superhero Vision, who had been killed in Marvel’s Infinity Wars by Thanos, a clue that reality isn't what it seems. When fellow residents ask the couple where they come from, or why they’re in the perfectly off-kilter town of Westview, Wanda and Vision don’t know, and the veneer of their pleasant domestic life is temporarily shattered as they struggle to remember. As the show goes on, it becomes increasingly clear that Wanda is wielding her mutant powers to construct and control their reality, driven by her agonizing grief over the family she has already lost. What many viewers may not realize, however, that the powerful Romani witch archetype dates back to the Middle Ages. While it is a stereotype, it’s rooted in a fascinating truth.

Make no mistake, being a witch is a job like any other. I was trained by my grandmother, I studied hard, I started a business, and I take bookings in my Google calendar.

The few Roma who work as fortune tellers and witches, like myself, do not do so because we are magical, but because it’s a job that we were historically forced into. Roma are a diasporic ethnic group originating in 10th-century India, and when they arrived in Europe in the 1300s and 1400s, dark-skinned with many gods, they were relentlessly persecuted. Enslaved, legally hunted, murdered, and shunted off into the margins of society, Roma were allowed to work as performers, metal workers, horse traders, craftspeople, agricultural workers, and fortune tellers, but little else. Palmistry, card reading, tea leaf and coffee reading, and other forms of divination were brought by Roma from India and the Middle East, and Roma were consulted by Europeans for their magical, un-Christian needs because they were seen, along with other nonbelievers, as dangerous, demonic, and mystical. Roma women were cast as witches, and discriminated against, but made the most of this means of income to survive.

Today, some Roma do call themselves witches, and serve as healers and spell-casters in a community, but make no mistake, being a witch is a job like any other. I was trained by my grandmother, I studied hard, I started a business, and I take bookings in my Google calendar. This is the context that most people miss when creating (or, in this case, adapting) Romani witch characters like Wanda Maximoff, and while the Scarlet Witch has plenty of magic, she does not need to fall into the stereotype, nor have her identity erased.

Now, there are many excellent Romani actresses who could have been considered for the role. The first who comes to mind is the award-winning actress, writer, and filmmaker Mihaela Drâgan, who pioneered the burgeoning movement, Roma Futurism. Inspired by similarly identity-based sci-fi aesthetics Afrofuturism and Sinofuturism, Drâgan created the cyberwitch archetype, a hybrid of the traditional hex-casting Romani witch and code-writing tech genius. A co-founder of feminist Romani theatre troupe, Giuvlipen — which means feminism in Romani — Drâgan and her fellow co-founder Romani actress Zita Moldovan recently produced a filmed play, ROMACEN: The Age of the Witch, about Romani cyberwitches who curse fascist politicians with magic and malware and time-travel to try stop the oft-forgotten genocide of Roma and Sinti in World War II.

“I love the Scarlet Witch," Drâgan told Mic, “and Marvel fans always photoshop me as this character.” She added the names of other Romani actresses she would like to see in the role: Simonida and Sandra Selimovic from Austria, Farkas Franciska from Hungary, and Alba Flores from Spain.

Roma are targeted by 'Gypsy police task forces' and face persistent discrimination. But we are not represented in the US Census or in politics, and barely feature in the media.

Another candidate for Wanda could have been filmmaker Alina Serban, who recently won best actress for her starring role in Gipsy Queen, centering on the life of a Romani woman who boxes to support her children. Boxing is another job that Roma have historically worked in Europe, alongside Jewish people, Black people, and other marginalized groups. Serban’s short film, Letter of Forgiveness, which she wrote, directed, and starred in, won accolades for its depiction of the 500-year-long enslavement of Romani people in the Balkans.

Although WandaVision's Wanda is from the fictional Eastern European country Sokovia, the original comic book versions of Wanda and her brother Pietro face violent persecution for their Romani ethnicity as a major plot point. Particularly in Europe, Roma still face police brutality, systemic racism, disproportionate levels of poverty, and lack of access to clean water housing because of antigypsyism. Including reference to this and hiring talent like Serban would have added depth to the series that, some critics have complained, is lacking.

Representation matters. Wanda’s Romani ethnicity has been well-stated in the comic books, sometimes capturing the discrimination and violence that Roma face, and other times falling flat and stereotypical. Marvel also owes us, as Roma are often rendered as mentally unstable thieves, such as Dr. Doom, Wanda and Pietro’s community, and Wanda herself, and the entertainment giant capitalizes off of these stereotypes, reinforcing them all the while. And let's not forget veteran Marvel writer Peter David’s outrageous claim at a 2016 LGBTQ X-Men panel that Romani representation is fine as it is, because he “learned” on a trip to Romania that Roma cripple their children to make them more effective beggars. Never mind that the kids he saw had a genetic disorder that was untreated because Roma are impoverished and don’t receive equal health care in Europe, because of racism.

In the US, Roma are targeted by “Gypsy police task forces” and face persistent discrimination, as shown in this Harvard Study. But we are not represented in the US Census or in politics, and barely feature in the media. In fact, many Roma in the industry hide their ethnicity if they’re able to and pretend to be something else to avoid repercussions.

Every opportunity we get for accurate and positive representation is essential to us because it shapes the way people understand us. Just because it’s a Halloween headband doesn’t mean it can’t be hurtful.

More like this
'The Nevers' will be so much better when Joss Whedon has nothing to do with it
By Kara Weisenstein
'Exterminate All the Brutes' is a messy, ambitious documentary that ties together genocide, white supremacy, colonialism ... and Josh Hartnett?
By Nicholas Russell
How late night TV marked the Derek Chauvin verdict
By Kara Weisenstein
Stay up to date