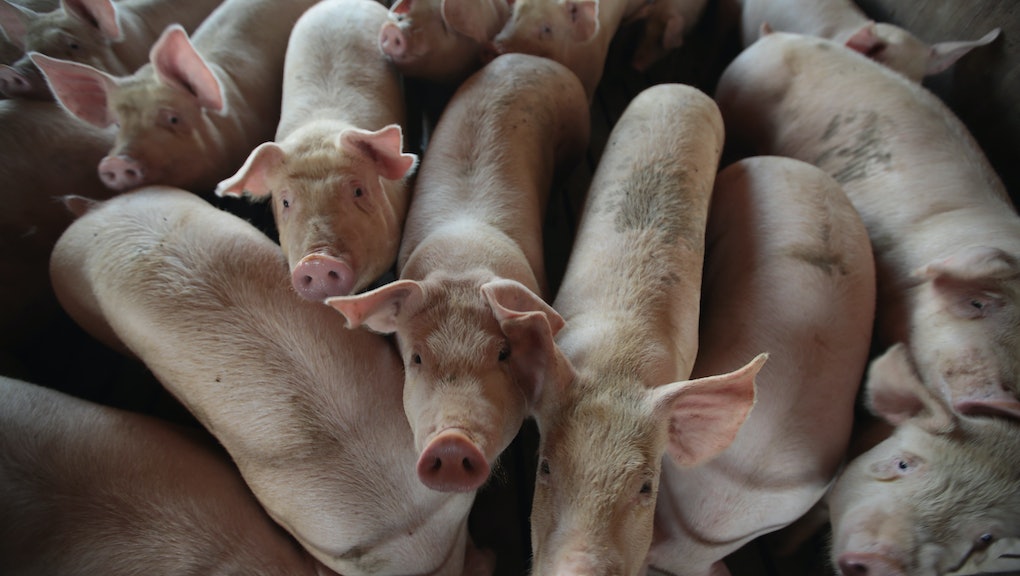 As coronavirus closes meat plants, farmers are being forced to shoot or gas their pigs

Coronavirus outbreaks have shut down meat processing plants across the country. Besides sick workers and shortages, COVID-19 has created yet another grim scenario: a glut of pigs that farmers have no choice but to kill, without ever using for food, the New York Times reports. Some have taken to gassing and even shooting their pigs en masse. All of this has taken a huge economic and psychological toll on the pork industry.

To convey the scale of the crisis, over the next six weeks, the backlog in Iowa could hit an estimated 600,000 hogs, per the Times. Especially vulnerable are those who run large-scale pig farms, whose animals are slaughtered at massive facilities owned by meat-producing companies like Tyson. And mitigating efforts by the White House, such as President Trump’s executive order allowing plants to stay open, would still fall short of curbing the waste — all while grocery stores and restaurants face shortages, and out-of-work Americans struggle to feed themselves.

The pandemic has sent shockwaves through other sectors of agriculture, too. Poultry processor Allen Harim Foods had to kill close to two million birds in April, according to the Times, which previously reported on farmers burying onions and dumping milk. Together, these examples of extreme waste point to an agricultural system made delicate thanks to decades of consolidation. Now, even if only a few meat processing plants close, pig farmers basically have no other options.

Over the course of around half a year, farmers raise pigs to grow more than 300 pounds, the Times explains. Those that overly exceed that amount can endanger meatpacking plant workers, who have to carry the carcasses. While plants remain closed, many farmers are trying strategies like changing up recipes for feed to make it less tasty, in an effort to reign in their pigs’ growth.

Since there’s not much of a market for 300-pound pigs, many farms have resorted to previously unthinkable alternatives, like aborting sows’ pregnancies, the Times reports. Iowa farmer Dean Meyer told the newspaper about how he and eight farmers he’d partnered with have had no choice but to kill 125 piglets a week since mid-April.

Although Meyer told the Times that they’d compost the piglets, discarding fully grown hogs presents a bigger challenge, since waste from their remains could enter waterways, per the Times. In Minnesota, animal health officials have set up two vast hog composting sites and aim to build up to three more in the next few weeks. Farmers, who already spend around $130 raising each pig, pay to transport their bodies to these sites. For some, their losses have amounted to as much as $390,000 in a day.

Killing so many animals at once only to dispose of them can also have emotional consequences. “There are farmers who cannot finish their sentences when they talk about what they have to do,” Greg Boerboom, a farmer in Minnesota, told the Times. “There will be suicides in rural America.” Meyer said he doesn’t even want to know how his partners killed their piglets.

As consumers, we don't have to see what happens behind the scenes of food production. We see that our local fast food restaurant or grocery store is running low on meat — and while that's a bummer, it’s only a sliver of this pandemic’s impact on agriculture, and the people and animals sustaining it.

More like this
What is sploshing, the food fetish that's taking over TikTok?
By Melissa Pandika
A mother and daughter have been charged with murder after performing a back alley butt lift
By Melissa Pandika
Scientists are potty-training cows in an effort to save the planet
By AJ Dellinger
Stay up to date