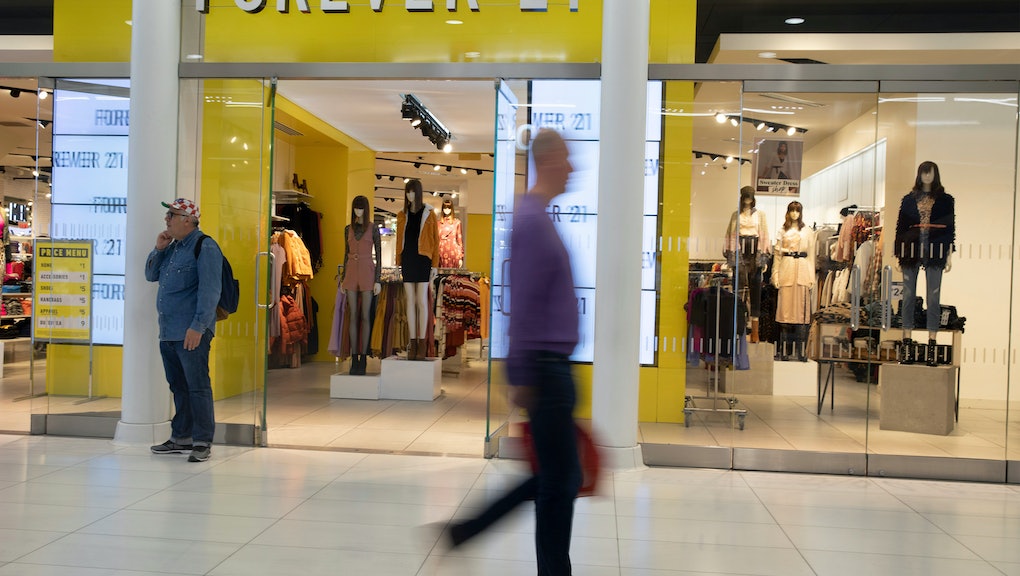 Forever 21 filed for bankruptcy over the weekend, becoming the latest in a long list of retailers to go belly-up as consumers gravitate away from fast fashion and brick-and-mortar shopping.

According to the New York Times, Forever 21’s revenue dropped from $4.4 billion in 2016 to $3.3 billion last year. As part of its bankruptcy filing, the company secured $350 million in emergency funding to stay afloat during a comprehensive restructuring. It’ll shut down operations in 40 countries, including Canada and Japan, and plans to close up to 178 stores in the US and up to 350 globally.

A lot of retail stalwarts have floundered amid shifts in shopping behavior. In addition to Forever 21, brands like Payless, Claire’s, Barney’s, Diesel, Sears, and Toys ‘R’ Us have all gone out of business since 2017. Many of the casualties were once stalwarts at American malls, which highlights the toll online retailers like Amazon have taken on in-person shopping.

Part of Forever 21’s downfall also stems from its failure to pivot to online sales with the rise of competitors like ASOS and Fashion Nova. Whereas those brands offered their vast inventories to anyone with a credit card and an internet connection, Forever 21 made it notoriously difficult to track down styles anywhere but in-store. And stock at each location seemed to vary based on the neighborhood. It could be dizzying. Meanwhile, other retailers nailed the mass-produced and widely available online shopping model, where a customer could see a garment on social media and buy it for themselves with a few clicks.

Forever 21’s current goal, according to executive vice president Linda Chang — whose parents immigrated from South Korea to California and founded the company in the 1980s — is to keep its website and higher-earning stores up and running while making comprehensive changes to its overall business model. “What we’re hoping to do with this process is just to simplify things so we can get back to doing what we do best,” she said.

But Forever 21 and its contemporaries like H&M and Zara made a name for themselves selling disposable fashion, and consumers in 2019 are more resistant than ever to conspicuous consumption. Textile production will account for 25% of all global carbon emissions by 2050, and factory workers often toil in inhumane conditions. As shoppers have wizened up to the true cost of cheap clothing, many have dumped fast fashion for more sustainable apparel options. According to the 2019 Resale Report by online thrift store thredUp, 72% of people today prefer to shop from eco-conscious brands.

The bankruptcies of Forever 21 and companies like it could be a death knell for the gluttonous age of fast fashion. Secondhand shopping is an exploding trend with no indication of slowing. According to retail analytics firm GlobalData, the resale market has grown 21 times faster than the retail market in the past three years.

That may be bad news for many brands, but it’s good news for the planet. Amid dire warnings from climate scientists, pivoting towards sustainability could be a matter of survival for shoppers and retailers alike.

As Forever 21 reconsiders its business model, perhaps the Chang family should ruminate on the Bible verse that adorns each one of its shiny yellow shopping bags: John 3.16. “For God so loved the world that he gave his only begotten Son, that whosoever believeth in him should not perish, but have everlasting life.” Most people interpret the verse as a summary of Christian belief — that their God sacrificed his son for the salvation of humanity.

Humanity faces probable extinction unless it changes its behavior in a massive way, and realistically, it’ll be up to the titans of industry to choose sustainability over capital gain — which, let’s be honest, feels like a long shot. The garment business ushered in the Industrial Revolution and mass pollution; today, more than 60 percent of fibers are synthetics derived from fossil fuels, meaning they’ll never decay. As the New York Times put it, “Future archaeologists may look at landfills taken over by nature and discover evidence of Zara.”

Forever 21 has an interesting opportunity: to atone for a past as a fast fashion behemoth whose trash likely litters the globe and remake itself into a pioneering retailer of recycled clothing. It’s a far-fetched, starry-eyed proposition, sure. But it’s also a damn good idea.

More like this
What could possibly explain Carrie Bradshaw shopping at Forever 21?
By Kara Weisenstein
Dua Lipa has officially distanced herself from DaBaby
By Kara Weisenstein
8 shows like 'Ted Lasso' to watch if you need more feel-good TV
By Brandon Yu
Stay up to date