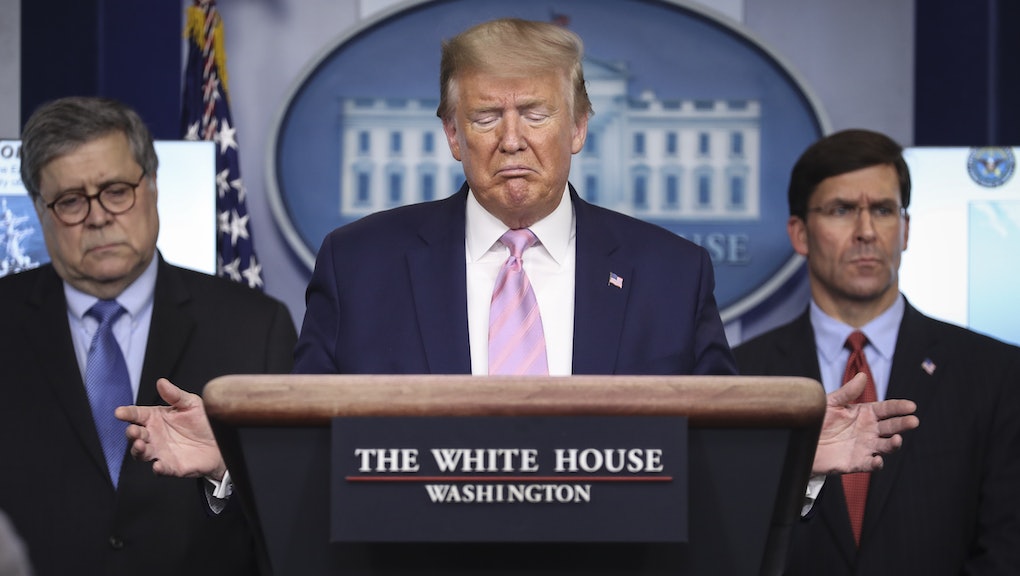 At his coronavirus briefing, Trump boasted about his Facebook following

The same day that medical researchers announced that upwards of 5,000 Americans had died from coronavirus to date — with more than 200,000 cases confirmed nationwide — President Trump appeared for what has become a daily pandemic-centric burlesque show to assure a panicked nation that he was doing very well on social media.

During Trump's coronavirus briefing Wednesday evening, a reporter changed topics and asked the president what effect he thinks his tweets will have on increased bellicosity between the U.S. and Iran. Trump insisted that actually, everything was fine and good, because "I just found out I’m number one on Facebook."

"I thought that was very nice, for whatever it means," the president said, while facing reporters about his government's response to a once in a lifetime global pandemic. Data shows there were nearly 2,000 new cases of coronavirus reported in the U.S. on Wednesday.

The president's Facebook boast was just a small part of what made Wednesday evening's press conference so embarrassing. In addition to feigning humble delight at his social media presence, Trump also lashed out at Fox News's chief White House reporter John Roberts, who had the gall to ... ask a decent question about the documented dismantling of the federal global health security team during the president's first term in office.

"What are you working for CNN?" Trump snarked at Roberts. "I thought you were with Fox. But Fox isn’t so easy either, don’t kid yourself."

Elsewhere during the president's briefing, Trump veered away from discussing the coronavirus pandemic to fear-monger about the threat of terrorism and drugs.

Pledging to "protect the American people from the deadly scourge of illegal narcotics," Trump vowed to not let "the drug cartels exploit the pandemic to threaten American lives." And when asked about rising domestic violence reports, the president appeared to mishear the question and in clarifying, blurted out, "Mexican violence?"

It's worth noting that the president's "I'm so great, you're so mean, and also, drugs" routine came just 24 hours after some pundits fell over themselves to laud his previous briefings — like the one where he said 200,000 dead Americans would mean he'd done a "very good job" — for evincing a "sober" shift in tone. Somehow, three years into his administration, we're still playing this incredibly stupid game.

Meanwhile, Trump continued to defend his entirely unsatisfactory pandemic response update on Twitter where, on Thursday morning, he lambasted the "complainers" for their "insatiable appetites" for health care equipment, which he said might be due to "(politics?)"

It's only April 2, and already this month has been one hell of a year.

More like this
FEMA said it would reimburse cities for housing homeless people. Most cities ignored the offer
By AJ Dellinger
The CDC's eviction freeze has been unfrozen by a federal judge
By Rafi Schwartz
West Virginia is bribing young people to get vaccinated with cold hard cash
By Vanessa Taylor
Stay up to date