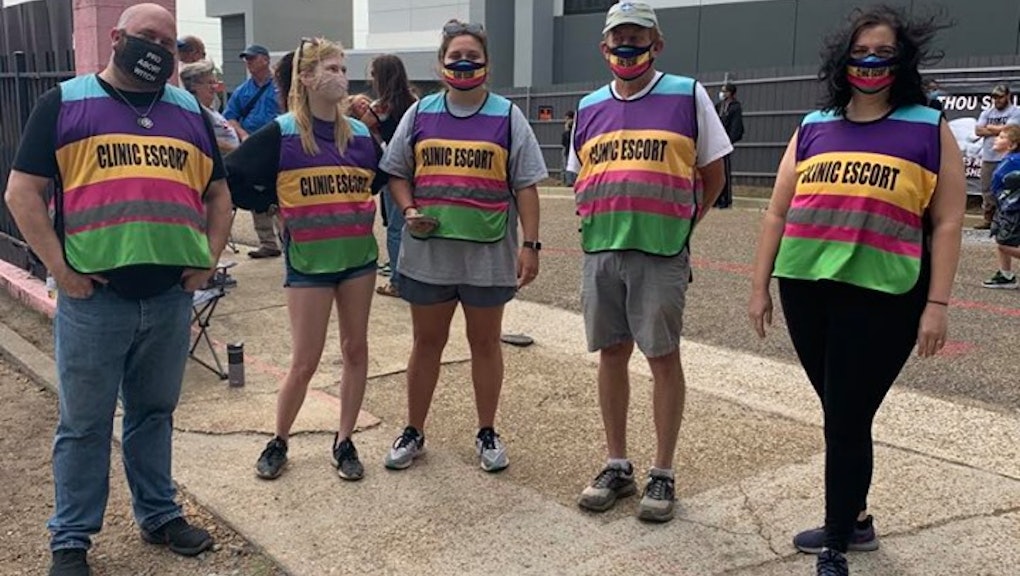 At independent abortion clinics, escorts are protecting patients by getting loud

HUNTSVILLE, Ala.—When a car arrived at the Alabama Women’s Center in Huntsville, Christa White was at full attention. White, wearing a reflective pink vest with CLINIC ESCORT written across it, made her way through the parking lot to greet the patient.

An anti-abortion protester had also locked in on the approaching person. White picked up her pace.

The rain that day meant White was carrying an umbrella — but on top of blocking the light drizzle, the umbrella could also help White create a visual barrier between the incoming patient and protesters and their signs. Still, umbrellas don’t block sound. The protester, a young man, started shouting at the patient.

Unlike at many abortion clinics though, it was difficult to make out what he was saying, because White was shouting right back. “No! Go home! Nobody wants you here!” she yelled, stretching out each vowel to keep a steady shout and muffle the protester out.

A family of protesters had arrived mid-morning that day — later than usual, actually. But the small cluster of volunteers was prepared for the square-off, having set up their pop-up chairs in a semi-circle in the parking lot to wait for the coming crowd. Eventually, the escorts recognized the cars of these frequent protesters looking for parking spots close to the clinic. Escorts could list off the protesters' names, in fact — as well as the choice nicknames they’d created for them — while the group walked toward the front of the clinic. Soon, the family was joined by another frequent protester, too.

“We’ve let them get too comfortable.”

The volunteers play light, pop hits. They want the music to help obscure protesters’ yelling, but to not be so loud as to violate the city’s noise ordinance. But the dissonance between the bubbly music and the protesters’ angry posters decrying abortion is acute. Even as the Huntsville clinic escorts are prepared for hostile face-offs with the protesters, the atmosphere among them is chatty and fun. They have been doing this for long enough to know a little levity goes a long way.

White and her fellow escorts are doing something unusual for abortion clinics: They are talking with protesters, yelling over them, and generally doing whatever they can to make them uncomfortable. Whereas escorts typically put their heads down and shuffle their patients wordlessly through a hostile crowd, these volunteers are choosing engagement over avoidance instead. And while they are an oddity in the clinic escort world, they’re hoping to spark a new way of dealing with protests.

Escorts at Jackson Women’s Health, the last abortion clinic in Mississippi, call themselves “defenders” because of the large crowds of protesters they usually face down. A clinic worker and escort there, Derenda Hancock, tells Mic that when it comes to anti-abortion activists, “we’ve let them get too comfortable.” Instead of the non-engagement strategy many clinics across the United States subscribe to, Alabama Women’s Center and Jackson Women’s Health are pushing back and trying to reclaim space around the clinics.

Kim Gibson is a Mississippi native and escort at Jackson Women’s Health. Gibson tells Mic that the mentality for escorts is always “patients first.” But after patients are safely inside, her strategy pivots. “You make them uncomfortable,” she says of protesters. “Whatever needs to be done. Make fun of them. Just make sure there’s no welcome mat. Why should they be made comfortable sitting there and harassing patients?”

Hancock says that in 2013, the Feminist Majority Foundation held an escort safety training for the Jackson clinic that focused on non-engagement. Hancock thought, “We’re having to stand here and have these people screaming at us?”

Shortly after the training, Diane Derzis, the owner of Jackson Women’s Health, came to visit the clinic and “let the [protesters] have it” on her way in. Hancock, who was working that day, recounts, “Diane basically said her property, her rules. From that day on, we engaged.”

Hancock and the escorts started making their own noise. In the early days, she says, “there wasn’t really any training for this. We got portable radios to carry with us from the car to the [clinic] door, and everything evolved from that.” The escorts in Jackson still play music, but they also now talk with protesters, yell back, and distract them from screaming into the clinic.

Hancock and Gibson share videos of their interactions with protesters on the Pinkhouse Defenders Facebook page. The two also created We Engage, an organization focused on changing the culture around abortion services and pushing back on anti-abortion protesters. The group’s website connects the protesters’ presence to a larger cultural stigma around abortion and calls on volunteers and clinic escorts to “take back the sidewalks.”

Hancock says she’s had conversations with protesters she describes as “extremely productive.” Over the years, she says, she’s cited specific Bible verses in Numbers, collectively known as the Ordeal of the Bitter Water, that may describe an abortion, and asked protesters to reconcile that with their religious belief that abortion is a sin. She’s also asked them directly about birth control.

Gibson, meanwhile, thinks there’s value to interacting with protesters, even when the engagement doesn’t change their minds. She points to how she learned earlier this summer that a family of protesters would be vacationing, and likely protesting, up in Michigan in August. “Without engagement, that intel never happens,” Gibson says.

“For years, it was us and Huntsville [doing this work],” Hancock says. Both are independent clinics, which provide the majority of abortion care in the United States. However, they lack the prominence and fundraising abilities of larger organizations like Planned Parenthood.

Planned Parenthood Federation of America, or PPFA, is often the face of reproductive health in American politics. According to a PPFA spokesperson, the organization has no “codified policy” on engaging with protesters, but does recommend escorts and clinic workers not engage due to “security concerns.”

Iris Riis, then the media specialist at Planned Parenthood Wisconsin, told Cosmopolitan in 2017 that “counterprotests can create increased tension for our patients and staff.” Instead, she asked counterprotesters to focus on showing support at events like rallies in front of the state capitol.

Occasionally, a counterprotest does take place outside a clinic. In the past month, a number of counterprotests specifically took place outside a Planned Parenthood location in Atlanta. When the pandemic brought stay-at-home orders to the city, the Moreland Avenue clinic saw an increase in anti-abortion protesters — just around the corner from a strip of popular bars and restaurants in East Atlanta Village, according to Staci Fox, the president of Planned Parenthood Southeast.

Fox tells Mic that community members took it upon themselves to respond, coming out with pink umbrellas to block protesters and their signs. They organized a show of support for patients, and a challenge to protesters’ ownership of the sidewalk. Fox stresses that the clinic is allowing counterprotesters on its property, but does not participate in any planning of the rallies.

Escorts in Huntsville, too, worry about their safety. A number mentioned feeling threatened by protesters’ behavior. White says she might not be as bold if she was within “fist-range,” hinting at protesters becoming physical.

But despite the threats and yelling, White says she is happy to keep sparring with anti-abortion protesters. Ultimately, she sees it as a way to protect patients. “If we can take the verbal pressure off the patient being screamed at,” she says, “we [escorts] will take it on ourselves.”

More like this
More than 200 GOP lawmakers asked the Supreme Court to overturn Roe v. Wade
By Rafi Schwartz
Should public transit be free?
By Andy Crump
Sarah Sanders is here for the vaccine — as long as she can credit Trump for it
By Vanessa Taylor
Stay up to date