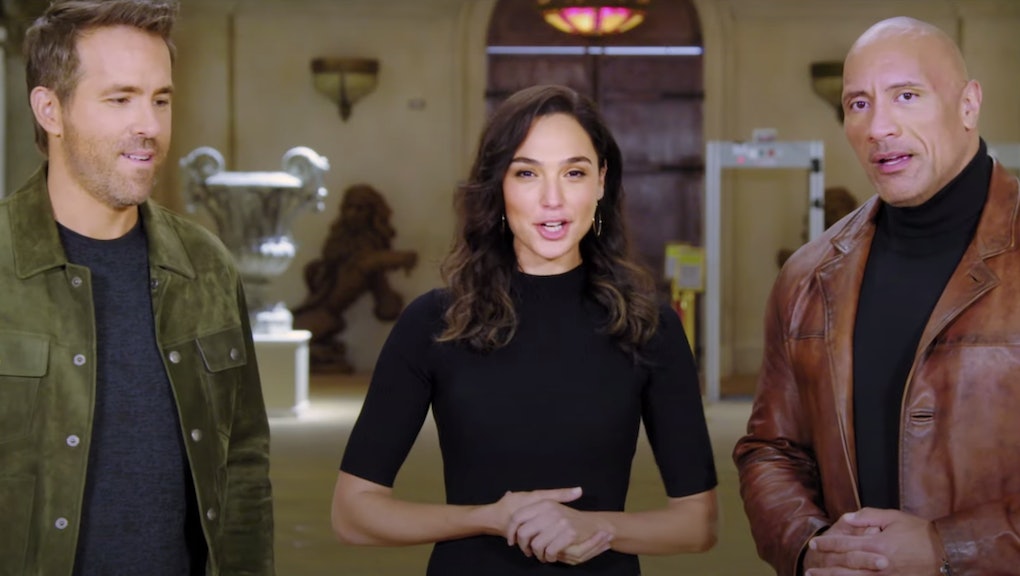 The pandemic may have seismically disrupted moviegoing, but business is booming for the world’s largest streaming service. Netflix’s ability to keep releasing buzzy films and franchises has been mostly unhampered by the ongoing health crisis. Case in point: the platform is making good on its promise to release new movies every week in 2021, and its slate is impressive.

“What I love about movies is they can make you feel every emotion,” Regina King said, teasing her Western The Harder They Fall, which also stars Idris Elba and Lovecraft Country’s Jonathan Majors.

“I love showing people what a superhero can look like,” quipped Octavia Spencer, of her new film Thunder Force. “I like making any movie where I get to throw stuff,” added McCarthy, her co-star.

Halle Berry and Lin-Manuel Miranda are each making their directorial debuts for Netflix. She helmed an MMA drama titled Bruised, which screened as a work-in-progress at the Toronto Film Festival and landed a multi-million dollar distribution deal with the streamer. He adapted Jonathan Larson’s musical Tick, Tick… Boom! into a feature film starring Andrew Garfield.

The list of buzzy projects goes on: Amy Adams stars in a thriller called The Woman in the Window. Gadot, Reynolds, and Johnson teamed up for a big-budget heist film titled Red Notice. Hemsworth is in a slick-looking flick called Escape from Spiderhead, based on a George Saunders short story, in which the actor drives a speedboat.

Jennifer Garner made a kids’ movie called Yes Day, which includes a scene where a family drives through a carwash with the windows down. Zany! Netflix’s slate also includes the culmination of a couple of homegrown, super-popular franchises: To All the Boys I’ve Loved Before and The Kissing Booth.

Netflix’s massive movie push — there are 71 titles across all genres programmed for 2021 — comes at a moment when competitors in the streaming space are battling for eyeballs (and thus subscription dollars). Famously, Warner Bros. announced that its entire 2021 movie slate would debut on HBO Max and in cinemas simultaneously. Notably, that decision has spurred all sorts of backlash and hand-wringing about the death of movie theaters. But as Netflix’s film announcement today makes clear, the services positioned to nimbly navigate this unprecedented moment in history are the ones most likely to reign in the future.

The full slate is below:

A Castle for Christmas

Afterlife of the Party

Army of the Dead

A Winter’s Tale from Shaun the Sheep**

Back to the Outback

No One Gets Out Alive

Outside the Wire (January 15)

The Hand of God*

The Harder They Fall

The Last Letter from Your Lover**

The Power of the Dog

There’s Someone Inside Your House

The Woman in the Window

To All The Boys: Always and Forever

Trollhunters: Rise of the Titans

More like this
You can feel for Khloé Kardashian and also recognize she's part of the problem
By Kara Weisenstein
'Exterminate All the Brutes' is a messy, ambitious documentary that ties together genocide, white supremacy, colonialism ... and Josh Hartnett?
By Nicholas Russell
'The Nevers' will be so much better when Joss Whedon has nothing to do with it
By Kara Weisenstein
Stay up to date