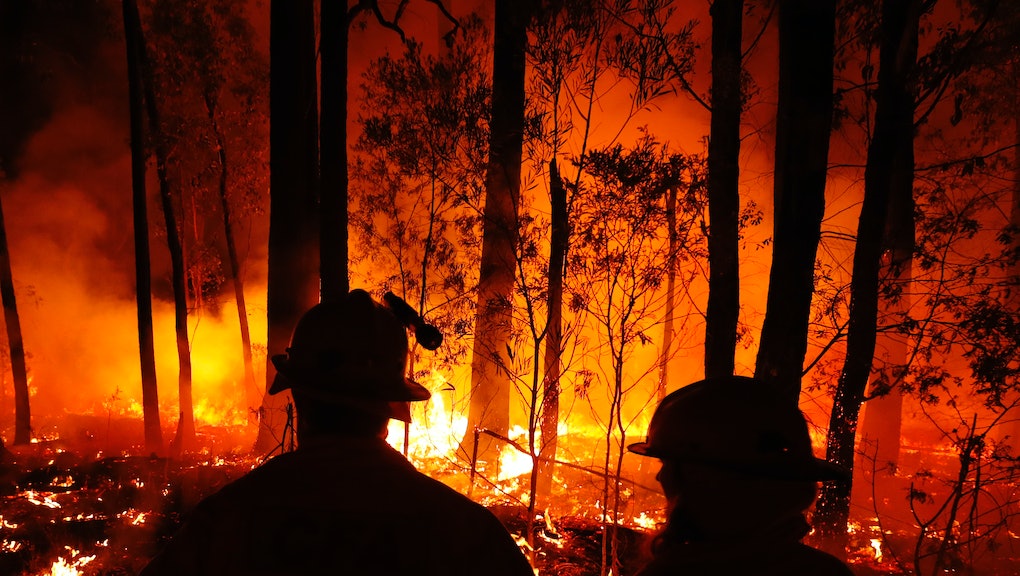 For months now, Australia has been experiencing devastating bush fires that have spread to nearly every region of the continent. But despite the growing tallies of damages and deaths as a result of the ongoing disaster, it took the Australian government weeks to adequately respond to the situation, failing to provide sufficient funding for fire services and declare a state of emergency in order to focus efforts on fighting the flames. While the government had sputtered into action, a perhaps unexpected force for good has stepped up: sex workers and models. Leveraging their online presences, they have rallied their followers and raised hundreds of thousands of dollars to help with fire relief efforts in Australia — all by offering nudes photos of themselves in exchange for donations.

The movement was started by Kaylen Ward, a 20-year-old model and star on Instagram and OnlyFans — a subscription service that allows adult models and performers to make money in exchange for photos, videos and other content. On January 3, Ward posted on Twitter to tell her followers that she would send a nude photo to anyone who donates $10 to any number of charities that would help the victims of the Australia bush fires. Horny but helpful followers were tasked with donating cash, taking a screenshot of their receipt and sending it to Ward. In exchange, she offered them a naked photo of herself. Despite dealing with attempts to produce fake receipts from people trying to scam her out of a picture without making a donation, within a matter of just a few hours Ward announced that she and her followers raised more than $7,000 for the cause. On January 6, she said that she broke the $1 million mark. "I raised [$1 million] for Australia at the sake of my naked body being exposed on the internet to millions and millions of people," she wrote on Twitter. "That’s a scary feeling to be that vulnerable and exposed to the world. But I did it because I wanted to do something good."

Ward's efforts have since been redoubled by other models, who have borrowed the concept and offered nudes photos of themselves in exchange for a $10 donation. OnlyFans model Emmy Elliot claimed to have responded to 5,000 donations thus far, meaning she's raised at least $50,000. Instagram and adult model Jenna Lee reported raising $40,000. Vancouver-based sex worker Katie Day joined the fray as well, and informed The Guardian that she raised at least $1,000 in less than 24 hours.

The efforts have not come without a cost for the sex workers and models who have decided to expose themselves for a good cause. Going through the donations has been a time-consuming process for all parties — it got to be such an effort that Ward said she had to recruit people to help her sift through donations and verify them before sending out pictures. There has been fallout from the effort, as well. Ward had her Instagram account disabled for offering nude photos. Other models have also faced scrutiny because of the donations program, as both Facebook and Instagram have notoriously harsh policies toward sex workers and people who want to share photos their bodies online. Ward told The Guardian that people have attempted to impersonate her online and steal her identity and a group of obsessive followers have started digging into her history in an effort to find dirt on her. She also tweeted, "my family disowned me, and the guy I like won’t talk to me all because of that tweet." Despite some of the negativity that has followed the effort, Ward has pushed forward: "Fuck it, save the koalas," she concluded.

The efforts from sex workers, adult performers and models may be unconventional but shouldn't be dismissed. The money raised will provide much needed relief for the victims of the fires who have unfortunately been underserved by their government. New South Wales, which has been particularly devastated by the fires, saw its fire and rescue budget cut by $12.9 million in the lead up to the bush fire fiasco despite evidence to suggest that conditions would be ripe for destructive flames due to ongoing droughts and record levels of heat.

According to independent Australian publication Crikey, the significant dip in funding for fire services could have paid the salaries of nearly 500 firefighters, purchased 70 firetrucks and thousands of pieces of equipment that could be used to help defuse the fires. In addition to the funding cut, leadership in Australia has seemed asleep at the wheel during much of the crisis. While early bush fires started as far back as June of 2019, it took until January 2020 for New South Wales Premier Gladys Berejiklian to declare a state of emergency in the region. When two volunteer firefighters died while attempting to extinguish the blaze, Australian Prime Minister Scott Morrison was vacationing in Hawaii. He has since become the subject of ire among Australians, many of whom believe Morrison and his political party have failed to adequately address the crisis. While touring the country and meeting with victims of the fires, Morrison has been heckled by citizens, faced embarrassing moments where people have rejected his handshake during photo opportunities and met with demands for additional funding to fire services in order to address the emergency.

While Australia's government appears to be taking the issue seriously now, much of the damage has already been done across the continent. It is estimated that as many as 21 million acres of land have gone up in flames during the months-long bush fires and as many as 2,500 buildings — including 1,900 homes — have been destroyed. At least 25 people have lost their lives due to the fires. The disaster has been particularly devastating to wildlife across Australia, as an estimated 500 million animals have died due to the flames. Those figures are expected to continue climbing, as Australia is just entering its summer season and temperatures are expected to continue to rise.

How you can help

If you are looking for ways to contribute to relief efforts in Australia, there are plenty of ways to go about doing so — whether you'd like to receive a nude photo in exchange for your donation or not. The Australian Red Cross Disaster Relief and Recovery is offering emergency assistance to communities affected by the fires. The St. Vincent de Paul Society is helping victims of the fires find housing solutions and providing goods for those displaced by the flames. Foodbank is taking donations to provide sustenance to people in need. WIRES and the World Wildlife Fund are helping to rescue and rehabilitate animals affected by the fires. Vets Beyond Borders is active in the region to help provide medical care for animals. You can donate directly to firefighters through the Country Fire Authority (CFA) or Rural Fire Service.

More like this
Plastic Free July is the perfect opportunity to kick our pandemic habits
By AJ Dellinger
New York City's flooded subways are a preview of the hell to come
By AJ Dellinger
Amid daily reports of catastrophe, Americans are finally starting to realize climate change is bad
By AJ Dellinger
Stay up to date