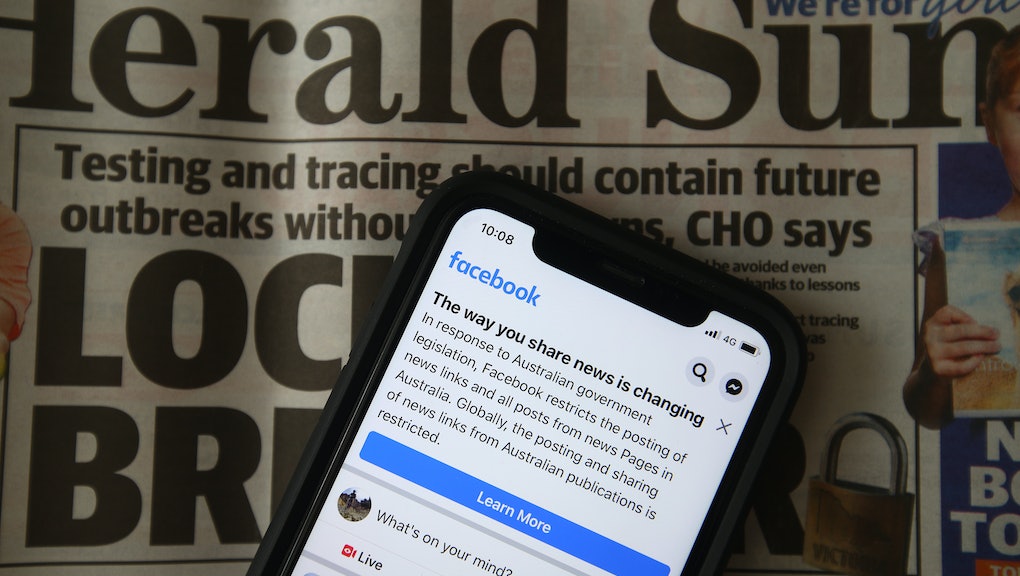 This week, Facebook in Australia looked dramatically different than it ever has before. While the company has a history of tweaking the colors or layout of its news feed, the change this time was due to a much more drastic and unprecedented step: It blocked all news content. Residents of Australia can no longer view, comment on, or share news content from local or international publishers.

Facebook's ban on news is not an attempt to stop disinformation, which has continued to permeate across the platform. Instead, it amounts to something more of a hissy fit. Australian politicians have proposed a new law, the News Media Bargaining Code, that would require companies like Facebook and Google to pay media publishers for the right to have their content on their respective platforms.

The law is deeply flawed (more on that shortly), but it strikes at a very real problem: Publishers have been seeing their revenues shrink for years as platforms like Facebook dominate the ad space that newspapers and online publishers once relied upon. Instead of reckoning with that, Facebook has decided to take its ball and go home. While it may simply be a case of drastic times calling for drastic measures, it certainly does not bode well for other countries looking to similarly rein in Facebook's worst behaviors with additional regulation.

What is the News Media Bargaining Code?

Last year, the Australian government began drafting a new law that would seek to help local news publishers recoup revenue that had been lost in the shift to digital media. The News Media Bargaining Code is the result, crafted by the Australian Competition and Consumer Commission.

The proposed law would require platforms like Facebook and Google to determine how much revenue they generate by the presence of content from news publishers, and then pay a portion of that revenue to the publishing companies. The basic premise is that social networks and search engines benefit from the content that these publishers produce, because users visit those platforms specifically for that content, so why shouldn't the creators get a cut?

The law would also require publishers to get a heads up a month in advance before any changes to the platforms' algorithms are made. Arbitrary changes of Google's and Facebook's algorithms have been known to wreak havoc on publishers, who can see massive changes in engagement and audience with little clarity as to what changed and why.

On the surface, this may all seem well and good. Facebook and Google dominate the advertising space and rely on people engaging with or searching for content from publishers in order to make money from those ads. Meanwhile, publishers have poured money into their presence on these platforms and seen little actual return in revenue. The News Media Bargaining Code would help to close that gap.

The problem is the News Media Bargaining Code is not exactly as it seems. Small publishers have expressed concerns that the law does not extend to them, excluding them from revenue-sharing agreements. It's no surprise, then, that the biggest publishers in the country have been the ones pushing hardest for the law to pass. News Corp, which is owned by Fox News founder and right-wing media magnate Rupert Murdoch, has been actively lobbying for the law and stands to make hundreds of millions of dollars if it passes. The law would not require those major corporations to reinvest that money in their actual reporting operations.

In other words: The News Media Bargaining Code could simply line the pockets of news executives, who are frankly doing just fine, while companies continue to lay off employees by the dozens to cut costs.

Evan Greer, Deputy Director of the nonprofit digital rights advocacy group Fight for the Future, tells Mic that Australia's law is "incompatible with the open Internet." Sir Tim Berners-Lee, the inventor of the World Wide Web, agrees. He told Australia's Parliamentary committee that the News Media Bargaining Code "risks breaching a fundamental principle of the web" by undermining the ability to freely link to content.

This is a very simple but essential part of the open Internet: the idea that you do not have to pay to simply share content. By charging via revenue-sharing for content, the law would violate that lynchpin of the modern web.

The News Media Bargaining Code is a flawed and potentially untenable solution to the very real problem that media companies face with the growing influence of digital platforms. But Facebook's response to the law manages to ensure that this is a fight with no real heroes to root for. While Google hedged its bets with the proposed law by cutting a deal with Australia's largest publishers, News Corp and Seven West Media, Facebook opted to go scorched earth and block all news from being shared on its platform in Australia.

The block was intended to essentially wipe all posts from news publications, both local and international, from the platform. Australians looking for stories from their favorite or most trusted publications would find the links missing when visiting the publisher's page.

In typical Facebook fashion, the company severely botched the rollout and created a ridiculous amount of collateral damage.

Of course, in typical Facebook fashion, the company severely botched the rollout and created a ridiculous amount of collateral damage. Pages belonging to the Bureau of Meteorology and state health departments, for example, which provide essential information about the ongoing coronavirus pandemic, were caught up in the ban and unable to share information. Facebook even managed to ban its own Facebook page from sharing information.

"In the middle of a pandemic — one that's been exacerbated by social media giants' proliferation of conspiracy theories and health misinformation — Facebook has decided they'd rather block their 17 million Australian users from accessing authoritative news on the platform than share ad revenue with publishers," Jesse Lehrich, co-founder of the nonprofit advocacy group Accountable Tech, tells Mic.

Lehrich argues that whether the law is a good one or not, now is not the time for Facebook to enter into a petty squabble like this. "Even if [Facebook has] qualms about the nuances of the bill and the global precedent it may set, this was the worst possible way to respond — and yet entirely consistent with their ethos, which continues to be growth at any cost."

What does this mean for other countries seeking to regulate Facebook?

Facebook's temper tantrum is extra troubling because Australia is not the only country that is applying new scrutiny to the company. Laws similar to the News Media Bargaining Code have been proposed in Canada and the European Union. Microsoft President Brad Smith has advocated for similar regulations in the U.S. — though it's worth noting that as one of the biggest competitors to Facebook and Google in the digital ad space, Microsoft has a vested interest in legislation that targets the big guys.

It's possible that facing a true international effort, Facebook may acquiesce and seek some slightly more agreeable solution that will satisfy regulators and publishers. But its refusal to engage in Australia suggests that the company may go a different route: It may view itself as so essential and publishers so inconsequential that it could pursue the nuclear option.

We saw Uber take a similar approach last year. Faced with new regulations in California that would require more pay and benefits for Uber drivers, the company leveraged its platform to spread propaganda and encourage people to vote down the regulation. It worked because Uber controlled the platform and the spread of information.

Facebook could take a similar approach. But the scale would be much larger — and the consequences even more dire.

More like this
Why is Facebook this confused over letting Donald Trump back?
By Rafi Schwartz
The ethics of solar power are more complicated than you think
By Vanessa Taylor
He made a cryptocurrency called SCAM. Now he's trying to make it legit
By AJ Dellinger
Stay up to date