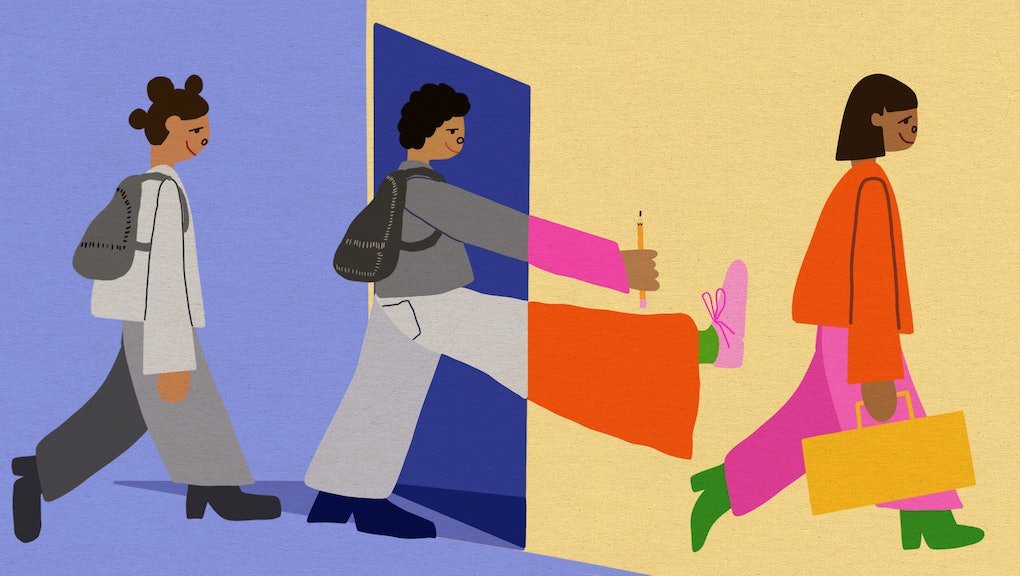 Back-to-school usually means a fresh start. What does that even look like this year?

Back-to-school season has always been steeped in cultural lore. It’s a chance for reinvention after a summer spent doing what’s considered a hallmark of coming-of-age: changing. Back-to-school is like a new year, but instead of confetti poppers and countdown clocks, it’s number two pencils and reusable water bottles. As students prepare to head back to classrooms—or Zoom squares, as mask mandates in K-12 schools are on a state-by-state basis—the chaos of modern young adulthood in 2021 begs a more fundamental question for the season. What does it feel like to present a new you at this moment?

“The biggest difference about myself is that I realized that I’m genderfluid,” says 17-year-old Miri Feigin, who is entering their senior year of high school in North Carolina. “I use a new name and pronouns, which I am anxious about and also excited to debut at school.” Over the past year and a half of virtual school, Miri says they’ve read more, including Women, Race, and Class and Abolition Democracy by Angela Davis, which caused them to have an enormous political shift to the left. “Instead of measuring how much I’ve changed over the summer, going back to school will be a measure of how much we’ve changed over the past year and a half,” Miri says of their generation.

Sitting side by side on a couch via Zoom, friends Taylor Richardson, 18, and Jakhye Wilkins, 17, talk about the number of new faces at their school, since, technically, because of virtual school last year, both the sophomore and freshman classes are new. The seniors from Jacksonville, Florida, say they’ve never met some of the teachers they had last year.

“There was no back-to-school season,” Jakhye says of the 2020 school year. And this year, Taylor wasn’t as prepared for back-to-school like she usually is. Taylor describes how she “didn’t have a fresh fit for the first day. No pencils, no paper. I barely had a binder and a backpack.” It’s hard to make a plan when everything’s still in flux. Some students are vaccinated, some aren’t; some are wearing masks, and some are going without. You’re “trying to get an education and act normal when things are changing all around you,” Taylor says.

“I think a lot of people very easily forget what it’s like to be younger,” says Jakhye. He doesn’t remember what it’s like to be 14, he explains. “My life right now reminds me of the first time driving,” he says. “You’re really excited because you’re learning how to drive, and you’re learning to do something new. But also, you could crash and burn.”

Because young adulthood is often billed as an essential window for change, there remains a persistent myth that the reason teenage self-discoveries exist is that “real life” hasn’t yet begun. But young adults don’t operate separately from real-life pressures, including safety, economic instability, and a diminishing social safety net. In reality, those pressures drive the access to experience that young people can experiment with.

Young adults have been “historically overlooked” in terms of the social safety net, despite coming of age against a backdrop of endless war, economic instability, school shootings, systemic inequity, and a world ravaged by climate change.

“Adolescence and emerging adulthood are viewed as times of changes, opportunities, exploring identities,” says Bernadette Sánchez, Ph.D., Professor of Educational Psychology at the University of Illinois at Chicago. But not everyone has the opportunity to do that.

Much of the research around identity exploration in young adulthood has centered on white, middle-class young adults. It leaves out those who need to get jobs immediately to help pay bills, caregivers or parents themselves, and those without resources to experiment with unpaid internships or find themselves through exploration like travel.

Because young adulthood is often billed as an essential window for change, there remains a persistent myth that the reason teenage self-discoveries exist is that 'real life' hasn’t yet begun.

Before the pandemic, Sánchez examined the role that family and economic circumstances had on the behavior of low-income, urban Latino young people as they transitioned out of high school. For the young people interviewed in the study, exploring various identities, interests, and possibilities, and delaying adulthood as they sought to find themselves, was a luxury, not a given. Instead, they focused on working to pay bills, helping out their families. If they pursued additional school, they were often in school part-time or otherwise thinking practically about their futures. “In the ideal world, they would have the chance to do those things. But they didn’t have that,” Sánchez adds.

“In high school, I always looked at the back-to-school season as a fresh start,” says A’ja Ross, 27. She remembers laying out her new clothes to match her shoes. After earning her associate’s degree from a community college, she’s preparing for the first year of her bachelor’s degree in business administration from Bowie State University in Maryland. “Going back to school now, I feel a sense of anxiety,” she says. She’s nervous about transferring, and she’s also nervous for her son, who didn’t cope well with virtual learning.

When asked about points of young adulthood where she’s been able to experiment, Ross points to Generation Hope, an organization providing direct support to parenting students and their children through two-generation programming, taking her on a college tour to George Mason University in 2018. Ross got pregnant in ninth grade and had already been juggling parenting and community college. At the time, she thought getting an associate’s degree was as far as she’d be able to go. Though Generation Hope provided her with a scholarship and assisted when she couldn’t make a car payment or needed gas money, parts of Ross’s community college experience were still hard, including a period of homelessness that took a toll on her academically. As for a four-year college, she didn’t see how it was possible.

But the opportunity to imagine a different version of herself, a new future, coupled with the support of her Generation Hope mentors, made Ross curious about pursuing a four-year degree. “It even inspired my son to want to go to college after the George Mason trip,” she says.

The idea of back-to-school as a time of transition, change, and self-exploration doesn’t feel true to all young people. Delia Raining is a thirteen-year-old heading into eighth grade in Pennsylvania and thinks it’s an “outdated myth” that you show up after summer break transformed.

“People change so gradually over time that you can’t go to school and be like wow, that person has matured,” Delia explains. Since the pandemic began, she doesn’t enjoy socializing as much as she used to, instead painting and savoring her alone time. The back-to-school changes she would like to see regarding young adults are more structural than personal. Delia wishes to change the school system; in particular, she thinks there is too much emphasis and pressure on homework and standardized tests. Though she has great teachers that care about her, she says she knows not everyone does.

“I just feel powerless growing up in this world,” she says. Since Delia can’t vote for three more years, she doesn’t feel she has a voice right now in society. She thinks that she—and her generation—will have significant problems heaped onto them once they’re older. “Adults never really respect us,” she says.

The back-to-school transformation is more about respect, community, and a profound interrogation of young people’s roles in the world. During the four years Chi Adi, 18, attended at their predominantly white college preparatory boarding school in Massachusetts, they were struck by how few avenues there were for Black people to be comfortable. “I’ve been forced to exist in spaces that were actively harmful towards me,” they add.

Chi recently moved to New York to begin college and prioritized getting an off-campus apartment where their community of friends, who are fellow queer and trans creatives, can gather safely. In her studies as a gender and sexuality major and film minor, she has been focused on showing Black queer and Black trans people in “uplifting narratives,” something she described never getting to see in movies in high school.

"I can’t remember a time when my mind wasn’t changing a little bit every day. I think the last few years have shown me how many lives are worth living.”

Every year, Chi would do a style revamp, changing her look depending on the type of vibe they were going for. “For this particular year, my approach has been less rooted in material things like clothes and shoes and more so just like, how am I going to create a network that can bring the healing and the solace that my communities need at this moment in time?”

Elle Ray, 18, was a high school junior when the pandemic began. Now, she’s about to enter her first year of college, which means, among other things, feeling comfortable using multiple sets of pronouns. It was something they didn’t think about as an option for themself until they saw Zoom names with “she/they” in college information webinars and poetry workshops. They gave themselves a new middle name to express themselves more fully and create personal and professional social media separation. “I was really inspired by the radical autonomy of naming yourself,” they add.

Elle (who is using a pseudonym) grew up in a Texas city that is predominantly Baptist, though she was raised Mormon. “Among Baptists, I felt nervous for them to know I was Mormon, but I felt nervous around almost everyone for people to know I was queer,” she explains. Over the past year, Elle experimented with “queer Mormon and Mormon-adjacent friends”, creating their own church Zoom meetings. She participated in a Judaism 101 class, hopes to try out attending synagogue in college, and has been learning more about the spiritual transitions of her Kanaka Maoli ancestors, given that her great-grandmother and grandfather are Native Hawaiian.

While there have been significant changes in Elle's life this year, she says she “can’t remember a time when my mind wasn’t changing a little bit every day.” Plus, Elle explains, “I think the last few years have shown me how many lives are worth living.”

For some young adults, back-to-school is an opportunity to reframe their lives, test out new friendships and relationships, new ways of dressing, and new interests, in the company of peers who were doing a version of the same thing. But school has never been a safe place for all young people to show up fully as themselves. Some students I talked to described areas outside of school where they felt safer experimenting with new facets of themselves, like going to therapy, participating in TikTok trends, or gathering in communities who share lived experiences. There are no one-size-fits-all means of discovering yourself anymore—and really, there never was.

“I don’t remember a time when the world wasn’t moving at the speed of light,” Elle tells me. There is no “normal” to compare this back-to-school season to; there is no pure euphoria of a fresh start amid so much uncertainty and mounting expectations to define your life and self on a specific timeline. “I am aggressively raising and lowering and then raising and lowering my expectations,” says Elle. “I wonder how long this can last.”