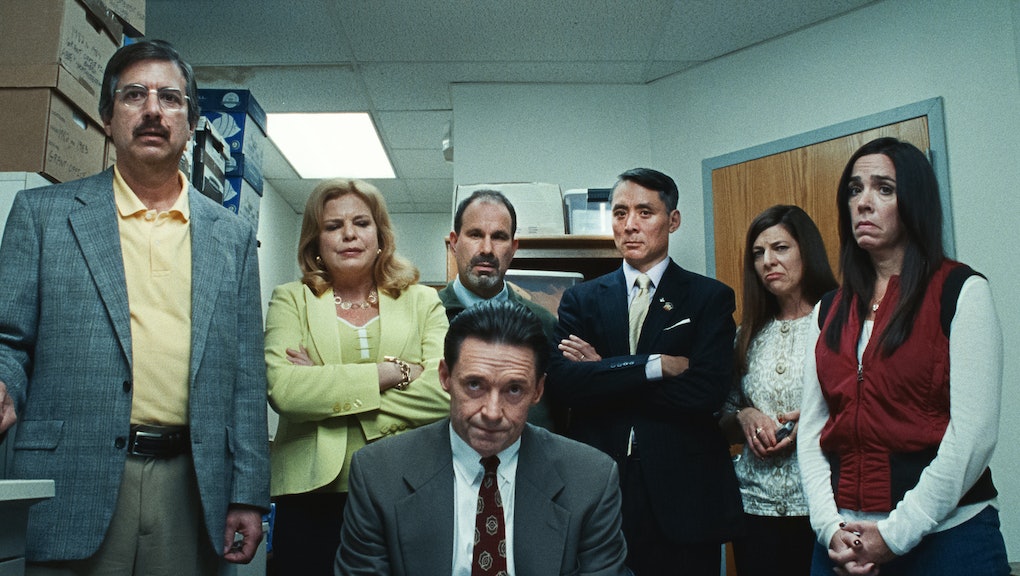 There’s an early moment in HBO’s crackling new drama film, Bad Education, that reveals the codependency at its core. After Roslyn School District’s assistant superintendent Pam Gluckin (Allison Janney) has been implicated in fraud of untold proportions, her co-conspirator and district superintendent (Hugh Jackman) tries to limit the damage. Jackman’s Frank Tassone convinces other administrators that if the district comes under scrutiny from law enforcement, their budgets will crumble, their students will no longer be guaranteed a pipeline into elite colleges, and property values will crater. In this moment, his house of cards appears to have a sturdy, highly intermingled foundation.

Focusing on the embezzlement scandal that rocked a Long Island public school district in 2002 and netted a pair of administrators $11.2 million, Bad Education examines how the entire community can not only fall victim to systemic rot, but requires it to maintain the facade of upward mobility. The film from Thoroughbreds director Cory Finley and writer Mike Makowsky — who was a Roslyn middle school student when Tassone was arrested — retains most of the details from the true story, changing a few names around and creating some characters to streamline the drama.

Jackman is the magnetic center of this, pursuing uncharted territory beyond the gruff, carpet-chested Wolverine and bombastic showmanship that have defined his career. Tassone is a charismatic, integrated presence in his schools. He forms closer relationships with his community than the average superintendent, sitting in on classes and attending book clubs with parents. His wealth manifests in plain sight, with a suspicious suit collection, cologne, and a face lift reflecting resources beyond a public servant’s salary. That he also lives as a closeted gay man with a decades-long partnership kept private from his colleagues, and a Las Vegas-based lover private from him, grounds Tassone in more pained interiority than most financial true crime flicks often afford.

When student reporter Rachel Bhargava (Geraldine Viswanathan) stops by Tassone’s office for a fluffy quote about the school’s pricy “Skywalk” construction project, he gives her a bit of advice that plants the seed for his undoing: “it’s only a puff piece if you let it be a puff piece.” She runs with the tip against the wishes of her editor, who wants to stay out of administration’s way and use the paper to pad out his resume. Rachel finds some incongruity in the school’s public records, the massive price tag for Skywalk, and the administration’s leaky copy room ceiling. With the help of her father, who also isn’t immune to the fallout of their community’s greed, Rachel becomes a judicious reporter, leading her right to Tassone’s doorstep in one pivotal scene.

Like with any elaborate scheme hanging by a broad network of threads, the Roslyn embezzlement case starts to unspool thanks to a clumsy peripheral character. We meet Pam’s son James (Jimmy Tatro) as he works on renovations to her Westhampton beach house, letting several feet of tape measure fall off the deck and tiles whiff out of his pickup truck’s bed. The scheme unravels much like the real life story, with a hardware employee noticing the school company card for an exorbitant shopping spree of home improvements. When Pam returns home to James, she inflicts the antipathy of an Uncut Gems supporting character on her son.

Pam’s ousting is the height of Bad Education’s powers, with Jackman foregrounded in front of the oblivious administrative team. Janney nails the incredulity here, once Tassone tells his co-conspirator to pay back the money, resign at the end of the week, and blames an unfounded mental illness. Only with his eyes, Jackman establishes the power dynamic, effectively gaslighting Pam and tilting her in the direction of self-sacrifice. There’s no excuse, she comes to concede. “Well, the sociopathy,” says the school board president played by Ray Romano, who’s become an indispensable character actor.

Unlike recent scam explainers The Big Short or The Laundromat, Finley’s direction doesn’t attempt to trivialize or lean too heavily into the farcical. Credit this to the comparatively small stakes at hand here — $11.2 million is quaint compared to the billions vultured leading up to the 2008 financial crisis — or that he trusts the viewer to keep up with its limited scope without resorting to smarmy fourth wall breaks. Finley instead strikes the perfect tonal balance, affording the right amount of heft and empathy to the central culprits without letting them off easily.

The school administrator subgenre is definitely a sparser category than teen high school films, but Finley does an admirable job of finding strange accents to such a mundane setting. Italicized posters touting the virtues of Success, Respect, Teamwork, and Learning hang above the doorway, leading into the copy room with a leaky ceiling. Finley’s also an understated master of suspense, proving that dread can outweigh violence, and a minimalist score oscillating between one or two notes don’t need to be contained by genre.

The film evades some of the simple lingering questions, when there are countless other communities with similar networks of garish wealth, power, and prestige. Why these people? Why here? If anything, Finley and Makowsky stop short of spoon feeding these resolutions, and arrive at something more universal. “If I wanted the money, I would’ve gone to Wall Street...but I wanted to make a difference,” Tassone says late in the film, at the end of his rope. This sort of deluded altruism pervades Bad Education, suggesting that maintaining their corruption was crucial to the school’s standing once they were in too deep. The irrepressibly broken systems that paid for Tassone’s face lift and Gluckin’s beach house will always continue to endure, even if they don’t.

More like this
Hulu’s ‘Plan B’ is an empathetic, insightful evolution of the teen sex comedy
By Brandon Yu
10 sports documentaries to get you fired up ahead of the Olympics
By Emma Sarran Webster
Ellie Kemper apologizes for attending “racist, sexist, elitist” Veiled Prophet Ball
By Tim Brinkhof
Stay up to date