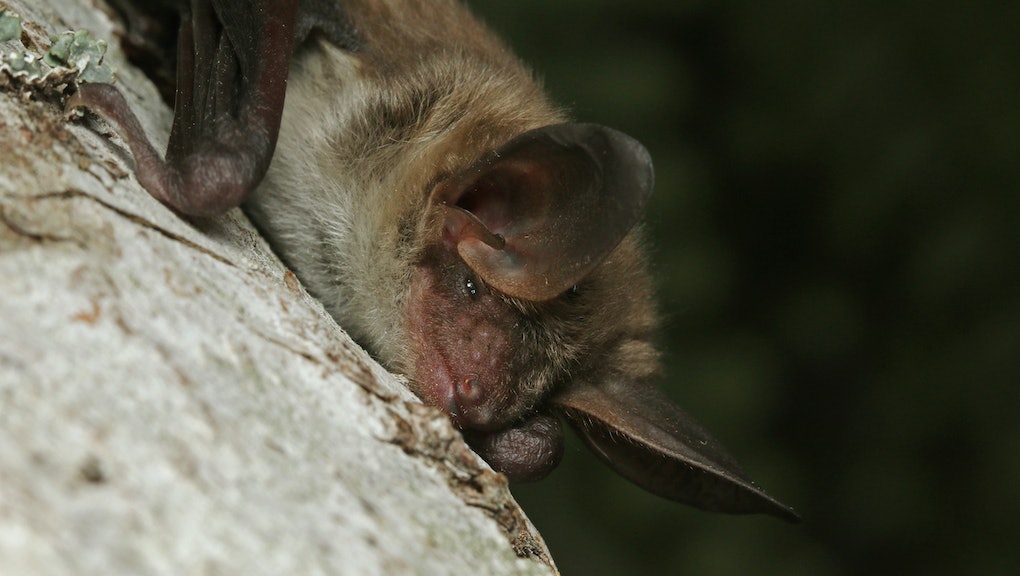 Bats use leaves like mirrors to find their prey, scientists discover

Researchers with the Smithsonian Tropical Research Institute (STRI) have discovered a neat little echolocation trick bats use to catch any motionless insects. Basically, while flying, bats are using the leaves around them as mirrors to find their food. The bats are approaching leaves at an angle, using the surface to bounce their echolocation off it like an "acoustic mirror," and detecting the location of their prey by what bounces back.

According to the Smithsonian Magazine, Inga Geipel and her team of biologists narrowed their focus on the common big-eared bat, and created an enclosure that mimicked the tiny bat's natural habitat. The setup was simple: It was, essentially, a flight cage with artificial leaves, a dragonfly as bait, and a camera.

She and the other scientists spent sleepless nights watching and observing what happened when a hungry bat was released in the pen. They were startled to realize the bats were approaching leaves at an angle to find their food.

"For many years it was thought to be a sensory impossibility for bats to find silent, motionless prey resting on leaves by echolocation alone," said Geipel to Science Daily.

Why did biologists think this was impossible? The answer lies in the nature of echolocation itself. Arizona State University describes echolocation as "the use of sound waves and echoes to determine where objects are in space." This is how bats can find insects in absolute darkness. They focus on the echos that bounce off objects to figure out the location, shape, and size of their target.

But echolocation has its limits. Scientists thought that insects could protect themselves from bats by remaining still among tree leaves. A bat's echolocation would then bounce off the leaf and reflect back as the solid surface of the leaf, hiding the presence of the insect. This is known as "acoustic camouflage."

Geipel's team wanted to understand how bats overcome this sensory camouflage. They learned that when the bats approached the leaves at angles greater than 30 degrees, the leafy surfaces instead acted like mirrors that reflected echoes off the motionless insect bait.

"This study changes our understanding of the potential uses of echolocation," Geipel explained to Science Daily. "It has important implications for the study of predator-prey interactions and for the fields of sensory ecology and evolution."

The predator-prey interactions Geipel referred to involves the evolutionary battle between bats and their favorite food -- moths. The Smithsonian explained that, after so many years of being hunted by bats, moths have evolved various defenses against their predators such as scales that absorb echolocation instead of reflecting echoes that give their location away. Other moths have developed ears that can hear a bat's echolocation, giving them enough warning to run away.

Acoustic camouflage was another technique developed as a defense in this ongoing war of survival between bats and moths. Biologists thought this was very effective, since bats usually hunt flying insects that are out in the open. Without a crowded forest or jungle canopy, a bat's sonar can detect those bugs without confusion.

But bats are clearly fighting back, noted a report by The Conversation, developing different sonar signals so moths can't hear them. Geipel also suspects that the common big-eared bat isn't the only creature that has learned a new hunting strategy. She believes other researchers might find similar reflecting techniques in other bat species that primarily hunt moths.

Learning how bats overcome the shortcomings of their own sonar limitations is a benefit to humans as well. Submarines use sonar, along with other navigational equipment, to detect obstacles while navigating through the dark ocean. Learning from the true echolocation experts, the adorable common big-eared bat, could also help humans learn how to improve their use of sonar technology.