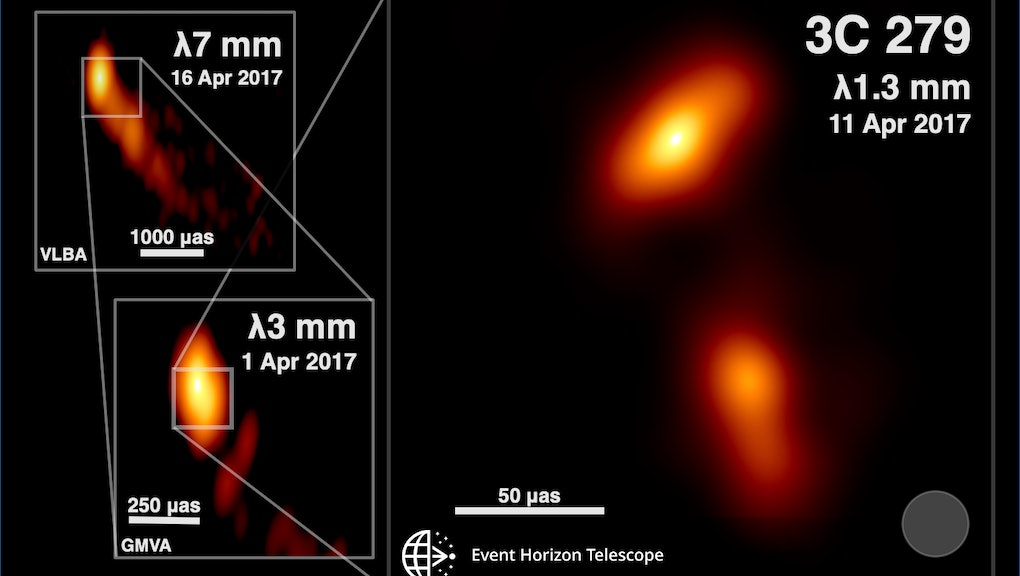 A network of telescopes, collectively called the Event Horizon Telescope (EHT), has become a key player in many space-related discoveries lately. Last year, the EHT helped a team of astronomers capture the first image of a black hole — a feat previously thought nearly impossible because it was assumed that black holes, which have the strength to absorb light, would be too dark to see in space. But the research team, determined to take an image of a black hole surrounded by the bright gasses it draws into its center, managed to improve on previous techniques and use the system of telescopes to take a single picture of an actual black hole.

Since then, scientists have been using these updated methods to take images of other space objects and phenomena. And now, they've hit another big milestone with an image of a black hole spitting a streak of fire 60 light-years in length.

According to a report by The New York Times, the astronomers were looking at a quasar — one of the brightest objects in space, currently theorized to be supermassive black holes that emit an astounding amount of light as they consume anything around them — located about five billion light-years away. The research team focused on this quasar to calibrate their telescope, intending to observe a different black hole later, when their imaging caught the blast of fire-like energy coming from it.

Another team then took these images, collected over a span of four days, and studied them to see how the spurts of energy shoot out from the source. They found a number of surprising discoveries, including one showing the source of the flames looking perpendicular to the actual flames of energy. The researchers were surprised; they didn't expect to see it in that shape.

"This is like finding a very different shape by opening the smallest Matryoshka doll," the head of the team said to the NYT.

The pictures also appeared to indicate that the burst of energy was moving at 20 times the speed of light; though this was, a galaxy-brained astronomer explained to the NYT, an optical illusion created by the angle in which the image was taken.

Sheperd Doeleman, director of the EHT network, told the NYT that the amount of details shown in the images are unprecedented, and that "the results indicate a violent environment" surrounding the black hole. It has also given the EHT team confidence that their system of telescopes is working, and they hope the system will continue to reveal the secrets of more quasars and black holes in the future.