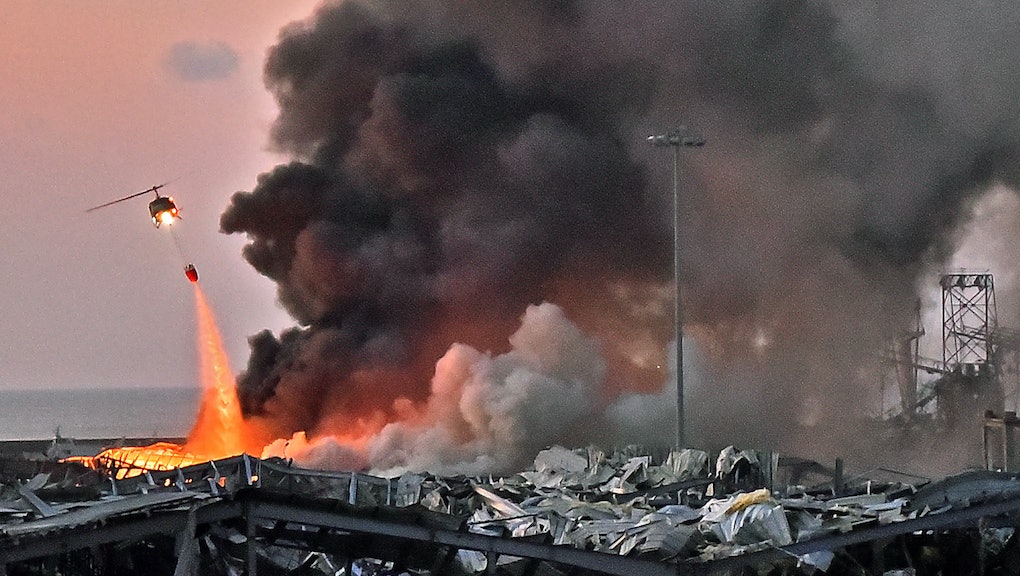 Beirut explosion: What we know so far about the catastrophe in Lebanon

At least 137 people are dead and nearly 5,000 more are injured following Tuesday's massive explosion in Beirut, the capital of Lebanon. Videos the incident posted to social media appear to show two explosions; first, a cloud of smoke rises from a building near the Beirut port, which is quickly followed by much larger explosion, which left a crater more than 400 feet across according to geospatial analysis done by CNN.

The Associated Press reported that even hours after the explosions, ambulances continued to bring injured people to nearby hospitals, most of which were already overloaded with coronavirus patients. The cause of the incident is not yet known, although investigators have begun to focus on a shipment of ammonium nitrate — a highly combustible chemical compound used in both fertilizer as well as explosives — which had reportedly been sitting in a warehouse at the port for six years.

It remains unclear what may have ignited the ammonium nitrate, although Lebanese Prime Minister Hassan Diab seemingly suggested he was open to the possibility that the explosion was not an accident, telling reporters Wednesday that "I will not rest until we find the person responsible for what happened, to hold him accountable and impose the most severe penalties."

However, contrary to President Trump's earlier assertion, offered without evidence, that generals to whom he had spoken "seem to think it was an attack," U.S. Defense Secretary Mark Esper said Wednesday that "most believe that it was an accident, as reported."

Newly released documentation lays out a more detailed theory, claiming that bureaucratic negligence allowed the highly explosive chemical substance to be stored in the port despite warnings of an eventual blast. The Guardian reported that the ammonium nitrate landed in the port city in October 2013 on a Russian ship, which Lebanese port authorities did not allow to depart because they'd deemed the vessel unfit for the sea. Speaking to Russian journalists in 2014, the captain of the ship said, "The cargo is ammonium nitrate. It is an explosive substance. And we’ve been abandoned. We’ve been living for 10 months on a powder keg."

After a year of being held on the Russian boat, workers were allowed to leave, but port authorities kept the ammonium nitrate at a storage facility in the east Beirut port. Reuters found that less than a year after the Russian ship docked, the Lebanese customs department had sent documents to political officials asking for assistance in dealing with the ammonium nitrate, either by coordinating a sale or re-exporting it to a different location. Similar requests were made in 2015, 2016, and 2017. According to an anonymous source who spoke with Reuters, government officials evaluated the facilities just six months ago and noted that the ammonium nitrate had the potential to "blow up all of Beirut."

An "unspecified number" of port officials have been placed under house arrest while a government investigation is conducted, per The Guardian. But protesters in Beirut are calling for an independent investigation, arguing that the authorities who allowed the ammonium nitrate to sit in a warehouse for six years are not fit to uncover who is really responsible for the blast. One political leader, Walid Jumblatt, told The Guardian, "We have no trust at all in this ruling gang."

AJ+ reported Tuesday that all of the hospitals in Beirut were full very shortly after the initial explosion, and The New York Times reported that one hospital was turning patients away. Speaking with reporters Wednesday, Health Minister Hamad Hassan said that hundreds of Beirut residents had reported missing family members, suggesting the death toll will almost certainly rise as officials continue to clear the blast site.

According to Hassan, four of the city's hospitals have been taken offline due to damage from the blast, and six to eight field hospitals are in the process of being shipped into Lebanon by neighboring countries "soon."

An independent journalist who felt the impact of the second explosion at home wrote on Twitter about what it was like. "I was trying to explain to dad (on my left) that there's an explosion and that we need to move," she said. "I turned right, the second explosion happened, my mom and I flew across the room and all the doors were suddenly opened."

A journalist for the Israeli Public Broadcasting Corporation reported that the blast could be heard as far away as Cyprus, a country located about 145 miles from Beirut.

Beirut is home to more than 2.4 million people. The city's governor, Marwan Abboud, "broke into tears as he toured the site, saying, 'Beirut is a devastated city,'" AP reported. As of Wednesday, the city has been put under a two-week state of emergency, with security reportedly being managed by Lebanon's military. According to Abboud, some 300,000 people are homeless following the blast, and nearly all of the city's supply of grain has reportedly been destroyed.

Diab declared Wednesday a national day of mourning for the country. Countries around the world, including France, the U.K., and Israel have also pledged to help Beirut, along with the European Union broadly. In a statement Tuesday, Secretary of State Mike Pompeo said that the United States is "closely monitoring and stand[s] ready to assist the people of Lebanon as they recover from this tragedy." On Thursday, Politico reported that the U.S. military had committed to providing three "planeloads" of medical supplies, food, and water. At least one American citizen was reportedly killed in the explosion.

This article was originally published on Aug. 4, 2020

More like this
Darius, the world's longest bunny, has been stolen
By AJ Dellinger
Nearly half of Republicans believe absolute nonsense about Trump's Capitol coup
By Rafi Schwartz
New York legalized weed and the NYC police commissioner is real sad about it
By Rafi Schwartz
Stay up to date