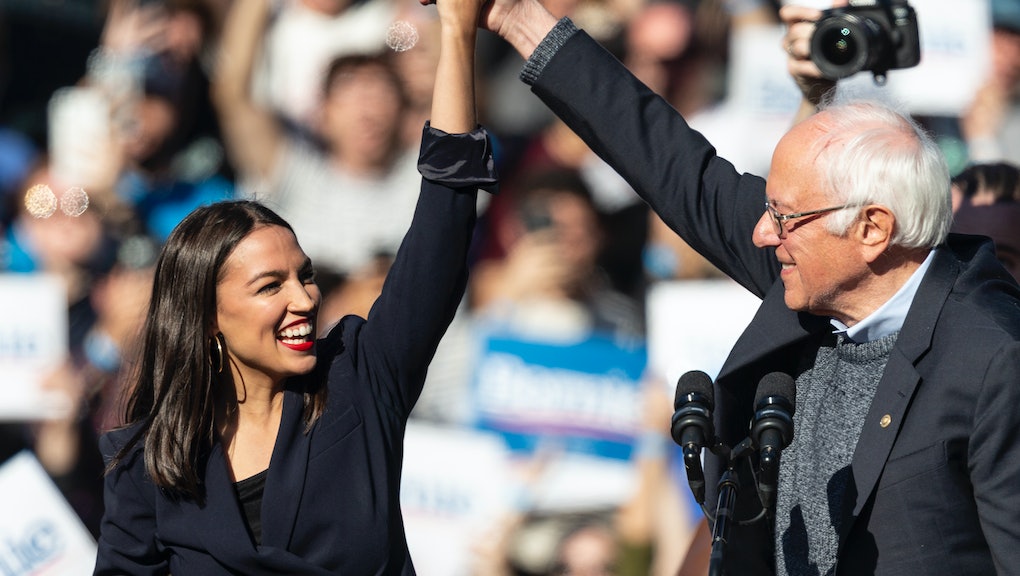 Two of America's most progressive leaders are teaming up to tackle the housing crisis. New York Rep. Alexandria Ocasio-Cortez and Vermont Sen. Bernie Sanders have brought new legislation to Capitol Hill that would use the framework of the Green New Deal to specifically rehabilitate public housing. Dubbed the Green New Deal for Public Housing Act, the bill combines calls to modernize public infrastructure with the necessity to combat climate change. It would require all of America's public housing stock to be modernized and rehabilitated — a large-scale upgrade that would not only make conditions safer for the residents who live there, but also overhaul the energy systems of these units with the goal of achieving carbon neutrality within 10 years.

When Ocasio-Cortez and Massachusetts Sen. Ed Markey released the original climate-focused Green New Deal resolution earlier this year, it drew predictable rightwing ire; critics like Senate Majority Leader Mitch McConnell (R-Ky.) wrote the bill off as "socialism." But even some Democrats were skeptical of the ambitious proposal, with many saying it was too vague. Tellingly, even House Speaker Nancy Pelosi glibly quipped: "The green dream or whatever they call it. Nobody knows what it is, but they're for it right?"

The new public housing-oriented spinoff pushes back against that critique by offering specific suggestions for how green infrastructure and energy can be maximized within the housing sector. The bill specifically details how seven grant programs would be used to transform public housing units into carbon neutral communities. These grants would cover projects including installing all-electric state of the art efficient appliances, such as laundry machines and heaters; renovating units with energy efficient insulation and windows; and providing funding for public housing communities to install items like solar panels on their rooftops, so they can generate and store their own energy.

Data for Progress, a progressive think tank, estimated that the Green New Deal for Public Housing Act would cost somewhere between $119 billion to $172 billion. That cost would cover green retrofits that "would cut 5.6 million tons of annual carbon emissions — the equivalent of taking 1.2 million cars off the road,” Data for Progress projected in its summary of the act.

With such a hefty price tag, it comes as no surprise that earlier this year, many Republicans — and even some Democrats, like California Sen. Dianne Feinstein and New York Rep. Max Rose — have questioned how the larger Green New Deal would be paid for. Pelosi has advocated for a "pay-go" approach to politics, where the legislature should specify how programs and plans would be financed before enacting them into law. Ocasio-Cortez seemed to anticipate that critique, telling The Washington Post that the housing policy could be paid for by repealing President Trump's 2017 tax cuts, which have primarily benefitted the rich.

There are currently more than 1.2 million public housing units across the country that are subsidized by the federal government. Data for Progress said the plan would hugely improve the living conditions of the nearly 2 million people living in those units. The bill takes a holistic approach to improving the lives of public housing residents, aiming to improve quality of life by building healthier grocery stores, community gardens, and childcare centers onsite at public housing communities. Community residents would additionally be prioritized in hiring at these onsite resources, helping give them more economic power.

Like the larger Green New Deal resolution, this legislation focuses on creating green jobs through a shift toward green infrastructure. Data for Progress estimated that the act could create up to 240,723 jobs per year nationally, in sectors like manufacturing and construction thanks to the need for renovations and new infrastructure. The bill also includes “Buy America” requirements for construction.

Ocasio-Cortez told The Washington Post that this work would boost the economy while pushing back against the idea that moving toward a green economy kills jobs without providing replacements.

“We need electrical workers. We need construction workers. And it doesn’t have to just be fossil fuel pipelines that create these kinds of jobs," she said. "We can create millions of jobs in this country by actually rising to the challenge of addressing what this crisis is going to represent."

More like this
Leaked calls reveal the conservative "master plan" to tank climate action
By AJ Dellinger
Oh god, why is Marjorie Taylor Greene challenging AOC to a debate?
By Alisha Sahay
The Chauvin trial is incapable of delivering real justice
By Vanessa Taylor
Stay up to date