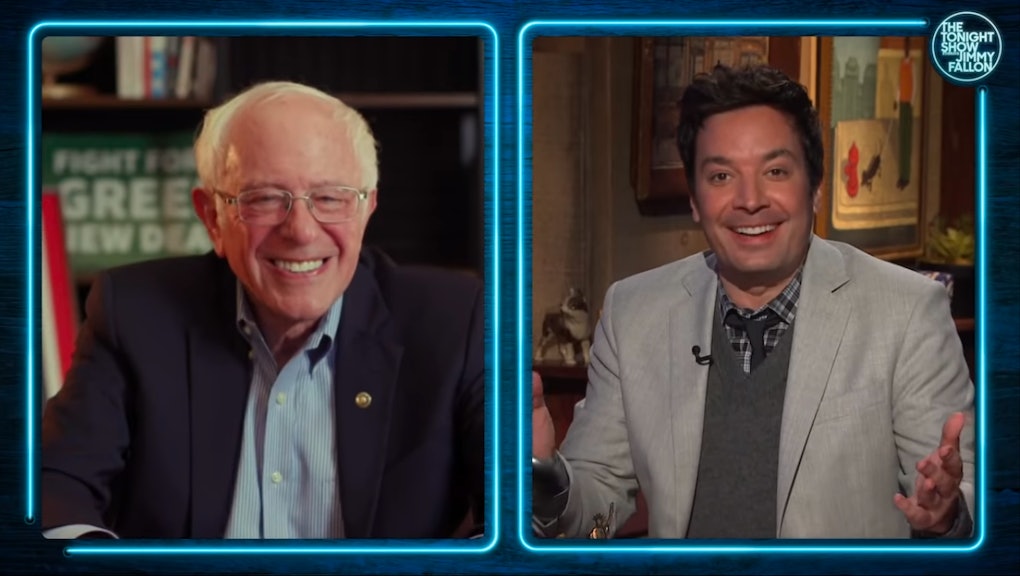 Bernie Sanders would have w— uh, been worth listening to when he appeared on The Tonight Show last month! Back in October, Sen. Sanders chatted with Jimmy Fallon about the impending election and very clearly outlined our current, hellacious limbo.

In a clip that’s gone extremely viral, which you can watch below, Sanders delivered an incredibly on-the-money forecast for how the delayed mail-in ballot counts could lead to Democratic panic on election night, with later mail-in votes breaking for Joe Biden. And yes, he even nailed the part where Trump declared victory on Election Night — even if he was a little early by a few hours:

“Here is my worry: What polls show, and what studies have shown, is that, for whatever reason, Democrats are more likely to use mail-in ballots. Republicans are more likely to walk into polling booths on Election Day. It is likely that the first votes that will be counted will be those people who came in on Election Day, which will be Republican. And here is the fear...it could well be that at 10:00 on Election Night, Trump is winning in Michigan, he’s winning in Pennsylvania, he’s winning in Wisconsin, and he gets on the television and he says, ‘Thank you, Americans, for electing me! It’s all over, have a good day!’ But then the next day and the day following, all of those mail-in ballots start getting counted, and it turns out that Biden has won those states, at which point Trump says, ‘See? I told you the whole thing was fraudulent! I told you all those mail-in ballots were crooked, and we’re not gonna leave office!’”

Although it’s a little eerie to see in retrospect, this stuff didn’t exactly require a crystal ball. President Trump had consistently attempted to delegitimize mail-in voting, and top Republican lawmakers like Sen. Ted Cruz openly flirted with the idea of election results hinging on a Supreme Court decision. This was always on the table, but it’s still striking to see one of the ugliest scenarios play out in real time.

Perhaps more impressive than his Tonight Show forecast, Sanders tweeted two days before the election that double-digit polling leads for Biden and the Democrats were a risky mirage to buy into. And as every progressive ballot initiative that’s passing in states that went for Trump, he also might have been onto something in embracing popular policies that appeal to voters, but that’s for another time.

Whether or not Biden manages to eke out an electoral victory — as is looking more likely on Wednesday morning than it did on Tuesday night — harsh reckonings will almost certainly occur within the Democratic party, pollsters, and media organizations that missed the signs again. Hopefully the people who forecasted such a tight race get some say in what comes next.

More like this
8 shows like 'Ted Lasso' to watch if you need more feel-good TV
By Brandon Yu
This restaurant's viral anti-vax stance is a sad, predictable sign of our culture wars
By Brandon Yu
Issa Rae, Lil Nas X, and J-Lo just gave us a masterclass in social media
By Keith Nelson Jr.
Stay up to date