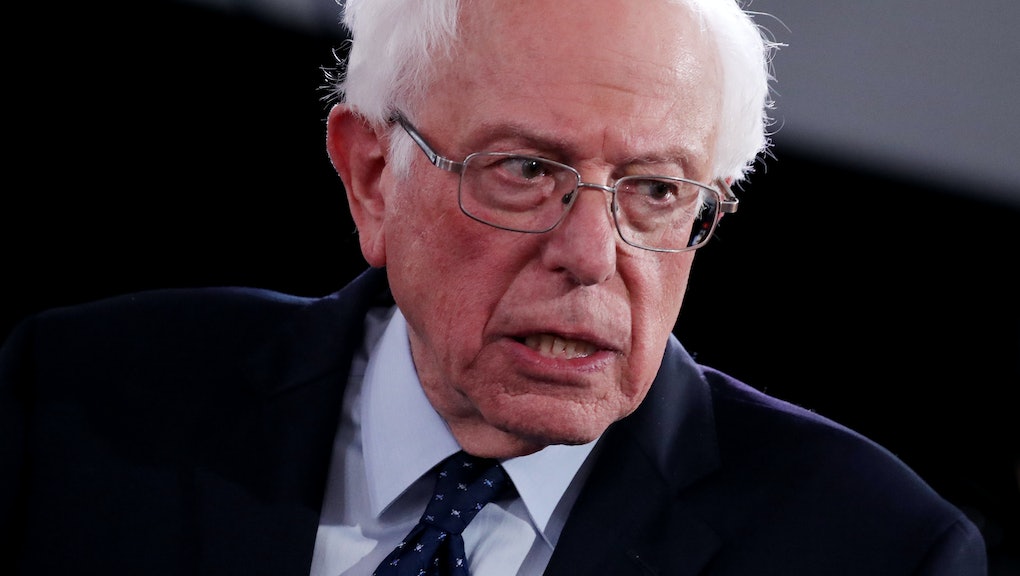 Facebook may have shut down the "Storm Area 51" event that managed to rack up more than two million attendees, but people know the truth is still out there. Chief among these truth seekers, apparently, is Democratic presidential candidate and Vermont senator Bernie Sanders. During an appearance on the Joe Rogan Experience podcast this week, Sanders promised to reveal any details on UFOS and aliens that he can, if he's elected in 2020.

In a brief exchange that took part during an hour-long interview between Sanders and Rogan, the host presented Sanders with the possibility that, upon taking up residence in the White House, he might be presented with details about UFOs and alien life. Sanders humored the question, noting that his wife has already hounded him for anything that he's been able to access as a member of Congress. Here's the full exchange:

Sanders: Well I tell you, my wife would demand that I let you know.

Rogan: Is your wife a UFO nut?

Sanders: No, she’s not a UFO nut. She goes, "Bernie, what is going on, do you know? Do you have any access?"

Rogan: You’ll let us know though?

Sanders: Alright, I’ll be on the show, we’ll announce it on the show. How’s that?

From the exchange, it seems like Rogan is far more interested in the topic than Sanders is, which makes sense. The senator rarely veers too far from his message about economic inequality. Now, were aliens somehow involved in a scheme to rig the system in favor of millionaire and billionaires, that might get Sanders' attention. Instead, UFOs and alien life are pretty squarely in Rogan's wheelhouse, who regularly brings up the topic with guests on his show. Given that he had a person who could be president sitting across from him, it's hard to fault him for asking — and he got a promise for a potential exclusive scoop out of it, should Sanders win the presidency.

This isn't the first time that Sanders has been presented with questions about UFOs and aliens. During the 2016 presidential election cycle, the then-candidate for president was asked by New Hampshire newspaper The Conway Daily Sun his position on disclosing to the public information about UFOs. (The Conway Daily Sun has made it a point of trying to get as many candidates on-record about the issue as possible when they pass through the state for primary elections.) In a conversation with Beyond Presidential UFO, a site that tracks political candidates positions on UFOs and extraterrestrial life, Conway Daily Sun reporter Draymond Steer reportedly said that Sanders was dismissive of the question. “Bernie had no interest in the UFO question,” Steer apparently told the publication, “and gave me a flippant response.”

While he might not particularly care about the issue, Sanders is now one of the few 2020 presidential candidates to go on the record about UFOs. Andrew Yang, the entrepreneur and philanthropist running for the Democratic nomination who is best known for his plan to offer a $1,000 per month "Freedom Dividend" to every American, is the lone other member of the field to address the topic directly. Yang, who will honestly answer questions about anything and has gone on the record about everything from circumcision to the direction of the New York Knicks, was asked by the Conway Daily Sun about his position on UFOs earlier this year. He told the paper that he's "very curious" about the topic and he believes they "probably do exist."

Save for some die-hards, it seems unlikely that taking a firm position on UFOs and alien life is going to win any candidate votes. However, there is a growing belief among Americans that the government is sitting on information about extraterrestrial activity. A recent poll conducted by YouGov found that 28 percent of people believe it's "very likely" the government is hiding information from the public about UFOs. Another 26 percent said it seemed "somewhat likely." That means more than half of Americans believe the government is hiding something. Another poll run earlier this year by Insider found one in five Americans believe aliens have visited earth. No wonder so many people are ready to raid Area 51.