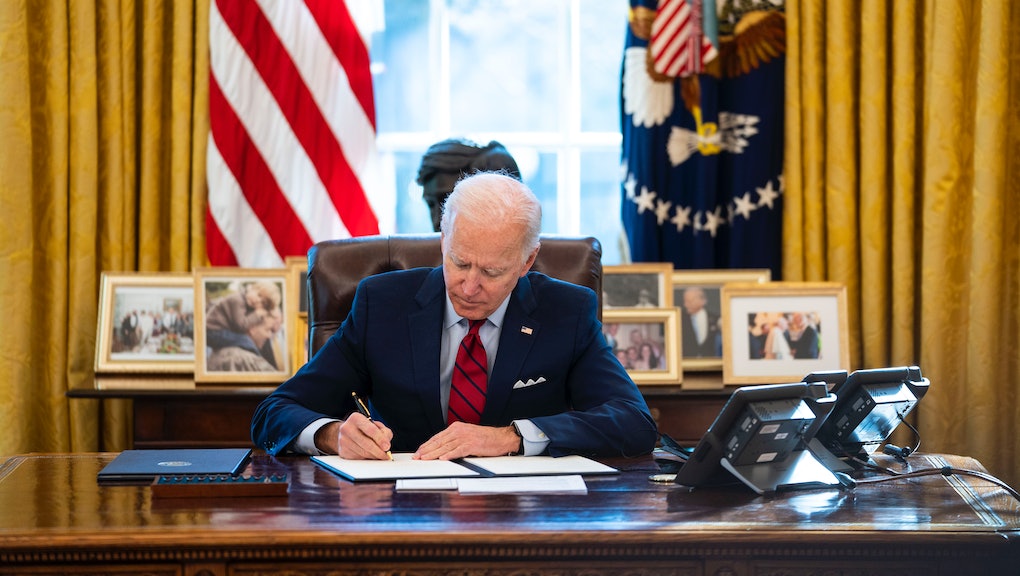 Biden signed 3 executive orders on immigration. Here's what they actually do

On Tuesday, President Biden signed three executive orders reversing some Trump-era immigration policies, which largely criminalized immigration and migration and punished those attempting to make a home in the U.S. "We're going to work to undo the moral and national shame of the previous administration that literally, not figuratively, ripped children from the arms of their families, the mothers and fathers at the border, and with no plan — none whatsoever — to reunify the children," Biden said in the Oval Office as he signed orders on reuniting separated families, addressing the root causes of migration, and "restoring faith" in our immigration and asylum systems.

While the executive orders signal a shift away from former President Donald Trump's approacheto immigration and toward what Biden calls "humane" policies, the executive orders are light on actual executive action. The order to reunite children, for example, actually just creates a task force on the matter to be chaired by the recently confirmed Homeland Security Secretary Alejandro Mayorkas. It's unclear what the timeline for reunification will be, what services will be offered to separated families, and which families are eligible for reunification.

"The Trump administration wreaked so much havoc over the period of four years, and so it's going to take time to undo that kind of harm," said Marielena Hincapié, the executive director of the National Immigration Law Center, to The Washington Post. "We want them to take their time and to be very deliberate on how they're making their changes."

The other executive orders, one to rebuild the asylum system and another that pauses the Trump administration's Remain in Mexico policy, also slow-walk changes and lack specifics. As the American Civil Liberties Union pointed out, "the lack of concrete action to rescind and unwind more unlawful and inhumane policies that this administration inherited — and now owns — is concerning." Not only that, but pausing the Remain in Mexico policy while it's undergoing a review doesn't actually end the program.

Biden himself acknowledged the lack of policy specifics when signing the executive orders: "I’m not making new law. I'm eliminating bad policy." But the lack of specifics leaves some advocates wondering why the Biden administration, which currently enjoys a Democratic majority in both the House of Representatives and Senate, would take such cautious steps. In a statement, Omar Jadwat, the director of the ACLU’s Immigrants’ Rights Project, said, "[It] is troubling that today's orders did not include immediate action to rescind and unwind more of the unlawful and inhumane policies that this administration inherited — and now owns."

As the Post pointed out, the executive orders allow for some Trump policies to roll over into the Biden administration. For instance, Title 42, which the Trump administration put in place as a pandemic emergency measure, permits the U.S. to "expel" people to Mexico if they try to enter the country without proper documentation or through proper entry points. "Immigrant advocates have urged an immediate halt to the expulsions," the Post wrote, "saying they leave families and children vulnerable to criminals in dangerous Mexican border cities."

More like this
Biden has hit his 100th day in office. So what's next?
By Rafi Schwartz
Liz Cheney is ousted from GOP leadership as the Trump cult takes over
By Rafi Schwartz
Lindsey Graham just can't quit Donald Trump
By AJ Dellinger
Stay up to date