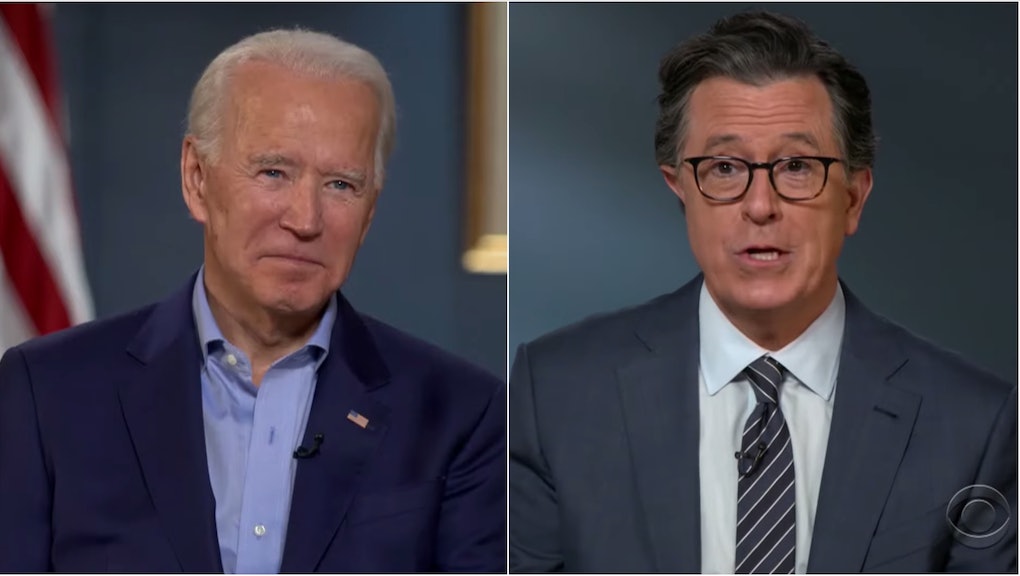 Reigning king of late-night comedy Stephen Colbert sat down with Joe Biden and Dr. Jill Biden last night. In the notably serious interview, the Late Show host asked the president-elect about the people in Washington who "are going to try to use your adult son as a cudgel against you,” referring to the federal investigation into Hunter Biden’s tax affairs. But the soon-to-be president said he was “not concerned” about the accusations. “It's used to get to me. I think it's kind of foul play, but look, it is what it is,” Biden told Colbert.

The theme of the interview was Biden calling out political “malarkey” and vowing to transcend partisan bickering to unite the nation. It’s a lofty goal — which Mitch McConnell will try to thwart at every turn, no doubt. The president-elect made it clear he won’t engage in the mud-slinging, however. Facing a “nation divided and a world in disarray,” Biden said he’d look past the Republicans who’ve yet to acknowledge his victory or who target his family with personal attacks in order to deliver meaningful policies to the American people.

When the future first lady, Dr. Jill Biden, joined her husband to chat with Colbert, he asked her about the bizarre recent op-ed in The Wall Street Journal asking her to drop the “Dr.” from her name. "That was such a surprise," she told Colbert. “It was really the tone of it … You know, he called me ‘kiddo.’ One of the things I’m most proud of is my doctorate, I mean, I worked so hard for it.”

The piece, written by former WSJ magazine editor Joseph Epstein, was roundly slammed as misogynistic. Dr. Biden earned her doctorate in education from the University of Delaware in 2007. She’s been an english professor at Northern Virginia Community College since 2009 and will continue teaching full-time during her husband’s presidency.

The Late Show exclusive ended on an uplifting note. While sharing some of their family holiday traditions (evidently Biden is like a drill sergeant about tinsel application, which is super weird), the president-elect said he believed that life in America would be back to normal or “awfully close” by next Christmas. With vaccines rolling out to the most vulnerable populations now, the post-pandemic future doesn’t seem that far out of reach anymore.

Watch the Bidens's entire interview with Colbert below:

More like this
As Biden nears an elusive infrastructure deal, Trump is saltier than ever
By Rafi Schwartz
Biden's idea of filibuster reform is to bring back painfully long and boring floor speeches
By Vanessa Taylor
Trump kept a Gitmo prisoner detained for 5 extra years. Biden has finally freed him
By Rafi Schwartz
Stay up to date