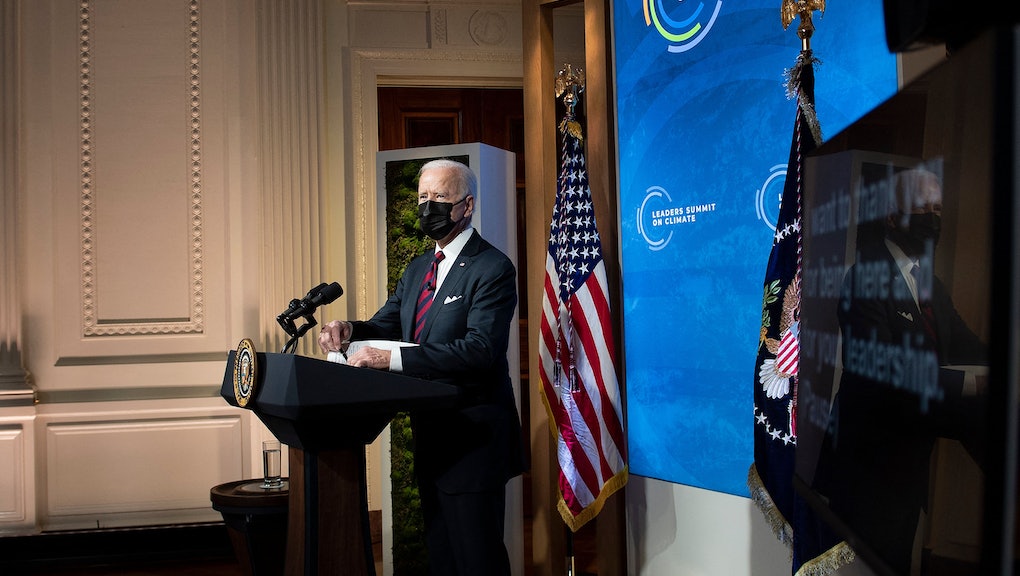 Biden's big Earth Day climate pledge did not impress everyone

By 2030, the carbon footprint of the United States will be cut in half. That is the pledge that President Biden made on Thursday morning during the Leaders Summit on Climate, committing the U.S. to a significant draw-down of carbon emissions with the ultimate goal of achieving net-zero by 2050. While the Earth Day pledge marks a significant and meaningful re-commitment to the international community, showing that the U.S. is once again serious about climate change, climate activists are concerned that the plan doesn't go far enough.

The official commitment made by Biden will seek to reduce greenhouse gas emissions by 50-52% below 2005 levels by the start of next decade. It is double what the country originally pledged under the Paris climate agreement in 2015, when then-President Barack Obama sought to cut emissions by 26-28% by 2025. The country has seen an overall decline in emissions since the original pledge, down 12% from 2005 levels as of 2020, and even saw a slight decline during the Trump administration despite a clear fossil fuel fetish and straight up climate denialism spilling into the ranks of the federal government.

Still though, that leaves the country less than halfway to its original goal for 2025. Experts have warned that at its current pace, the U.S. will fall well short of doing enough to prevent the planet from warming to potentially disastrous levels.

Biden's pledge puts the U.S. in line with recommendations from some environmental groups, who believe reaching a 50% reduction in greenhouse gases by 2030 is a key stepping stone to achieving net-zero emissions by mid-century. It is notably similar to the goals that a number of major corporations have recently pledged to as well, and falls in line with the recommendations of corporate America.

However, for many climate activists, advocates, and scientists, halving emissions by 2030 is simply not enough. While it does fall in line with the global goal the U.N. has set, it cannot be ignored that the U.S. is one of the biggest contributors to global emissions and is already well behind where it needs to be on climate action. It must therefore not simply reach for the minimum goal, but go above and beyond to show its leadership and accountability for its outsized contributions to climate change.

Earlier this year, Climate Action Tracker published a study that suggested the U.S. would need to reduce emissions by between 57-63% by 2030 in order to prevent the planet from warming more than 1.5 degrees Celsius. Others have called on the Biden administration to go even further. “A pledge to cut emissions 50-52% by 2030 simply isn’t big enough to meet the massive scale of the climate emergency,” Jean Su, director of the Center for Biological Diversity’s Energy Justice program, said in a statement. "The U.S. is the largest historic polluter and one of the wealthiest nations, and it must do its fair share and cut domestic emissions by at least 70% by 2030. Evan Weber, co-founder and political director of the climate activist group Sunrise Movement, said the 50% goal is "nowhere near enough," and argued, "The science is clear — if the U.S. does not achieve much, much more by the end of this decade, it will be a death sentence for our generation and the billions of people at the frontlines of the climate crisis."

In response to Biden's pledge, activists with Extinction Rebellion D.C. put on a display of protest, wheeling in more than a dozen wheelbarrows full of cow feces, which they dumped in a pile in the middle of the street outside the White House. The message: Biden's pledge is bullshit.

While the U.S. may still be viewed as slacking by those who would like to see the country be much more aggressive, Biden's pledge has seemingly at least prompted other major polluters to increase their efforts to cut back on greenhouse emissions. Japan updated its goal to reduce emissions by 46% by 2030, and Canada set a new target of reducing emissions by 40-45% by next decade. Countries like China, Russia, and India also appeared engaged and expressed a willingness to work with the U.S. and the global community to address climate change. It appears that one man's bullshit is another man's fertilizer.