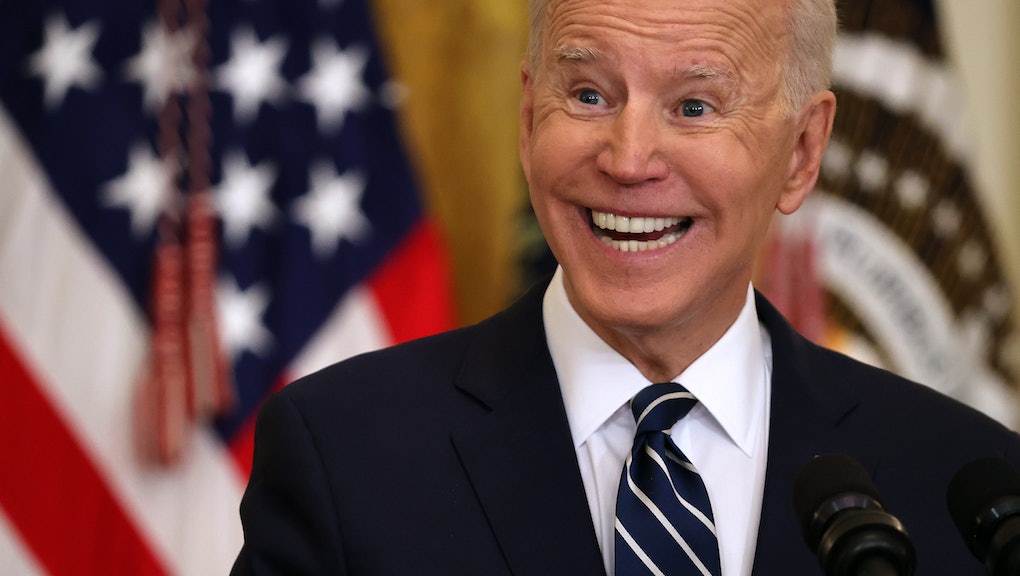 For nearly an hour of questions focused primarily on immigration, his legislative agenda (and Republican opposition to it), and the adversarial U.S.-China relationship as it enters the 21st century, Biden offered the sort of detailed, nuanced, and frequently self-aware answers long missing after four years of former President Donald Trump's rambling, often incoherent soliloquies.

Announcing a new goal of achieving 200 million COVID-19 vaccinations within his first 100 days in office — a doubling of his initial goal of 100 million, which he achieved after just 58 days — Biden confessed that he "know[s] it's ambitious, twice our original goal."

"But" he added, "no other country has even come close."

Pressed on his immigration agenda in light of an influx of migrants at the U.S. southern border, Biden seemed to struggle finding the right balance between emphasizing a restrictive, largely closed-border policy, and stressing compassion and accommodation for children traveling into the U.S. by themselves — children, he insisted, whom he would not allow to "starve to death and stay on the other side" of the U.S.-Mexico border.

At several points during the press conference, Biden took conspicuously long pauses between thoughts, and at one point even uncomfortably joked "am I giving you too long of an answer?" to the POTUS-starved press corps. "Maybe I should stop there," he added.

However, Biden allowed himself several moments of agitated anger during the question-and-answer session, most notably while erupting at the GOP's slate of voter suppression laws working their way through a number of statehouses in the wake of the 2020 general election.

"What I'm worried about is how un-American this whole initiative is," Biden said. "It's sick. It's sick."

"This makes Jim Crow look like Jim Eagle," he continued. "It cannot be sustained."

Biden wound down his press conference with an extended, almost philosophical examination of the relationship between the United States and China, explaining that any competition between the two superpowers was essentially a war of ideas between democracy and autocracy. "That's what's at stake here," he said. "We've got to prove democracy works."

Ultimately, Biden's first formal press conference was a mixed affair. Oddly, there were no questions about the pandemic, which is still very much ongoing. And while the event showcased both the depth and breadth of the president's understanding of the number of crises he currently faces as head of state, it was also punctuated by multiple moments of unsure rhetorical footing and verbal fragility. We don't know how long the press corps will have to wait before the president holds a second press conference, but what seems clear now is after years as a senator and vice president, Biden is nevertheless still trying to find his footing with the press.

You can watch Biden's entire press briefing below.