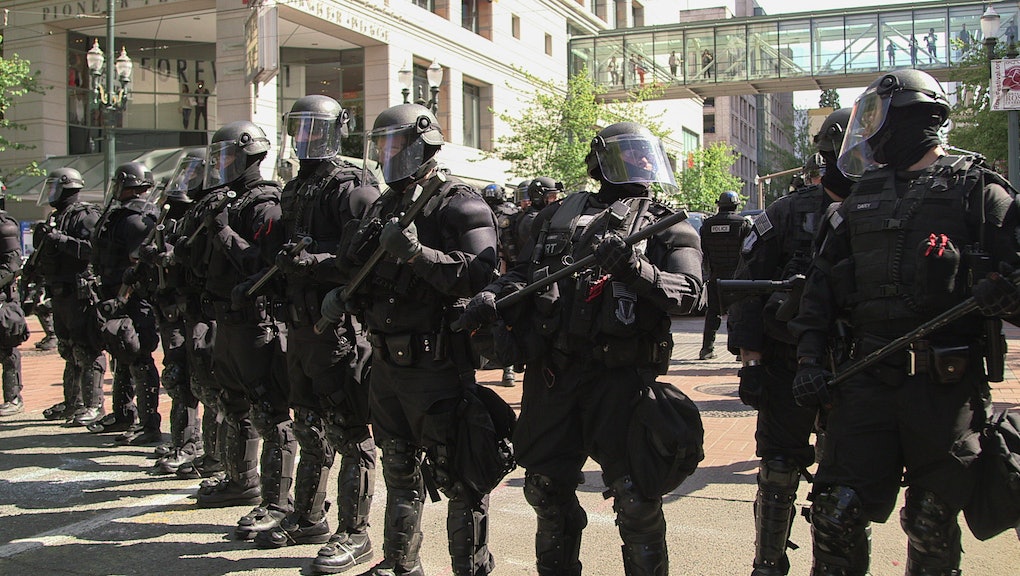 It is no secret that the ill effects of fossil fuel companies disproportionately impact communities of color—the result of decades of discriminatory housing practices that have relegated marginalized groups to areas of higher pollution. But it turns out gas and oil companies impact these communities not just with dangerous waste and runoff, but with their money, too. Research published Monday from the Public Accountability Initiative's research database project LittleSis found that Big Oil has been bankrolling police foundations in major cities across the United States for years now.

According to the report companies including Chevron, Shell, Marathon Petroleum, and a number of other major energy firms have given money to the law enforcement organizations in Seattle, Chicago, New Orleans, Salt Lake City, and Washington, D.C., among other cities. And it’s not just oil companies. Publicly traded utility companies like Exelon, Entergy, and Duke Energy all have ties to these nonprofits that support police departments as well.

Cops typically receive funding from the cities and municipalities they serve. According to the Center for Popular Democracy Action, a nonprofit organization that advocates for progressive policies, most cities spend between 20 to 45 percent of discretionary budgets on funding the police. As a whole, the United States spends more than $100 billion on policing every year, so it is not as though most agencies are strapped for cash. Yet, police foundations serve to funnel even more money into the coffers of the cops. These organizations are typically set up as nonprofits and raise funds for law enforcement agencies, collecting donations from individuals, local businesses, and national sponsors. That money is then used to fund projects for the police force, including procuring surveillance technology and weaponry.

While these organizations typically don't contribute more funding than what comes from the state and local level, they also are not subject to public oversight. While millions of people across the country continue to advocate for police reform that would strip some of the money budgeted to law enforcement agencies and repurpose it for social programs, police foundations can undermine those efforts. Examples are plentiful across the country, where police foundations proudly tout what they have acquired for the cops. The Houston Police Foundation secured SWAT equipment and tactical weaponry for the department. In Philadelphia, a foundation bought the city's police long guns and drones. In Atlanta, a police foundation helped secure funds to create a 12,000 camera surveillance network around the city. And in Los Angeles, a police foundation helped local law enforcement secure software from controversial surveillance startup Palantir. All of this happens outside the standard mechanisms of public scrutiny.

On top of providing law enforcement with the funds to acquire weapons and technology that the city and the public may not approve of, police foundations also serve as a way for corporations to curry favor and trade cash for influence. A ProPublica report from 2014 noted that companies that sell services to police often donate to police foundations. Previous reports have found that major corporations like Target, Google, and Microsoft are all noteworthy donors to various police foundations. Major banks and financial firms including Goldman Sachs, Banks of America, and Wells Fargo have also been identified as backers of these organizations.

Fossil fuel companies have also gotten in on the mix, according to the new report from LittleSis. Chevron, one of the top 25 biggest polluters in the world, is a major donor to the Salt Lake City Police Foundation. Brian K. Cook, a regional manager at Chevron, sits on the board of the Houston Police Foundation. The oil company is also a corporate sponsor of the New Orleans Police and Justice Foundation. It shares that distinct honor with Shell, which is a featured sponsor of that very same police foundation. While giving cash to police in New Orleans, the fossil fuel company has also been accused by federal regulators of failing to properly control industrial flares at a chemical plant and polluting the city for more than two decades. Marathon Petroleum, the largest oil refining company in the US, has backed the police foundation in Detroit. Whitney Walton, a security coordinator for the company, sits on the board of the Detroit Public Safety Foundation. Meanwhile, the company has a refinery in Detroit that has been identified for violating state environmental regulations 15 times since 2013. The company just recently agreed to pay out $280,000 to alleviate air pollution from its plant, which has harmed students of a nearby public school.