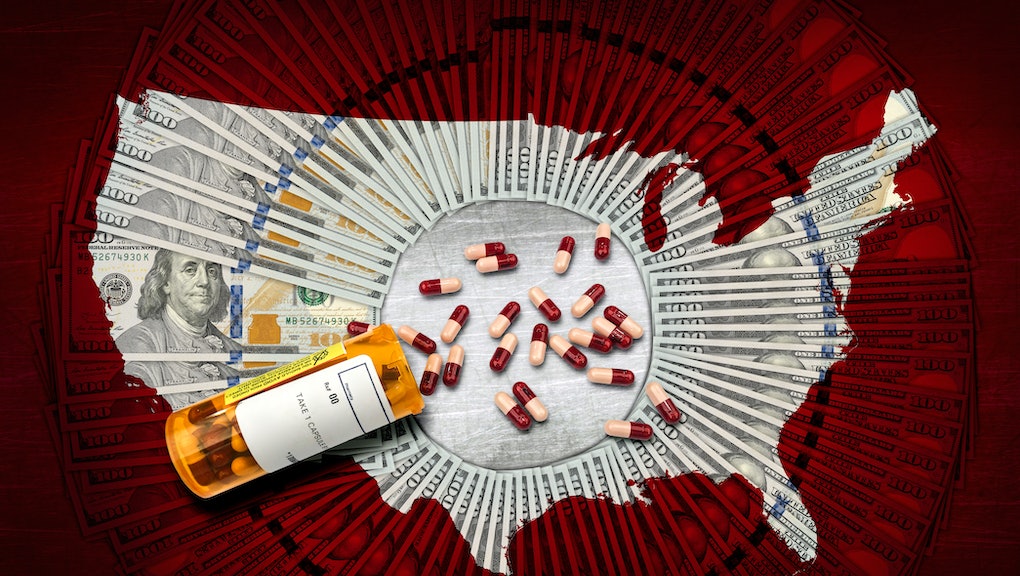 Since 2013, various states and local governments have filed thousands of lawsuits against Big Pharma for their role in the crisis, but it's looking like their efforts were only so fruitful. Lawyers expect the payout from opioid manufacturers, distributors, and retailers in a national settlement to be far less than what would likely be needed to repair the long-term damage wreaked by the opioid addiction crisis, the New York Times reports.

Lawyers and analysts told the Times that the final payout would likely range between $75 and $100 billion. While that amount seems like a lot, it's less than half of what the four biggest tobacco companies settled on in the landmark 1998 settlement with states over tobacco-related healthcare costs — $206 billion, over 25 years. There are wide-ranging estimates about the cost of treatment programs and other steps to remedy the opioid addiction crisis, but the federal Council of Economic Advisors calculated the economic toll from opioids to be more than $2.5 trillion.

Two settlement offers, both proposed last year, have been disclosed to date. One is from Purdue Pharma, which manufactures OxyContin, is worth around $10 billion, per the company. The other is from the three major drug distributors, McKesson, AmerisourceBergen, and Cardinal Health, and two manufacturers, Teva and Johnson & Johnson, apparently worth $48 billion. Lawyers ideally want to reach a national agreement before an opioid-related trial in New York, scheduled to start on March 20.

That fact that some of the biggest corporations in the country wouldn’t be compelled to take financial responsibility for the opioid addiction crisis may seem absurd, not to mention unjust, but the Times cited a few reasons why a national opioid settlement would be less straightforward than the tobacco one.

Firstly, the four tobacco companies made one inarguably harmful product. Prescription opioids, on the other hand, are helpful for some people. Plus, they make up a tiny fraction of the businesses of many of the companies targeted in the settlement, like Johnson & Johnson, McKesson, and CVS, which also manufacture or sell various medicines, drugstore products, and medical devices. Making them foot too high a bill might not be in the public interest.

Also, prescription opioids have killed fewer people than cigarettes. There were nearly 218,000 deaths from prescription opioid-related overdoses between 1999 and 2017, per the CDC. Meanwhile, there are more than 480,000 smoking or secondhand smoking-related deaths every year.

And while tobacco companies were almost solely to blame for landing cigarettes in the hands of consumers, medications, like opioid painkillers, pass through several types of businesses. The federal government may also share some culpability, since the FDA approved the manufacture and sale of opioids, while the DEA was responsible for keeping an eye on sales and distribution.

What’s more, the financial model of the tobacco settlement was predicated on the assumption that cigarette prices and taxes would increase, funding payouts long-term. But this wouldn’t suffice for an opioid settlement, since the production of opioids would likely plummet, and prices probably wouldn’t increase.

It’s unclear whether manufacturers, distributors, or retailers, stand to make the greatest contribution in terms of payouts. Distributors claim they’re strapped for cash, according to the Times. Some manufacturers, like Johnson & Johnson, are doing fine, while Teva and many other generic opioid manufacturers are saddled with debt and other financial woes. How much pharmacy chains, the most financially robust group of defendants — sued mainly because of the quantity of opioids distributed in their pharmacies — can or should pay remains a big question mark.

Disputes among the constituencies of the plaintiffs have also slowed efforts to reach a national agreement. Local governments are wary of states, which pocketed much of the 1998 tobacco settlement money. States that support the settlement offers are pointing the finger at the steep fees charged by private lawyers, who, in turn, criticize the amounts offered by the defendants.

Lawyers say the goal is to hold drug companies accountable, but as Mic pointed out in a previous article, settlement money alone won’t address opioid addiction. Regardless of what the final settlement amount ends up being, for it to have real impact, it needs to be used to tackle poverty, trauma, and other complex factors to prevent addiction from emerging at all.