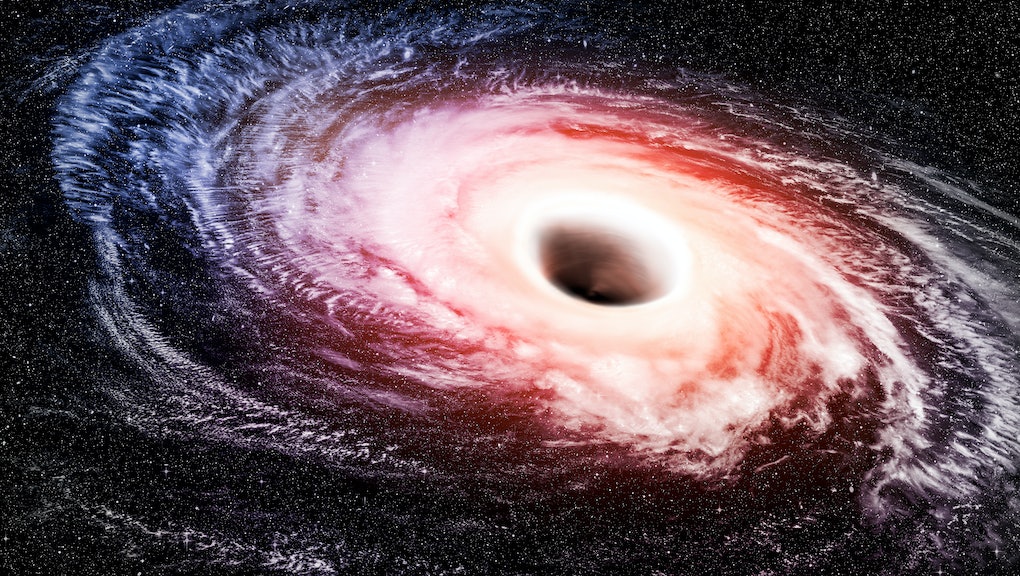 The universe is always changing, but we're often years behind tracking it as it does. Recently, scientists found the biggest explosion the universe has ever seen, the result of an exploding supermassive black hole. Although the explosion took place millions of years ago, the massive dent it left behind has puzzled scientists for years.

Supermassive black holes are scattered throughout the universe. There's even one called Sagittarius A* at the center of our galaxy, the Milky Way, but it's usually pretty chill. However, the supermassive black hole documented in a study published in The Astrophysical Journal was anything but.

The explosion took place in the Ophiuchus galaxy cluster, which is located about 400 million light years away from Earth. Researchers observed the explosion by using X-ray data from NASA's Chandra X-ray Observatory, ESA'S XMM-Newton, radio data from the Murchison Widefield Array in Australia, and the Giant Metrewave Radio Telescope in India.

"We've seen outbursts in the centers of galaxies before but this one is really, really massive," the study's co-author Melanie Johnston-Hollitt, an astrophysicist at the Curtin Institute of Radio Astronomy, said in a statement. "And we don't know why it's so big."

Scientists say the Ophiuchus cluster explosion was caused by an active galactic nucleus or AGN. The term may sound familiar. That's because last week, a different study found that a galaxy powered by an AGN contained molecular oxygen. Basically, AGNs as a whole can be linked to some interesting stuff out in space.

The Ophiucus cluster explosion wasn't completely hidden before. When the supermassive black hole exploded, it effectively punched out some of the plasma surrounding the black hole. This created a "giant radio fossil" in the cluster which scientists have previously observed with X-ray telescopes.

Scientists just didn't know where the hole came from. It wasn't until researchers used radio telescopes that they realized the data "fit inside the X-rays like a hand in the glove," according to co-author Dr Maxim Markevitch, from NASA’s Goddard Space Flight Center.

"In some ways, this blast is similar to how the eruption of Mt. St. Helens in 1980 ripped off the top of the mountain," Simona Giacintucci of the Naval Research Laboratory in Washington, DC, and lead author of the study, said in a statement. "A key difference is that you could fit fifteen Milky Way galaxies in a row into the crater this eruption punched into the cluster's hot gas."

As technology continues to improve, researchers are hopeful that they'll be able to find similar explosions elsewhere. That doesn't erase the significance of this event, though, even if some found it hard to believe at first.

"People were skeptical because of the size of outburst,” Johnston-Hollitt noted in a statement. "But it really is that. The universe is a weird place."