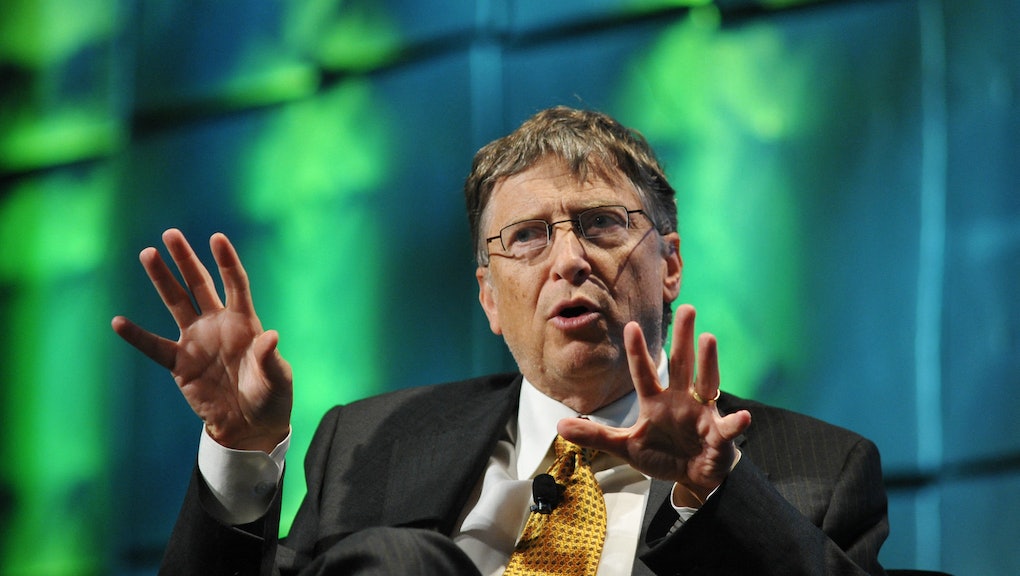 He was supposed to be the One Good Billionaire. Sure, Bill Gates had amassed an unfathomable fortune — but he was giving it all away! He was heralded as an icon of philanthropy, a model for all of the world's richest people to follow to make sure their wealth did the most good. Plus, Gates was just a harmless, lovable nerd. He's not the charismatic leader who charms his way through any situation, nor is does he have the cult-like following of a Steve Jobs or Elon Musk. He's just a dork who happened to get rich.

In the wake of his divorce from his wife of 27 years, Melinda French Gates, details have started to be made public about another side of the billionaire. They're ... not great.

Over the weekend, several reports shed light on the shadier side of Gates — the parts that were kept out of the public eye. According to The New York Times, Gates had a habit of inappropriately pursuing women who worked for him. He allegedly sexually harassed one of his long-time money managers and gained a reputation for propositioning women employees at both Microsoft and the Bill and Melinda Gates Foundation. A Wall Street Journal investigation found that Microsoft began a probe into Gates's behavior in 2019, shortly before the billionaire announced that he was stepping down from the company's board — though Gates claims the decision was unrelated. Reportedly at the heart of that investigation was an affair that Gates had with a Microsoft employee in 2000, which may have occurred while he was still serving as the company's CEO.

And then there's the Jeffrey Epstein connection. Gates's ties to the sexual predator and pedophile, which included several meetings, came to light in 2019 and reportedly pushed his wife to start the divorce process. While Gates has long denied having any sort of meaningful relationship with Epstein, a new report from The Daily Beast suggests that Gates treated the registered sex offender as something of a personal confidant. Gates allegedly viewed his dozens of meetings with Epstein as an escape from what he reportedly called a "toxic" marriage, and Epstein in turn provided Gates with advice on how to end his relationship with Melinda.

Look, people cheat for lots of reasons. People keep bad company for lots of reasons. None of this on its own is necessarily worth completely condemning a person ... but come on. Gates's confirmed affair and reported attempts to inappropriately pursue other employees within his workplaces both show an ongoing pattern of bad behavior and are the result of a disgustingly unequal power balance. He was the most powerful person at Microsoft, his name is on the building at the Bill and Melinda Gates Foundation, and he's one of the richest men in the world. His advances not only appear to have violated the terms of his marriage, but also put the women he approached in an impossible situation of having to tell their boss no — and risk any potential personal and professional consequences that may come with it.

As for the Epstein connection, well, Gates reportedly struck up his relationship with Epstein after Epstein was convicted of soliciting sex from a minor. And, according to The Daily Beast, Gates offered Epstein advice on how to rehab his public image.

These reports put quite the damper on the public image of Gates, who previously seemed like a mild-mannered rich guy who was just trying to do some good with his fortune. Maybe that should have never been his image in the first place. After all, Gates's wealth comes from selling an operating system built on allegedly stolen code and using monopolistic practices to build his computer empire. Yes, he's been giving away his wealth recently, and some of it has been used to achieve breakthroughs that are genuinely good for the public. He also has more money than any person could ever need or use and just keeps getting richer; in fact, he's worth nearly twice what he was when he first promised to give away his wealth.

The Gates saga is a good reminder that wealth is not a virtue. Giving away his wealth does not make Gates altruistic — it's the only reasonable thing to do with that much money. How he treats people is a better indicator of his character than the fact that he parted with a fraction of his money, which he could never spend anyway. And it appears he's not quite as benevolent as his carefully curated public image suggests.

More like this
Honolulu police spent $150k on a robot dog to monitor homeless people
By AJ Dellinger
Jeff Bezos is going to space, which is the most divorced guy thing imaginable
By AJ Dellinger
Uber offered its drivers help with health care, but of course it was a mistake
By AJ Dellinger
Stay up to date