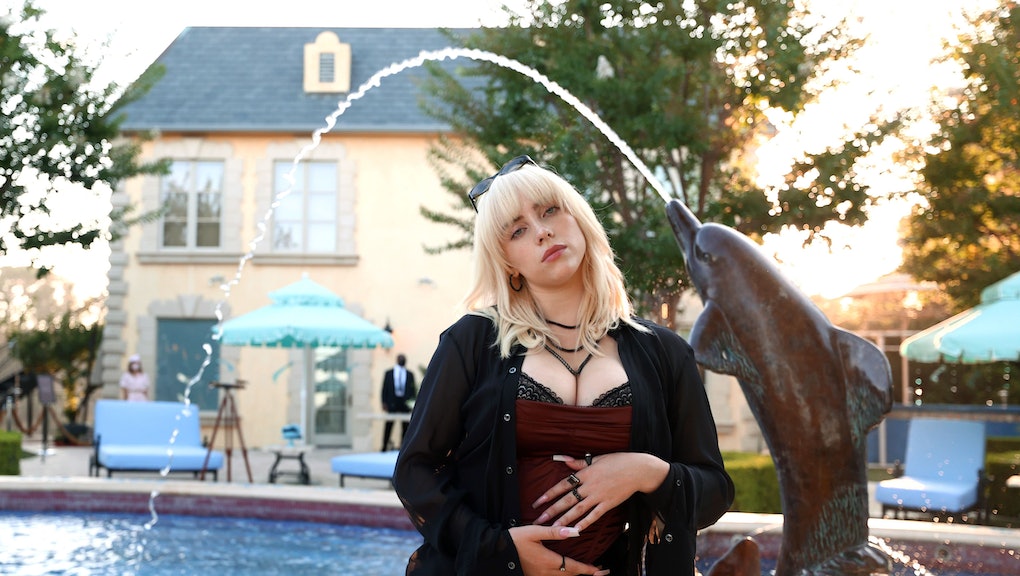 Billie Eilish hates that her body distracts from her music

The ninth track on Billie Eilish's new album, Happier Than Ever, is the spoken-word interlude the pop superstar debuted on tour in March 2020. The video for "Not My Responsibility" depicts Eilish slowly removing her clothing and sinking into inky black goo. "Do my shoulders provoke you? Does my chest? Am I my stomach, my hips?" Eilish asks. "If I wear what is comfortable, I am not a woman. If I shed the layers, I'm a slut. Though you've never seen my body, you still judge it — and judge me for it. Why?"

Because of her gender, youth, profession and decision to — until recently — dress in baggy, oversized clothing that shrouded her curves, Eilish's body has been a point of obsession for some people. It sounds exhausting, especially for a 19-year-old who's been in the public eye since she was basically a kid. An interview with Eilish in The Guardian to mark the release of her sophomore album was a poignant reminder that she's still human, with the same insecurities and dysmorphia lots of us experience. "I’m obviously not happy with my body," Eilish casually confides in the piece, "but who is?"

It sounds difficult to tune out the scrutiny, requiring mental gymnastics to focus on the music. "When I’m on stage, I have to disassociate from the ideas I have of my body," Eilish said. "Especially because I wear clothes that are bigger and easier to move in without showing everything – they can be really unflattering. In pictures, they look like I don’t even know what. I just completely separate the two. [...] Then you get a paparazzi picture taken when you were running to the door and had just put anything on, and didn’t know the picture's being taken, and you just look how you look, and everyone’s like, 'Fat!'"

Meanwhile, Eilish hates that her flesh distracts from the music. "I mean, we only need bodies to eat and walk around and poop. We only need them to survive. It’s ridiculous that anybody even cares about bodies at all," she reasoned. "Everyone’s guilty of looking at celebrities and not processing that they’re just a person. But they are."

The superstar knows she's not immune to this sort of thinking: "I see people online, looking like I’ve never looked, and immediately I am like, oh my God, how do they look like that?" Eilish confessed. The illusion of perfection is insidious. "I know the ins and outs of this industry, and what people actually use in photos, and I actually know what looks real can be fake. Yet I still see it and go, oh God, that makes me feel really bad," she told The Guardian.

One of the songs on her new album calls out this dynamic. "'OverHeated' applies to all the people who promote unattainable body standards," Eilish said. "It’s completely fine to get work done — do this, do that, do what makes you feel happy. It’s just when you deny it and say, 'Oh, I got this all on my own, and if you just tried harder, you could get it.' That makes me literally furious. It is so bad for young women — and boys, too — to see that."

While it's a bummer Eilish has had to endure cruel criticism, it's monumentally cool that she's using her platform to push body positivity. It sounds like her ethos was learned from her parents: "Since I was a kid, my dad and I have always talked about a certain type of person who’s so insecure, or hyperaware and self-conscious, that they never move in a weird way, or make a weird face, because they always want to look good. I’ve noticed that, and it makes me so sad," Eilish said. "It’s such a loss to always try to always look good. It’s such a loss of joy and freedom in your body."

More like this
Alanis Morissette says she was the victim of statutory rape in a new documentary
By Kara Weisenstein
The Fugees' first show in 15 years begs the question: Can you be disappointed by a miracle?
By Keith Nelson Jr.
Lil Nas X’s ‘Montero’ is a vulnerable guidebook on self-acceptance
By Brandon Yu
Stay up to date