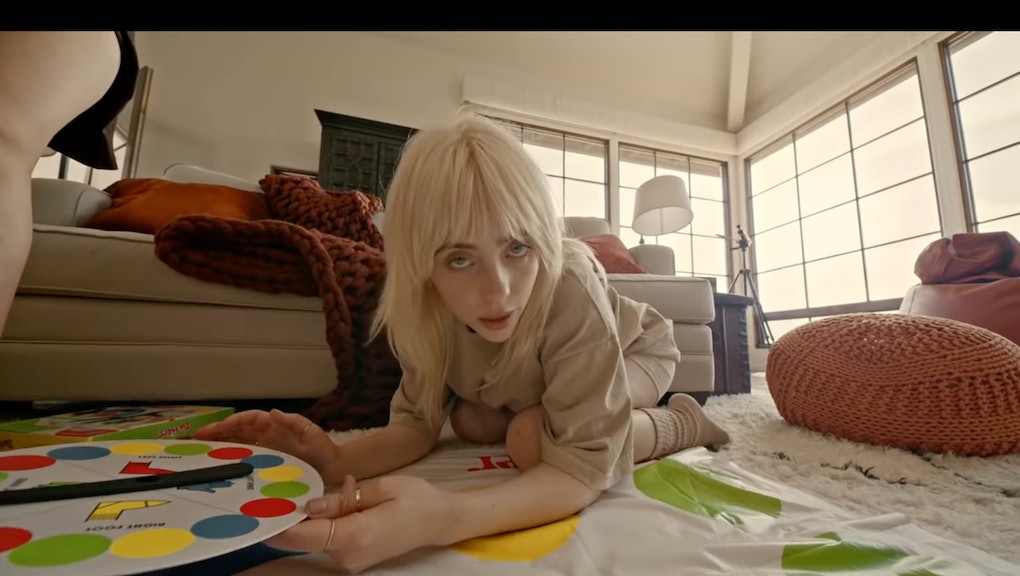 Should we be adding the label of auteur to Billie Eilish’s resume? Having directed the videos for her singles “everything I wanted” and “Therefore I Am”, the pop star hops back in the director’s chair for her new track “Lost Cause.” Surrounded by her friends hanging out, eating, messing around, playing games, and seemingly creating their own little pandemic paradise, Eilish contrasts the sharpness of the lyrics (which call a presumed lover a “lost cause”) with the unrepentant joy of the action on screen.

The video rocks between the aesthetic she’s become known for and the one she’s transitioning into: formerly a fan of the oversized, form fighting street style, colored by neon hair and talon-like nails, Eilish took to the cover of British Vogue to discuss her look and public/body image. The cover featured Eilish in noir-ish boudoir attire: a muted pink colored corset and coiffed blonde hair that looked retro, recalling pin up icon Bettie Page.

The video, which features her sweet and sour vocals, slathered on every vowel and yet underplayed on consonants, has Eilish and her friends in slumber party-ware, sweats and a sky blue nightgown, certainly a nod to the more intimate image of her persona she’s crafting. But the video also contains shots of Eilish donning a backwards cap and too large plaid shirt, an oversized t-shirt, a closet full of shoes, shirts, and pants.

There’s a mildly draggy feel to the video in the brief moments of Eilish switching between explicitly gendered outfits and the clothes which appear to make that presence a little more ambiguous. Her teaser for the album, which echoed eerily and appeared to have strains of 1950s ballad-work, pushed in slowly to show a similar aesthetic as that of the Vogue cover: blonde, aching. The video for “Your Power,” which dropped April 29, had Eilish in a loose desert dawn colored shirt and pants, pointing to an aesthetic in evolution.

As Eilish appears to command more control over her image and aesthetic, she continues to visually hint at a specific language that may inform and shape her career, giving fans a tool with which to understand it. That’s what auteurs do.

More like this
Billie Eilish doesn't have to answer to us about who she loves
By Kara Weisenstein
Nina Simone's granddaughter defends Chloe Bailey's take on "Feeling Good"
By Kara Weisenstein
“Exhilarating, joyful, and of course pretty scary": Musicians on the pressures of returning to the stage
By Kelly McClure
Stay up to date