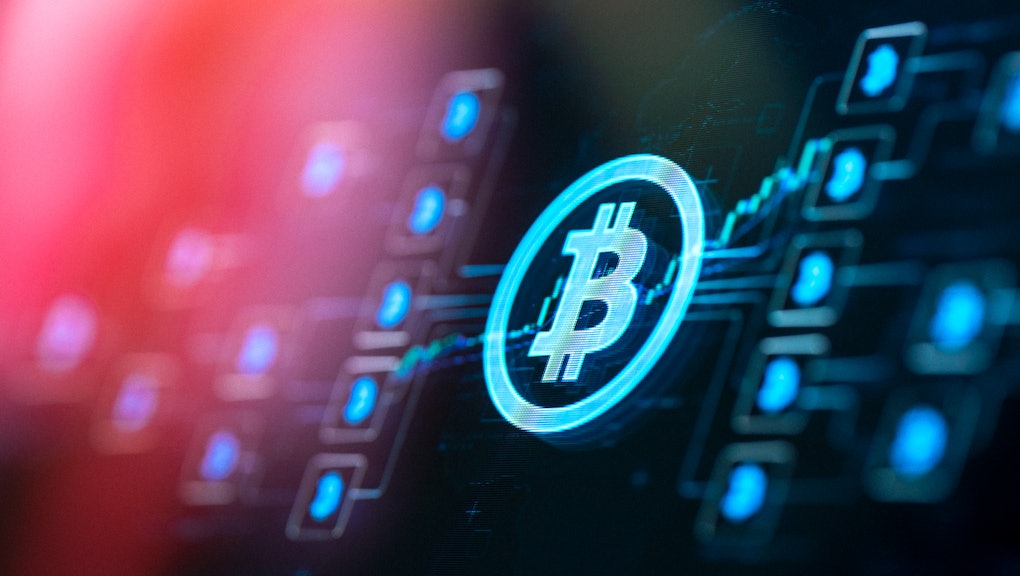 Bitcoin mining is horrible for the environment. Here's what we can do about it

It's easy to understand how coal mining is bad for the environment. Excavating large chunks of land, moving soil and rocks to rake resources from beneath the surface — of course that disrupts ecosystems and unearths harmful pollutants that contaminate the air and groundwater. But there’s another form of mining that may be just as damaging: Bitcoin mining.

Bitcoin mining seems like it should be cleaner and more contained than digging into the ground; after all, cryptocurrency can be mined indoors from a single laptop. But make no mistake: The process is a massive energy suck. According to the Bitcoin Energy Consumption Index, a tracker created by Digiconomist — a platform that monitors “unintended consequences of digital trends” — executing a single Bitcoin transaction requires the same amount of energy that the average U.S. home consumes over a three-week period. That same single transaction has a carbon footprint that is the equivalent of watching more than 50,000 hours of YouTube.

If you think that's bad, just wait until you hear the yearly figures. Per the Digiconomist index, Bitcoin is responsible for nearly 37 million metric tons of carbon emissions each year, which is comparable to the annual carbon footprint for the entire country of New Zealand. Transactions involving the cryptocurrency also consume as much energy as the entire nation of Chile does in a year, per Digiconomist, though the University of Cambridge Bitcoin Electricity Consumption Index estimates the annual consumption rate is even higher than that.

To understand why Bitcoin mining requires so damn much energy, it’s important to know what the process entails. The basic idea is this: Every action completed using Bitcoin is logged on the blockchain, a distributed ledger that serves as a constantly updating account of every transaction. Purchases, sales, trades, and the release of new Bitcoins all get logged on the blockchain.

But instead of all that information getting stored in one central place, like a bank, the blockchain is decentralized and distributed across tens of thousands of computers. If you’re familiar with torrents, you know that in order to download a full file, you actually download bits of that file from other people rather than all of it from a single source. The same concept applies for the blockchain. The idea is that by distributing these transactions across many sources, those sources can all independently verify that everything is where it should be.

But confirming all of this information requires a lot of computing power. There is complex encryption, essentially a series of very difficult-to-decipher codes, that needs to be solved in order to confirm a transaction is legitimate. Because there is no central source to confirm all of the information, individual miners need to offer up the processing power of their own machines each time an equation needs to be solved, because each machine has access to the blockchain. That together is what constitutes mining.

Alex de Vries, the founder of Digiconomist and a data scientist focusing on financial economic crime for De Nederlandsche Bank, tells Mic that Bitcoin miners are incentivized to distribute computing power by being rewarded Bitcoin for their efforts. It was once an easy way to amass the cryptocurrency. But de Vries explains that the competition has become increasingly stiff: "In order to generate new blocks of transactions for Bitcoin’s blockchain, each block has to meet predetermined requirements," he says. "All miners in the network are constantly competing with each other to be the first in succeeding at this, and to take the associated reward." And as Bitcoin becomes more valuable, as it has in the last few years, then there is even more incentive to reap that reward — leading miners to use even more processing power, and in turn more energy.

According to de Vries, the existing network of Bitcoin miners makes about 150 quintillion attempts to solve these equations every second of every day. "This translates to millions of specialized devices that are running constantly," he says.

"I don't think miners are very concerned with the environmental costs associated with what they’re doing."

Bitcoin miners are well aware of the massive amount of energy they consume. As a result, they have gone looking for parts of America’s electric grid that they can utilize more efficiently. It’s not necessarily out of an altruistic desire to limit their consumption, so much as it is an attempt to maybe save themselves some money on their electricity bill. This has often meant setting up servers and mining operations in unexpected locations; cities like Plattsburgh, New York, and Bonner, Montana, have become major hubs for Bitcoin miners. The reason is simple: cheap land and cheap electricity.

In the case of Plattsburgh, miners were drawn to the city of just 20,000 people because it had the cheapest rates of electricity in the world. That was in large part due to a hydroelectric dam on the St. Lawrence River, as well as the result of regulation that kept the cost of electricity subsidized for businesses to encourage industry to take hold. Bitcoin miners took advantage, descending like energy vampires on the small lakeside town. Residents of Plattsburgh complained that their electricity bills skyrocketed after the miners arrived and started using more energy than the city was allotted, resulting in Plattsburgh having to purchase more expensive energy from other fuel sources.

It’s true that miners are often drawn to renewable and clean energy sources — but it’s likely because of cost calculations than any sense of environmentalism. A survey conducted by Cambridge University’s Centre for Alternative Finance found that 76% of miners claim to use renewable energy as part of their fuel mix, but the same study found that just 39% of total energy consumption committed to Bitcoin mining actually comes from renewable energy sources. That means over 60% still rely on dirty-burning fuels like natural gas, oil, and coal. The findings suggest that even miners who make a concerted effort to use renewables are using such a small share that the effects are negligible.

"I don't think miners are very concerned with the environmental costs associated with what they’re doing," de Vries says. In fact, one needs to look no further than Montana to see how quickly the cryptocurrency mining industry will shift to whatever energy source is cheapest, regardless of its potential harms. Late last year, a Bitcoin mining company called Marathon Patent Group announced that it would use a coal-fired plant to power its Bitcoin data center, despite the state boasting an abundance of clean energy alternatives.

Harald Vranken, an associate professor in the Department of Computer Science at the Open University of the Netherlands, tells Mic that some Bitcoin miners have argued that the demand they create for energy actually encourages the development of more renewable energy sources. "That is obviously," Vranken quips, "a very narrow view."

While renewable energy is growing — it overtook coal as a source of energy for the first time in U.S. history last year — it still accounts for just under 20% of total energy production in the country. Vranken points out that until a fully clean grid is developed, green energy amounts to a zero-sum game: If Bitcoin miners are sucking up all the renewables, that means less clean energy for everybody else. And shifting mining to renewable energy sources "will only move the problem" rather than solve it, he says, allowing Bitcoin miners to go green while pushing other industries out.

"If the price goes down, mining becomes less profitable and miners will stop."

Vraken suggests that instead, governments could try to reduce the amount of mining overall. They could make it more difficult to exchange Bitcoin, perhaps by placing obstacles like transaction fees when converting Bitcoin to a fiat currency like the US dollar. This would drive down the number of transactions occurring and create less demand for miners. That may also drive down the price of Bitcoin, and "if the price goes down,” Vranken says, “mining becomes less profitable and miners will stop." He notes that this would have to occur on a global scale to be effective, though, lest miners simply move to other regions with fewer restrictions.

Another approach, Vranken suggests, may be to reduce the availability of the actual equipment needed for mining. To effectively mine Bitcoin at scale, miners need extremely powerful computer rigs with high-end processing units, particularly graphics processing units, which offer more speed and efficiency for the mining process — and suck down tons of energy. Demand for these rigs and computer parts, driven by the profitability of Bitcoin mining, has already created shortages of computer processors, significantly driving up the cost of the equipment for others.

"There are few companies that offer Bitcoin mining systems," Vranken says. If governments restrict the manufacturing or import of that equipment, they’ll rob the miners of the tools they use to suck up all that energy.

There are already some models in place for regulating Bitcoin mining. De Vries points to Quebec, Canada, where authorities have increased the cost of electricity for miners, as one promising example. But while this can work regionally, Bitcoin miners have shown that they are willing to move to wherever conditions are most friendly for their operations, so de Vries notes once again that this would take a coordinated, international effort.

In 2019, China announced its intention to ban Bitcoin mining, citing concerns that the practice is wasteful and creates significant demand for energy. Prior to that, the country banned initial coin offerings, a process of raising money for new forms of cryptocurrency; that policy alone caused Bitcoin’s price to drop by 6% almost instantly, as China is one of the biggest sources of miners in the world. These types of restrictions can suppress prices, even temporarily, and in turn minimize the incentive for mining.

But banning or regulating Bitcoin is no simple proposition. Because regulations vary wildly and the process is decentralized, miners can simply move operations to more friendly regions. That’s why we’ll likely need a unified effort to establish international law for cryptocurrency.

More like this
Another reason to legalize weed: It'll be better for the environment
By AJ Dellinger
Eco-friendly houseplants: Here's how to ensure your indoor plants are good for the planet
By AJ Dellinger
A 400-mile climate march ended with protesters crashing Ted Cruz's front yard
By AJ Dellinger
Stay up to date