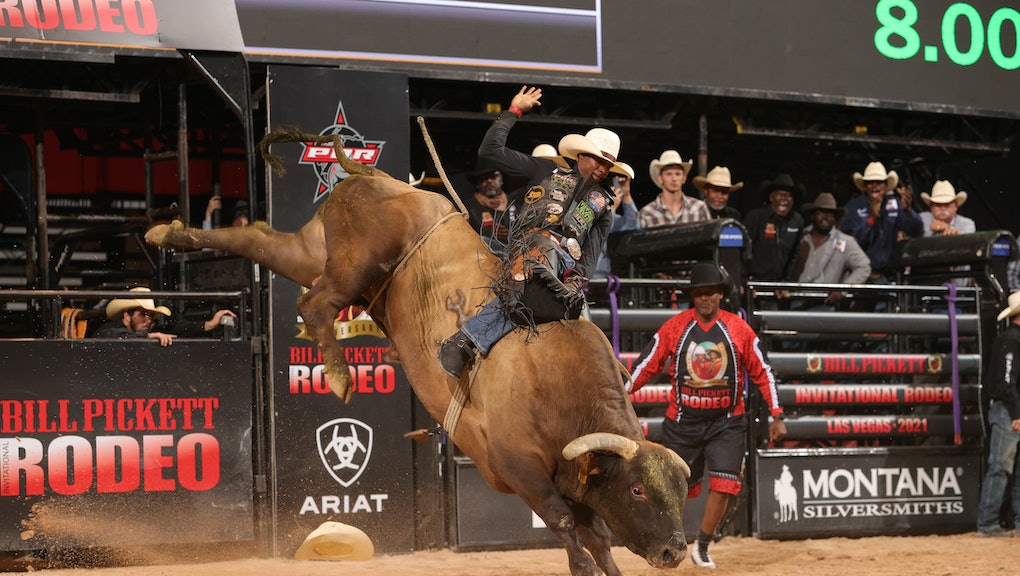 Black cowboys on the future of the Black rodeo

Valeria Howard-Cunningham has been to countless Black rodeos throughout the past three decades; first with her husband, the late Lu Vason, and then as the head of the touring rodeo he founded to highlight the legacy of Black cowboys and cowgirls. With the Bill Pickett Invitational Rodeo (BPIR), the first all-Black touring rodeo, Howard-Cunningham has watched generations of families get the opportunity to compete in and tour to cities they might not have otherwise visited.

Carolyn Carter, who grew up in Spencer, Oklahoma, is a part of one such family. She was introduced to the rodeo by her older sisters before competing for the first time in the 1980s. “They literally threw me on a horse and said ‘Here, just hold on,’” she tells Mic, laughing. “I competed and ran barrels, and I won a lot of money and thought, ‘Oh, that was fun. I could do this again.’” Carter says she was drawn to BPIR by the idea that she could travel and make more money than she was getting in local competitions. “I raised my kids on the road and they’ve been everywhere four times, [all] because of this,” she says. Today, Carter’s daughter and granddaughter are also involved in rodeo.

Howard-Cunningham says all-Black rodeos are a rarity, providing an opportunity for Black competitors to take center stage in front of majority Black audiences in a sport where they are often the minority. “Our goal is to educate and entertain everybody about the history of Black cowboys and cowgirls in the development of the West and to let them know that they exist today. And to inspire our young people,” she tells Mic.

This weekend, 37 years after it was founded, BPIR will have its biggest opportunity to fulfill this longtime mission. The Bill Pickett Invitational Rodeo – Vegas Showdown will air on CBS this Juneteenth at 1 p.m. — the first time an all-Black rodeo airs on national broadcast television. The event was filmed last weekend in Las Vegas in partnership with Professional Bull Riders and will showcase seven events, including bareback and bulldogging, or steer wrestling — the latter of which was created by the late Bill Pickett himself. Pickett, for whom BPIR is named, is a rodeo legend and the first African American cowboy inducted into the Rodeo Hall of Fame at the National Cowboy and Western Heritage Museum in Oklahoma City; his saddle has been on display since the 1980s.

Michael Grauer, one of the museum’s curators, has been working to accurately document the stories of cowboys — including the Black and Hispanic ones who participated in rodeos — for years. “There were always Black cowboys who were a part of [rodeos],” he tells Mic. “For example, in Canadian Texas in 1888, the man who won the rodeo competition was a Black cowboy. Coming forward with Wild West shows, there were always Black or Hispanic people [in] that equation. That’s how Bill Pickett got his rise to fame. He became very much nationally and internationally famous.”

Through his research, Grauer says he’s seen evidence that Black rodeos have long existed, especially in areas that were largely populated by African Americans. “There’s always been Black rodeos,” he says. “There’s a very large circuit in southeast Texas and that’s reflective of the fact that the Gulf Coast of Texas was dominated by Black cowboys; also, in Eastern Oklahoma.” Grauer says his biggest challenge as a curator has been acquiring items that are accurate and specific to Black cowboys, considering they often used equipment similar to white cowboys.

Not all cowboys participate in rodeo, of course — but Black Americans make up a significant percentage of cowboys who don’t, too. Grauer estimates that about 20-25% of the cowboys who were on ranches or trail drives are Black.

Carter describes trail riders — those who enjoy riding horses on various trails, often for leisurely purposes — as the cowboys we often think about when we hear songs like Lil Nas X’s “Old Town Road.” The 2018 song, which currently holds the record for the longest consecutive run (19 weeks) at the top of the Billboard Hot 100, is just one example of Black cowboy culture being taking center stage in popular culture in recent years. Earlier this year, a Today show segment highlighted the “yeehaw agenda,” with an accompanying article noting “Black celebrities are helping solidify the Black cowboy's place in the mainstream — from Solange Knowles’ metallic boots to Lil’ Nas X and his Gucci cowboy hat to Megan Thee Stallion’s bedazzled chaps.” And in April, Netflix released Concrete Cowboy, a film starring Idris Elba and Caleb McLaughlin that’s based on a book about Black cowboys in Philadelphia. Scenes in the film showcase the cowboys not only riding their horses, but also coming together to talk about life and pass on their history. “They live everywhere,” Carter says of the trail riders depicted in films like Concrete Cowboy. “They get together maybe one weekend a month, and they’ll do a trail ride, barbecue, sit around and hang out all weekend.”

Still, Grauer says certain people within the cowboy community have been highlighting the contributions of Black cowboys even before these stories started catching on with mainstream audiences. In the 2006 biography Black Gun, Silver Star: The Life and Legend of Frontier Marshal Bass Reeves, author Art T. Burton argued that the fictional Lone Ranger character, depicted as a white cowboy in popular culture, was actually inspired by Bass Reeves, a formerly enslaved Black man who was the first Black deputy U.S. Marshal west of the Mississippi River. In a 2019 article, Texas Monthly noted that “there’s never been any conclusive evidence linking the two,” but “while Reeves may be the only lawman in U.S. history whose accomplishments exceeded those of the Lone Ranger’s, his life has long remained eclipsed by the tall tales of an imaginary white man.”

As these stories come out, though, Grauer stresses the importance of fact checking them — although given the often oral nature of African American history, that could prove challenging. One belief that has persisted suggests the term “cowboy” was a derivative of “boy” or “cow boy,” a pejorative term used to refer to African American men working with cattle — as opposed to the term “cowhand,” which was used for white men. Grauer says he hasn’t found any records to support this, though. “In my opinion, it’s one of those urban legends,” he says. “It’s entirely possible, but I have not seen it myself.”

Much like Grauer, documenting this history for future generations is a huge goal for Howard-Cunningham, as the head of BPIR. It’s a common refrain during conversations with both Howard-Cunnningham and Carter when discussing the importance of The Bill Pickett Invitational Rodeo – Vegas Showdown becoming the first all-Black rodeo to air on TV. PBR announced its partnership with BPIR during Black History Month earlier this year, as part of the company’s recent efforts to extend the brand’s reach and create additional opportunities for athletes — including women and people of color. The Juneteenth broadcast came together in the months following the February announcement, according to a PBR spokesperson. The hope is that increased media attention might lead to new career opportunities, including potential sponsorships, for some of the Black athletes who participated in the rodeo.

BPIR already has a few teen competitors hoping to carry on the legacy, too — including Colorado residents Savannah and Aleeyah Roberts, 13 and 19. Both sisters started riding horses as toddlers. “I remember going to a local rodeo,” Aleeyah says. “I was watching these little girls do barrel racing, and I was like, ‘That’s what I want to do.’ That’s what started everything.” She eventually inspired her younger sister, Savannah, to compete as well.

Aleeyah and Savannah both participated in this year’s BPIR — Vegas Showdown, although the older sister admits her competition days have lessened now that she’s in college hoping to eventually obtain a medical degree. “We’ve been doing the Black rodeos for quite a while now,” Aleeyah says “Those feel like home to us. For us to have something that important televised, we can’t even describe how it feels.”

Carter agrees, and she hopes families will watch and be encouraged to learn more about the culture. “More kids will see this and that way our culture will continue to grow,” she says.

More like this
8 shows like 'Ted Lasso' to watch if you need more feel-good TV
By Brandon Yu
Can't bear to be in a relationship right now? Blame de-cuffing season
By Suzannah Weiss
The Olympics can't pretend athlete protests aren't happening
By Kara Weisenstein
Stay up to date