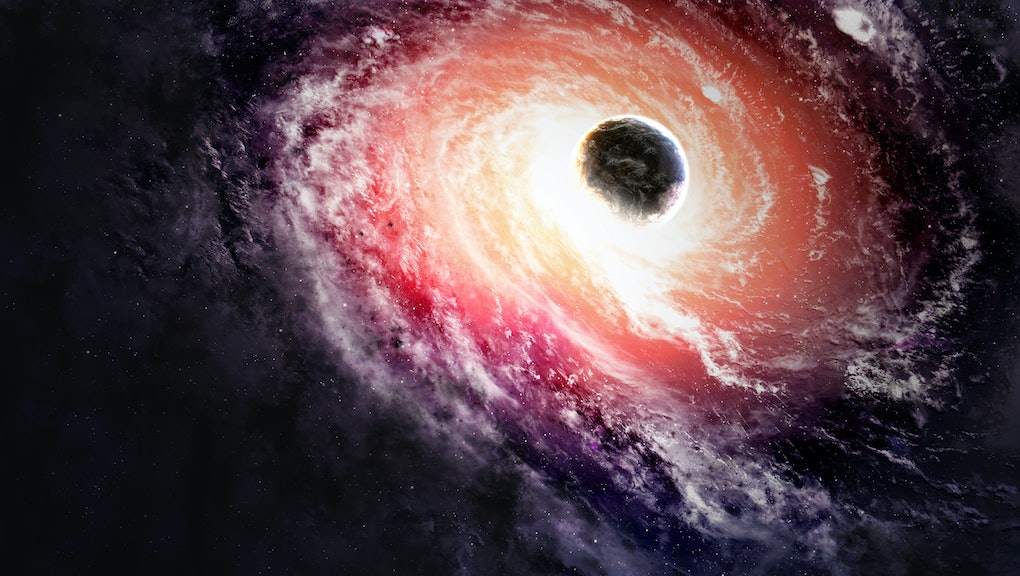 Bravo to Albert Einstein. As researchers and physicists continue to learn more about black holes and their formation, more evidence has appeared to support his theory of general relativity. This theory, to put it very simply, attempts to describe gravity in relation to the oft-changing geometry of space and time (known as 'space-time'). If that sounds really out there, well, it pretty much is.

What does this mean for black holes? According to Science Daily, the theory of relativity predicts that a black hole that's born from a collision of two massive black holes should 'ring' with gravitational waves the same way a bell rings with sound waves. Einstein's theory suggests that the waves of gravity could be measured to estimate the new black hole's mass and spin.

Physicists from M.I.T., along with researchers from other teams, have recently been able to catch a 'ringing' black hole that added more support to Einstein's theory. Additionally, it also provided evidence that Einstein was correct about another thing: Black holes don't have observable 'hair.'

Obviously, the 'hair' of a black hole is not the same type of hair that's on your head. Einstein believed that black holes should only have three properties we can see — mass, spin, and electric charge. Any other characteristics it might have are collectively called 'hair' by other physicists. That 'hair' is likely unseen or non-existent because it's been sucked into the black hole. If researchers found evidence of 'hair' in their measurements, then it would have meant the 'ringing' could indicate more than just a black hole's mass and spin — something beyond what Einstein predicted. But that didn't happen in this study.

Scientists first detected the 'sound' of two black holes colliding back in 2015. The M.I.T. researchers have been working to isolate the data that indicated gravitational waves coming from the newborn black hole. By pinpointing the tones coming from the 'ringing,' they could measure the pitch and decay rate. Since Einstein predicted that the pitch and decay rate is specific to masses and spins, the team decided to test out his theory of general relativity to estimate the mass and spin of the new black hole.

The results were successful. Their calculations matched other measurements of the black hole, giving Einstein further credibility — as if anyone needed any more convincing that the man was a genius! — and hope among physicists that they can study black holes even more effectively than before. "This is exciting for the community because it shows these kinds of studies are possible now, not in 20 years," said the study's lead author, Maximiliano Isi, to Science Daily. And as technology improves further, so will our knowledge of the vast frontier of space.